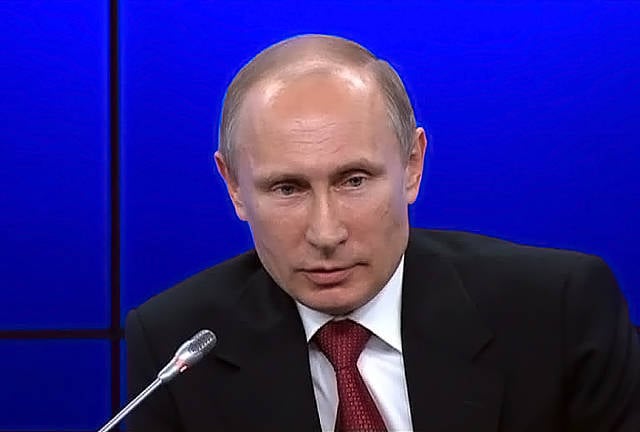 And here is the crisis in Ukraine, where blood is being shed, where the guns are roaring very close to the Russian ear. This is a tremendous unprecedented pressure from the West. Economic, political and even military, because NATO sends its representatives very close to the borders of Russia, to the Baltic countries, to Poland. People wanted to hear words of encouragement, explanations of problems, confused problems. And the president had to answer these problems. The basic idea was that the Americans' attempt to establish a unipolar world, to return to the relapse of 90, when indeed America, having destroyed the Soviet Union, was the most powerful, most indestructible power of the world, turned out to be worthless today. It was she who plunged the world into these catastrophic procedures, into these catastrophic recessions and crises. In response to a unipolar, outdated, old-fashioned and aggressive concept, the world offers a concept not just of a multipolar world, but a world in which many centers of power and many centers of weakness, by the way, will be put into a common security system, harmony and symphony, as philosophers say. The world requires a completely new model. Not only economic, but also philosophical, ideological. This model is groped during Putin’s last visit to China.

How to be in a downturn in our production? This is the biggest trouble. There is a feeling that we did not just stop, but crossed this line and began to drop our industry. Putin proposed to the forum and together the whole country the concept of accelerated economic development. This is a long-awaited Putin's spurt, when in the shortest possible time we must overcome the lag and reduce the negative processes of the economic crisis. This breakthrough is multidimensional. It assumes an economic theory, an economic concept, a new system of organizing the management of industry. He proposes, especially this was evident as a result of Putin’s visit to China, super-projects, super-production, huge mines and gas and oil-producing fields, which we intend to develop with China. It is considered that Russia is a raw materials appendage. What to be a raw material power is simple and unprofitable. But this is a delusion, because creating a resource base in permafrost conditions, inconvenience, lack of roads, and in the most diverse dangers is a tremendous civilizational economic, political and military task.

What is worth, for example, ensuring the safety of our developments in the Arctic, which have already begun and provide the first gas tons? And what about the creation of a gas flow control system? A unique, universal, all-Russian gas supply system was proposed both in the east and in the west. Creating the world's largest gas development complex in Eastern Siberia. And on the basis of this huge giant field, this construction site - the creation of cities, roads, settlements, new technologies. Is this not a locomotive that drags a huge number of industries, large and small, thin and elegant, as well as strategic, such as railways and highways. All this is possible not just by creating a favorable investment climate, it is not easy when creating new personnel, new engineering and scientific schools.

This is only possible with a common business philosophy. When we all together consider that the work on the modernization of our economy, our technical revolution in the conditions of crisis, in the conditions of attacks, in conditions of deformation - this is our huge, national task that captures not only gas industry workers, not only economists and financiers, but all, and rural schools, and writers, and priests. This philosophy of the common cause has been proclaimed. This is a long-awaited call for the people to unite, finally, in the face of external and internal difficulties.

And how is Ukraine? How many attacks on Russia for interfering in the affairs of Ukraine and not leaving this supposedly unhappy republic alone? It was said that the NATO attempt was the culprit in today's crisis, having overthrown Yanukovich, to establish here full Western control, up to and including missile defense systems in Ukraine, up to nuclear and military-strategic missiles near Kharkov. That is why as a result of these brazen disgusting and violent methods, a coup d'etat was completed and this terrible war was unleashed in the south-east of Ukraine. And the Crimea, which Putin literally snatched from under the noses of the NATO generals, was rescued from the monstrous Odessa fires, from the monstrous crematorium, which the Kiev authorities carried out in the Odessa House of Trade Unions.

Much has been said about the so-called reboot. How many illusions were hung in the air at the moment when Hillary Clinton came here, pressed some kind of stupid plastic button. It seemed that here came the eternal long-awaited peace and cooperation. Nothing like this. All this was again broken, all this was again plunged into dust as a result of this treacherous, arrogant, unstoppable and irreversible Western American policy of domination. Once, I repeat, dominance was possible. But not now, when the Russian state, when the self-consciousness of the Russian people turned out to be so strong and powerful, that it does not allow such manipulations with itself.

Putin’s speech at the international forum was harsh, calm. It was not aggressive. Leave a huge field for further negotiations. It was ironic, when several times quite risky jokes, the president made the audience laugh. Today’s time of change, when Russia enters an unknown river, is potentially dangerous. And at the same time potentially creative, potentially educational. Listening to the President of Russia, it seemed to me that I guessed in his intonations, in the expression of his face, many of those experiences, hopes, as well as fears and fears that ordinary Russian citizens feel, I myself experience.