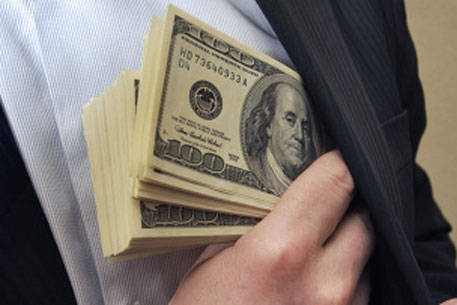 According to the chief military prosecutor Sergey Fridinsky, every year about a fifth of the Russian defense budget is plundered by corrupt state officials and contractors, while depleting the state budget and thereby reducing the combat readiness of the Russian armed forces.


This information was published by the Rossiyskaya Gazeta on Tuesday, a few days after several high-ranking military officials were dismissed by Russian President Dmitry Medvedev for failing to comply with government agreements. In Stalin's time, Medvedev warned, officials would have been in prison long ago.

The president of Russia, who is desperately trying to get out of the shadow of Prime Minister Vladimir Putin, in the run-up to the upcoming presidential elections has intensified the country's campaign against corruption.

Sergei Fridinsky, in an interview he gave to Rossiyskaya Gazeta, said that huge budget funds that are sent to buy weapons, every year, are deposited in the pockets of crooks.

The fraudulent and fictitious documents about the alleged work, "kickbacks" during the implementation of government contracts - all this is in service with fraudsters, says Fridinsky. As a result of such scams, a lot of money is being plundered, in fact a fifth of the budget. As a result, poor-quality military equipment and weapons continue to flow into the armed forces.

The chief military prosecutor said that this year several contractors and military officials were convicted or fined as anti-corruption intensifies.

Experts confirm the facts of fairly widespread manifestations of corruption in the army. But at the same time, they believe that the situation is more depressing than the prosecutor says.

The head of the non-state anti-corruption committee, Kirill Kabanov, said that 20 percent is a low estimate. 40 percent more like the truth.

He stated that this interview is an attempt by the authorities to enlist the support of fellow citizens on the eve of the upcoming presidential elections.

Kabanov says that the Fridinsky interview is directed at society. It is impossible to overcome corruption without public support. Corruption affects almost everyone, and almost everyone participates in it.

A similar opinion and political commentator at the Carnegie Moscow Center Nikolai Petrov. He believes that the Kremlin, with the help of an interview with Fridinsky, is trying to show fellow citizens that he is in control of the situation and is trying to deal with issues in the Russian army.

Petrov declares that the private and officers up to the middle level will be happy if many generals are convicted.

At the same time, according to the observer, the revelations of S. Fridinsky can also display a conflict between prosecutors, investigators and the military. In this way, Fridinsky tries to shift the responsibility onto others and thereby protect himself.

Corruption in the Russian army can negate the efforts of the Russian Federation to modernize it and improve the combat capability of the troops. Over 650 billions of dollars are planned to be sent to the defense sector up to 2020 during the largest military reform in the last 30 years.

At the same time, the military prosecutor in the Far East on Monday said that in Vladivostok, in order to hide the facts of theft of food by officers, the servicemen were fed dog food.
Ctrl Enter

We are in Yandex Zen
About Stalin and Khrushchev
Independent expert report "Putin. Corruption"
7 comments
Information
Dear reader, to leave comments on the publication, you must to register.