Strategic goals and tactical objectives of the people's republics 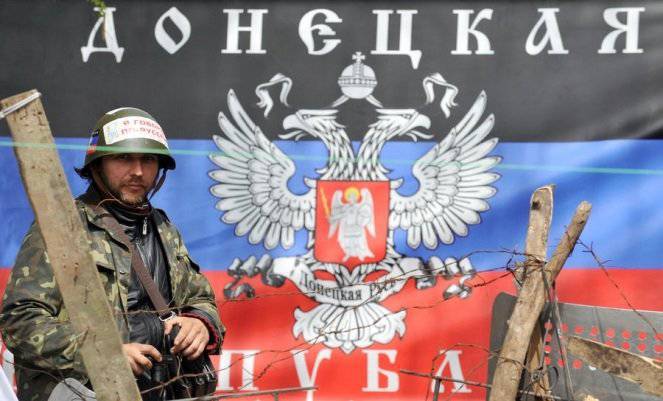 Despite the military punitive operation and the provocations of the so-called “National Guard”, the referendum was held with a high turnout in both republics and confirmed de jure the status of the republics. De facto, both republics, especially Donetsk, confirm their existence with successful defensive actions, starting in April. Both republics in different situations now face identical tasks. The primary issue that unites the whole range of current problems and tasks of the DPR and the LPR is the reflection of the military aggression of Ukraine. The security problem, of course, should be resolved jointly. Understand this in the republics themselves. So, the co-chairman of the DPR government Denis Pushilin said in an interview to the Russia 24 channel: “We believe that we need to go together.

Preliminary talks have already been held. At the moment, you need to figure out how it will look technically. "
The question, however, is not technical. The current framework of cooperation will largely determine the fate of the entire region. Donetsk - clearly occupies a leading position in the newly formed tandem, however, it is him who accounts for the main pressure from Ukraine.

The current format within the two independent republics is an intermediate result. The consolidation of efforts, primarily in the area of ​​external security, will increasingly inexorably draw the republics at least towards a formally confederative organization, with single armed forces. However, this stage may not be necessary if the parties agree to merge into one state.

The potential of a single political space is much greater than it might seem at first glance. However, it is directly linked to the issue of the current status of the punitive operation. If Ukraine does not withdraw its units from the territory of the DPR, the republics will have to forcefully try to drive them out of their territory, and then go on the offensive.

At the same time, close attention should be paid to such key points as Mariupol, from which, hypothetically, the sea could receive direct assistance from the Crimea, Slavyansk / Kramatorsk / Krasnoarmeysk - which are railroad cars and “gates to Donetsk”. Deblockade and strong control over these points will not only ensure the stability and security of the DPR, but also become a springboard for possible offensive operations against the aggressor to liberate the Odessa, Kherson, Nikolaev, Zaporozhye, and Kharkov regions. In cases of establishing control and unification of these regions in one federal, confederative or unitary state, new opportunities will open up for changing the situation throughout Ukraine in a more favorable direction.

In the meantime, such prospects are rather illusory, since the forces involved in the punitive operation, their weapons and material and technical equipment, far exceed the self-defense forces of both republics. The weak side of the Ukrainian grouping is low combat capability, due to the current reorganization of the army and the disgusting morale of almost all units, with the exception of the National Guard, which, however, is not prepared and equipped for serious offensive operations. All this creates a certain time reserve for the organization of state institutions, the development of strategies for further action.

Of the other actions that do not require delay, should be highlighted:
1. The search for any possible assistance, moral, informational, material, military. Natural allies in this matter are: first of all, Russia, Transnistria, Abkhazia, South Ossetia.
2. Ensuring control over the border with the Russian Federation and the stability of the transport corridor from the border to Donetsk, through Lugansk.
3. Clearing the information space from the Ukrainian media from television to print media.
4. Party building, which includes a ban on the activities of any Ukrainian parties and movements, as one of the many steps to build an independent political space.
5. Entry into the ruble zone and further financial and economic integration with the Russian Federation.
6. The nationalization of all Ukrainian enterprises, and selective, in relation to the Ukrainian oligarchs, showing no loyalty to the new republics.
Summarizing the above circumstances, it is possible to assess the current situation of the young republics as difficult, due to military confrontation with a superior opponent, but promising, since This confrontation forces the republics to force political integration, to build their own armed forces and a financial and economic system capable of ensuring the armed forces and fulfilling social obligations to the population.
It remains unclear the prospect of equipping the armed forces of both republics with a sufficient number of small arms, not to mention the armored vehicles that will be needed to ensure stable control over the currently blocked settlements and transport arteries.

The question of joining Russia

The question of the republics becoming part of Russia, raised by the people's authorities the day after the referendum, is likely to not be resolved in the short term. Given the refusal of President Putin’s request to postpone the referendum, the rather moderate official reaction of the Russian leadership in the form of the following message from the presidential press service is clear: "Moscow respects the will of the population in Donetsk and Lugansk regions and assumes that the practical implementation of the results of the referendums will take place in a civilized way, without any recurrence of violence, through a dialogue between representatives of Kiev, Donetsk and Lugansk. In the interest of establishing such a dialogue, any srednicheskie efforts, including through the OSCE. "

In the current difficult, but fairly stable situation in the DPR, Moscow has time to determine its position on the status of the republics and the next steps towards Ukraine, whose debt for gas has already reached 18,5 billion dollars.
Perhaps the Russian authorities believe that the separation of the southern and eastern regions is rather destructive for the overall process (see http://shumilov1989.livejournal.com/768.html). If they were retained as part of Ukraine, they would influence the situation from the inside, and could, through upholding their rights, with the support of Russia, lead Ukraine to federalism, which would be an undoubted benefit, both for the citizens of this country and for all its neighbors. Federalization would contribute to national reconciliation, and in the event of its failure, national demarcation, within the legal framework, followed by the peaceful separation of Ukraine.

Ctrl Enter
Noticed oshЫbku Highlight text and press. Ctrl + Enter
We are
Military reform as an integral part of the security concept of the Russian Federation: Systematic dynamic assessmentRevealed the secret of provocation in the American Boston
Military Reviewin Yandex News
Military Reviewin Google News
31 comment
Information
Dear reader, to leave comments on the publication, you must sign in.