Another political crisis in Turkey 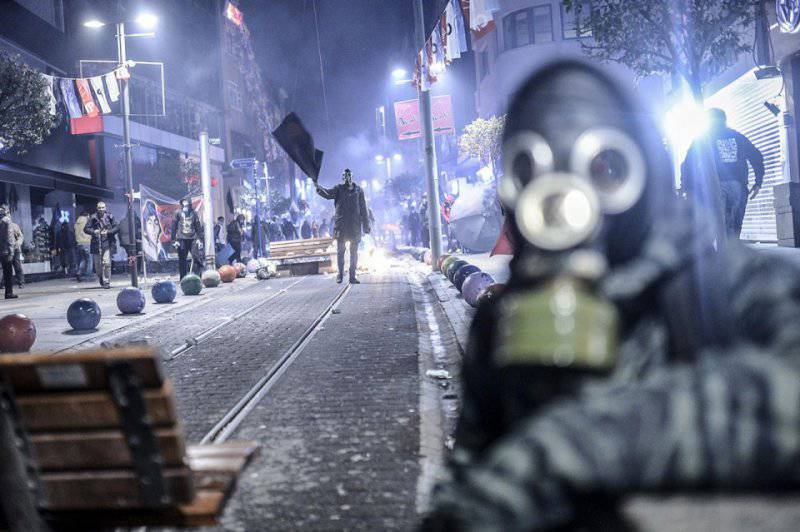 The accident at the Turkish mine in the city of Soma remained virtually unlit in the world media. Leading TV channels and print media still talk about the events in Ukraine, without being distracted by secondary topics. Meanwhile, the death of almost Turkish miners 300 can have far-reaching consequences for the Middle East and South Caucasus: the tragedy has become a catalyst for protest sentiments in all regions of Turkey. Hundreds of thousands of people took to the streets in Ankara and Istanbul; The province did not stay aside. Every day, the position of Prime Minister Recep Tayyip Erdogan weakens, and it is possible that he will soon be at the dump stories.

The accident at the mine located in the city of Soma, 17 occurred in May, and has already gone down in history as the largest disaster in the history of Turkish coal mining. According to official figures, the explosion took the lives of 292 people. About ten workers remain locked underground. However, there is no hope that they managed to survive: the rescuers are preparing to remove the next bodies from under the rubble.

In total, more than 700 workers worked in the mine, half of them were evacuated.

The massive death of miners caused dissatisfaction with the trade unions. It is about the attitude of the state and large businessmen to human life: the tragedy could have been avoided if the owner of the mine had taken care of the safety of the workers in time. The first call for mass protests came from the Confederation of Workers ’Revolutionaries, also known as the KPRR. The organization appealed to the residents of Ankara with a request to wear black clothes and take part in the march to the building of the Ministry of Labor. The miners were quickly joined by representatives of other professions - doctors, architects, engineers, and civil servants.

It is symptomatic that employees of the state apparatus are more radical than all. They called the events in the mine in the city of Soma "massacre", which occurred due to the fault of those who saved on the means of security for the sake of extracting the greatest profit.

As is usually the case in Turkey, the demonstration ended with a series of fights between the protesters and the police. Trade union marches were broken up in Ankara, Istanbul, Izmir and Soma. For this purpose, special means were used - tear gas and water jets.

Union of Islamists and Liberals

The main reason for the aggression of the protesters was a large number of liberals who were in the columns of demonstrators. Liberals are longtime enemies of Recep Erdogan and the Islamist party he leads. They skillfully took advantage of the tragedy in order to once again demand the resignation of the Prime Minister, and they were not mistaken: the “instituted” crowd began to destroy everything in their path, hoping to avenge the death of the miners. People's anger was artificially directed in the right direction - after all, Erdogan is not to blame for the death of people. The maximum who should bear responsibility is the Minister of Labor, under whose administration incompetent cadres were located. It is foolish to dismiss the entire cabinet, regardless of the political orientation of its members.

In addition to the liberal opposition, the Prime Minister is also opposed by President Abdullah Gul, who is also a representative of the Islamist Justice and Development Party. The fact is that Erdogan wants to take the presidency, since according to the constitution no one has the right to head the government three times in a row. It would seem that here is difficult - Gul becomes prime minister, Erdogan - president.

However, there is another nuance in Turkish law: only a member of parliament can hold top government positions. Abdullah Gul does not have a deputy mandate, which means that he has been ordered to go to the premiere. In such circumstances, it is important for Gul not to allow Erdogan to win in the upcoming presidential elections, including through provocations. The President wants to present the Prime Minister in the eyes of the public as an absolute evil. Opposition rallies in the largest cities of the country are very beneficial to him. And if there are also numerous victims on both sides, we can talk about the political death of Erdogan.

Opponents of the Prime Minister is his former colleague Fetullah Gulen. This radical preacher criticizes the Turkish authorities for their lack of loyalty to the ideas of the Islamic state, and suggests introducing Sharia law in Turkey. Gulen’s supporters are everywhere - in the army, in the judiciary, in the executive branch. For example, the Constitutional Court of Turkey went against Erdogan only at the personal request of Gulen. The influence of this preacher on the internal affairs of the republic is difficult to exaggerate.

The actions of numerous opponents of the Prime Minister have been effective. The goal - to bring down the political rating of Erdogan - was achieved. Numerous corruption scandals and internal party clashes did not play into the hands of politics, and there was also a catastrophe in one of the mines - how can one not think about completing a political career? Does it make sense to run for the next presidential election, if you are accused of all imaginable and unthinkable sins?

Currently, there are two opposing views on how events will develop in Turkey.

On the one hand, the motley Turkish opposition is rapidly gaining points, and street protest is becoming more and more radical. In such circumstances, Recep Erdogan requires maximum restraint - only in this way can he become president. This view is shared by Vladimir Avatkov, a Turkologist and a lecturer at MGIMO.

On the other hand, numerous protests that swept Turkey back in May last year have not yet led to significant changes in the government. The current crisis will not change anything, because over time, the death of 300 people will be forgotten. In the end, it was not Erdogan who killed them. So, in the near future, the prime minister will have a real chance to become the next president of Turkey - this is the opinion of Yevgeny Satanovsky, head of the Middle East Institute.

However, in both cases, the opposition will try to do everything possible to cause Rexhep Erdogan the maximum inconvenience, turn him into a scarecrow for Turkish voters. Everyone will take part in this dirty game, starting from pro-Western liberals and ending with supporters of radical Islam. Toys in the hands of politicians will be trade unions, students, just disgruntled citizens. Of course, it will not do without professional militants: according to the Turkish press, they are now actively training.

Toy in the hands of others

Nor does the international situation favor Erdogan. Despite the fact that the United States pays maximum attention to events in Ukraine, reformatting the Middle East remains one of Washington’s priorities. The fact that now America does not interfere in the internal affairs of Syria does not at all mean that Damascus has been forgotten, and Bashar Assad does not need to fear external invasion. Tensions are still ahead, one has only to wait for the outcome of events in Ukraine.

Turkey has been given a leading role in destabilizing the situation in the Middle East, although it was not warned about it: having achieved destabilization in Asia Minor, the United States will finally destroy the existing system of relations in the region, and it will be possible to build a new reality on the ruins of the Middle East.

Ideally, for the White House, Turkey must either declare war on Syria or plunge into the chaos of civil confrontation. The war did not work: in 2011-2013, Ankara did not dare to directly engage in a bloody conflict, despite numerous casus belli. Turkey limited its informal support to militants who oppose Bashar al-Assad and the suppression of the Kurdish liberation movement in the border areas. Therefore, Washington put into effect plan “B”, making a bet on the internal destabilization of the republic. Relying on the corrupt ruling elite, America has been systematically swinging the Turkish boat since last summer. Each new round of demonstrations is becoming more bloody, the gap between the people and politicians is increasing, the mutual hatred of opponents is growing ...

However, Erdogan, in spite of all his rivals, is confidently holding himself in the prime minister’s chair. Contrary to the whims of the West and radical Islamists, the country's leader confidently copes with all the adversities. It seems that he will be able to overcome and demonstrate in connection with the death of the miners, and then Turkey will have a new strong president, with whom, of course, Russia will have to deal with.

Ctrl Enter
Noticed oshЫbku Highlight text and press. Ctrl + Enter
We are
Who blew up Turkey? The explosion in Istanbul and the "wave of terror" on Turkish soilTragedy in Ankara. Who blows up Turkey?
Military Reviewin Yandex News
Military Reviewin Google News
14 comments
Information
Dear reader, to leave comments on the publication, you must sign in.