Alexey Pushkov: We do not recognize black as white. What they want from us to achieve sanctions 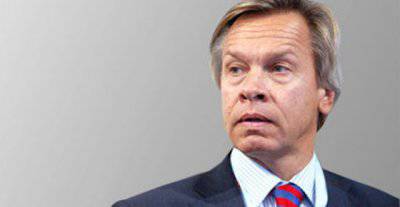 When lately Barack Obama has been thinking about Russia, then one thought ousts all the rest from his head: sanctions. No, there are, however, two intentions: isolation and deterrence - the very concept of deterrence that underlay the US foreign policy during the Cold War. Obama has no other thoughts. Lack of thoughts every day at briefings confirms State Department spokesman Jen Psaki, who really can't answer a single question about Russia. “Psaki will tell you in detail where she did the manicure and styling, but otherwise she’s not strong,” one Muscovite tweeted. Exactly.


The point, however, is that the sanctions will not change what is happening in Ukraine. They will not force people living in the Donbass, Slavyansk, Kramatorsk, Lugansk, Mariupol to stop thinking the way they think. Reflecting on how to punish Russia, Obama forgets that in the south-east of Ukraine there are not puppets, but people who disagree with the fate prepared for them by Kiev. In recent months, these people have refuted the idea of ​​them as a gray, apathetic, depressed mass implanted by the American media. They also refuted Turchinov's delirium about some terrorists who allegedly seized power in the Donbass and Lugansk. They also refuted the abominable reasoning about them as a “cattle” on the part of a new race of gentlemen, growing under the Bandera portraits in Kiev and in the western regions of Ukraine.

They denied that they came in large numbers and spoke at a referendum on how and in what country they want to live.

Whether the results of these referendums in Kiev, Washington or Brussels are recognized does not matter. Because the result is obvious. The result is on TV screens all over the world, except for present-day Ukraine, where they simply did not show long lines of people who want to vote for independence from Kiev, and Poroshenko argued that there were no people on the sections of the people, and all the signatures were put by terrorists. Of course, for the Turchinovs and Poroshenko, all the inhabitants of the Southeast are terrorists and bandits. All - up to women and the elderly.

As the columnist of the French edition Le Monde noted, “in the mining towns of Slavyansk and Donetsk, the referendum sometimes seemed like a huge popular gathering. Many of the people who came to the polling stations were convinced that the “question of survival” was being resolved for them. And they are right.

Our western counterparties have long argued that the right-wing fascist threat in Ukraine is greatly exaggerated by Russia. But now the Ukrainian fascist movement has its own symbol - the burnt House of Trade Unions in Odessa. And it is impossible to get away from this. Odessa business, as we know, was not limited. There are numerous victims in Slavyansk, Kramatorsk, Mariupol. We perfectly saw the shots in which snipers simply shoot people standing on the street. And he is responsible for all these deaths none other than the power entrenched in Kiev.

In conditions when this power sent troops against its own people and lost any legitimacy, sanctions must be taken against it. However, sanctions are being taken against Russia. What do they want from us? So that we do not see burned, killed and strangled in Odessa and in Mariupol? We cannot do this. So that we turn a blind eye to the results of the vote in Donetsk and Lugansk regions, where did people express their will? We cannot do this. So that we recognize the legal regime in Kiev, which in response to the demands of its citizens in the southern and eastern regions of the country sends there Tanks and armored personnel carriers? We cannot do this. They want us to acknowledge that black is white. But we cannot do that.