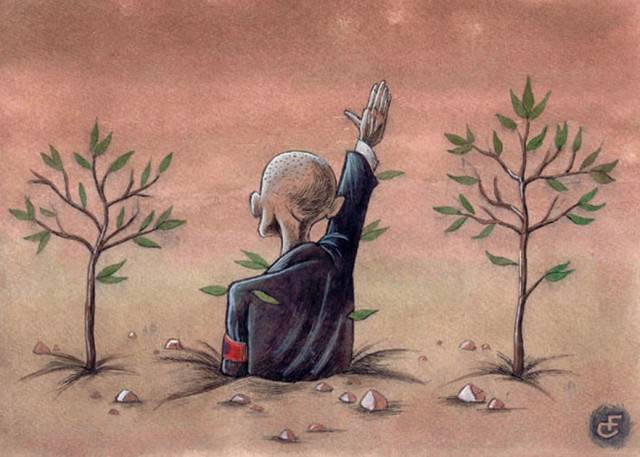 The Lausanne court ruled that the Nazi salute is not always punishable, according to Fox News.

This is not the final straight. This is - the exit from the track, if in the language of auto racing. Apparently, the tragic comedy “Kranta Evropy” enters its final phase. Otherwise, this can not be regarded.

According to the decree, the traditional Nazi greeting is not racial discrimination if it reflects a person’s personal beliefs and is not aimed at spreading racist ideology.

Well, yes, the Nazis, by their personal convictions, everyone adores children and all vegetarians. And the rest is the machinations of the enemies of democracy and opponents of tolerance. Or what else to call it.

The ruling overturned a lower court decision issued earlier to a person who publicly demonstrated the Nazi salutation, accompanied by the statement "Heil Hitler" during the rally at the 150 man.

Yes, really, that clung? This scream does not call for killing blacks or anyone else there. True? True.
I did not expect that in a quiet and calm Switzerland, this would come out. Had a good time, didn’t put you in the death camps, tanks did not plow your banks ... A Pity. Then you would think, to whom you sing glory, idiots.

The gesture of the Nazi salute (“ridge” in Russian) is now a criminal offense in Germany, Austria and the Czech Republic. The rest, apparently, not to such details.

Apparently, the Swiss finally demolished the roof of his mind. Well, they did not have a spawn of Mazep, Shushkevich, Bander, who would fight the evil of the world. And apparently, I want to have this.

Gay, Europe, where are you going? Where is the limit of the fall of morality?

In April, 2014, the Russian State Duma adopted a law that introduces criminal penalties of up to five years in prison for rehabilitating Nazism. Here, lure, eat.

Apparently, in their sanctioning tricks, in Switzerland they reached the handle. All in Europe have calmed down, only the Swiss continued to invent more byaki to Russia.

But here you are boys and girls, in vain. This is an exhaustive search.

The first deputy chairman of the State Duma Committee on Public Associations and Religious Organizations, Mikhail Markelov (EP), called the Swiss court decision on the resolution of the Nazi salute a "cynical and despicable approach." And for the first time in the last seven years, I agree with United Russia.

"There is a complete feeling that the world has gone mad, and Europe is racing by leaps and bounds into the embrace of Nazism. The Swiss decision, however, is not surprising: during the Great Patriotic War, the Nazis kept their money in Swiss banks. And it is quite likely that for Switzerland rather than the welfare of ordinary citizens, "- said RIA News Markelov.

In the State Duma they are outraged by the resolution of the Nazi salute in Switzerland. Deputy Chairman of the State Duma Security Committee Ernest Valeev said that such a decision of the court can only be surprising.

“The wording itself already contains a logical contradiction. The fact that a person acts according to convictions cannot affect the public’s assessment of this act. If there is an objective side in the actions themselves that contain signs of a crime, then the person did it because of personal convictions, or of any other convictions, in principle, for qualifying these acts as crimes, does not matter. Therefore, apart from surprise, this court decision can not cause anything, "said the deputy.

Well said. Because as a deputy. But I'm not a deputy, I will say simply: “Have you already been completely fucked there?”. This is no longer conchita, this is the end. The end of morality and ethics.

The impression that in five years Europe will turn into some kind of anomalous zone, where there is no place for anything human.