Bandera symbolism equate to the fascist 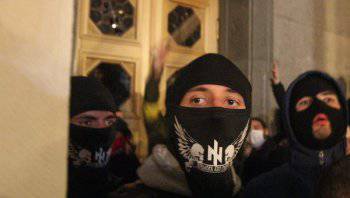 According to RIA "News", the deputies of the State Duma of the Russian Federation adopted in the first reading a bill providing for the equalization of the symbols of organizations that collaborated with the fascists, including the followers of Stepan Bandera, to the Nazi.


The amendment was prepared for article 20.3 of the Code of Administrative Offenses of the Russian Federation (CAO), which provides for punishment for the public display of symbols or attributes of organizations conducting extremist activities.

According to one of the authors of the bill, the Vice-Speaker of the State Duma, Sergei Zheleznyak, at the moment activists are promoting Nazi and extremist activities with the help of paraphernalia and symbols of organizations that collaborated with the Nazis during the Great Patriotic War. In particular, such organizations took an active part in the Ukrainian coup, using the symbolism and attributes of the nationalist movement Stepan Bandera.

The new bill will increase the effectiveness of measures aimed at countering extremism, Nazism and fascism, as well as other actions that insult the memory of the tens of millions who died in World War II, summed up Zheleznyak.

Ctrl Enter
Noticed oshЫbku Highlight text and press. Ctrl + Enter
We are
The State Duma discusses a bill on responsibility for the public use of fascist and collaborationist symbolsThe State Duma adopted in the first reading a bill on "foreign agents"
Military Reviewin Yandex News
Military Reviewin Google News
59 comments
Information
Dear reader, to leave comments on the publication, you must sign in.