NATO wants to take Georgia "to be friends against Russia" 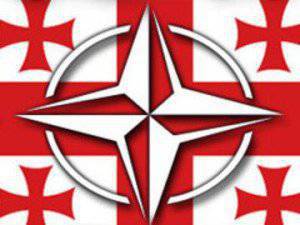 Against whom are we friends? .. This absurd, at first glance, phrase is most often pronounced as a joke. But only on the everyday, simple human level. If it comes to politics, and especially military politics, the phrase often acquires a very real meaning filled with unkind content.


In this case, we are talking about such a military-political monster, like NATO.
As you know, the North Atlantic Military Union was formed in 1949 year as a force designed to counter the "Soviet threat" to the Western world. There was that “threat” or it was only invented - God be with him, with the deeds of bygone days! The confrontation between the East and the West existed, and now we will not speak about the ideological background.

Again, it is well known that soon after the formation of NATO, the Soviet Union asked to be accepted into this organization. However, this proposal was followed by a refusal. What is failure in this situation? The designation of the purpose against which the organization is created.

The next step of Moscow was not difficult to foresee. In 1955, a new structure appeared on the military-political map of the world - the Warsaw Pact Organization, designed to oppose NATO.

The confrontation between NATO and ATS was largely determined by the international situation in the second half of the 20th century.

Today the "Soviet threat" is gone. The Warsaw Pact was scattered. No more Soviet Union ...

So against whom is the Western world now friends?

Yes, the Soviet Union is no more. But Russia has remained! Let a weakened, torn by internal contradictions, with an economy breathing incense, an endlessly weakening ruble ... And yet still trying not to give up its position as a strong power, trying to escape from the protracted crisis, Russia has innumerable treasures!

It is the desire to possess our treasures and is the cornerstone of the structure, whose name is NATO.

However, if it is taken by and large. If, in particular, each member country of the military-political bloc has its own goals. If the United States strives for world leadership, then many small states, like sticking fish, simply wish to get into the community of strong ones in order to be drunk with crumbs from the master's table.

Illustrative example. By initial position, each member state is obliged to allocate two percent of its GDP to the needs of NATO. In reality, this condition is fulfilled by only a few states, the rest of the costs of maintaining the unit have been reduced. So it turned out that today 72 percent (this is according to official data, and according to some data, and more) the funds in the NATO budget come from the US. Already this circumstance shows who is primarily interested in the existence of the block.

So, the North Atlantic bloc in its current form was formed over the years 65. Since the collapse of the USSR, its borders have made a breakthrough to the borders of Russia, and today they are crawling on our country from several directions.

And on the issue of the expansion of NATO to the east, Georgia occupies a special place.

Today, Georgia has the status of "participant in an expedited dialogue." That is, it is a kind of candidate for joining NATO, but this seems to be by no means guaranteed. Like, let Tbilisi fulfill all the demands made to it, and then we will see what to do next.
Why should the leadership of Georgia join this structure, of course. This raises the status of the state, it activates contacts of the political and military elite with foreign colleagues, it allows you to place foreign bases on your territory, which automatically means the creation of new jobs and replenishment of the state budget. For the average person, an increase in the country's security is declared, to which the average person is usually conducted, but only then the grandmother said it in two. However, during the January 5 referendum, 2008 of the year, 77 percent of the country's population voted to join the Alliance.

Why Georgia’s entry into NATO is beneficial for the United States is also understandable. Georgia would become the most eastern member of the Community, it would become the outpost of American influence in Transcaucasia, it would cut off Armenia from Russia, and indeed Washington would have a new lever of pressure on Moscow ...

However, NATO is not a pocket toy of the United States. It is an organization in which there are 28 member states; and not all of them agree to play the role of Obama's Bologna.

First of all, the admission of Georgia to the Alliance contradicts the 10 article of the North Atlantic Agreement, according to which only European states can join NATO. Although the Agreement is so not serious, it is possible to make additions-changes to it. There are obstacles and more difficult.

A state that becomes a member of NATO, in fact, is under the protection of all the military power of the Alliance. However, the stick - about two ends! The alliance must also be sure that it is replenished with an adequate articulate member, whose actions are predictable and controlled, and therefore will not lead to any surprises. As for Tbilisi, Brussels has no such confidence here - one has to expect anything from the hot Caucasian guys. And this is today! And what can happen when especially zealous Georgian politicians feel that power behind their back?!.

And hence the question ... What is the interest of France or Germany to quarrel with Russia because of Georgia’s unpredictable ambitions? .. Well, there’s no reason! Therefore, they are not thrilled by the fact that the Caucasian factor will not be predictable in NATO.

The current events in Ukraine, attitudes towards them from Europe clearly show for whom the West is ready to unite, and who cares less. Georgia is clearly in the second category.

However, you should not flatter yourself. Recent events near the Russian borders show that our ideological work in neighboring countries, unfortunately, has slipped too often lately. Today, when the attention of the whole world, in any case, a significant part of it, is riveted to the events in Ukraine, it's time to stretch the decision on Georgia under NATO, for example.

You shouldn’t indulge yourself with illusions: if such a thing happens, a serious blow will be dealt to Russia's interests in the South Caucasus. After all, this act is automatically materialized into bases, which will be targeted by the entire Southern Federal District; today, Tbilisi is begging from its Western patrons of the air defense system. As mentioned above, Armenia and the contingent of the Russian army and the Border Troops located on its territory will be even more isolated. If we take into account that Yerevan is already subjected to constant political pressure from the West, that there are many pro-Western politicians in Armenia who advocate weakening Moscow’s position in the region, an additional factor in the hands of anti-Russian forces may well play its negative role for us.

But even this is not important! The main thing will be the fact that there will be a precedent of violation of NATO's statutory documents restricting exit from Europe. Already today, NATO headquarters has individual partnership plans with Azerbaijan, Armenia, Kazakhstan ... And although I don’t want to believe in a similar scenario of development of the situation, life shows that it is better to be ready for anything. The coverage of the North Atlantic bloc of Russia from the South to the Chinese border is an extremely undesirable, but by no means impossible, prospect of the development of the situation in the case of the implementation of the option with Georgia.

But back from the hypothetical future to the real present.

Today, Russia's task is to hinder Georgia’s intention to join NATO in every possible way. In order to achieve this result, Western politicians should realize for themselves the danger of such a decision.

The most important thing is that the situation in Georgia itself, as well as at its borders, is too unstable. The situation with Abkhazia and South Ossetia is widely known - after the military conflict that entered history as the “08.08.08 War”, these republics declared their independence, which was recognized by Russia and just a few small states. However, the situation in Ajaria is heating up.
Georgia is a country with an overwhelming predominance of the titular nation. Of the approximately 4,5 million inhabitants of the country, almost 85 percent are ethnic Georgians. Yes, even more than a half million settled outside the country - but this is so, by the way.

So, in Georgia, as usual in the states with an overwhelming numerical superiority of one nation, all its key posts are occupied by its representatives. Accordingly, Armenians, Azerbaijanis, representatives of other nations are disadvantaged; and especially for Russians.

The presence of foci of ethnic tensions, both existing and potential, greatly alarming the West. Many NATO countries have similar problems, and why should they voluntarily add an extra headache to themselves?

Again, we have to remember the global crisis, which makes tightening the straps and the state with a developed economy. Meanwhile, they are the ones who have to pay NATO expenses for themselves and for that guy. As for Georgia, its economy today is completely collapsed. 10,5 billion dollars of debt, 16 percent of unemployed, 31 percent - below the poverty line ... What contribution can it make to the collective piggy bank of the Alliance? .. And who needs such a freeloader? ..

But politics, politics! .. It was she who makes NATO bureaucrats shut their eyes to all these risks. Pressure on Russia should be continued and increased - this principle guides Washington and Brussels. And they do it too often. Especially now, during the growing civil war in Ukraine.

As already mentioned, three quarters of the Georgian population were in favor of joining NATO. Accordingly, the remaining quarter should be the basis for holding in society the idea of ​​the destructive course of the country's accession to the militant alliance. To solve this problem for Russia is a must.
As well as to prevent the point of view of the need for Georgia’s participation in the alliance to win in NATO itself.

If this happens, Russia will suffer another political defeat. And God forbid that only political.