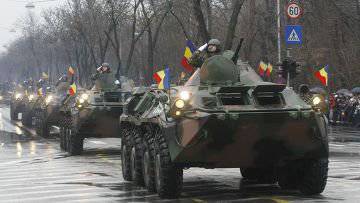 What can be done when the economy collapses before our eyes, and the population does not believe in a bright European future?


Romanian politicians have found the answer to this question, if not the original, then at least one that has proven its effectiveness over the long term: they decided to bring the country into a state of mass pre-war psychosis.

The crisis in Ukraine became manna from heaven for the Romanian Russophobes, because it provided an opportunity to distract society from internal problems and focus it on external ones. The puppet media, together with the president and the prime minister, began to unleash pre-war hysteria, calling Russia the main external threat against Romania.

Traian Basescu, known for his sympathy for Antonescu, an ally of Adolf Hitler, presented to his people his vision of the crisis in Ukraine. According to the Romanian president, "Putin looks at the mouth of the Danube with anguish." Prime Minister Victor Ponta, despite his strained relations with the president, joined his efforts to increase panic. During a visit to an aircraft manufacturer in Craiova, Victor Ponta said that “although we are threatened by war, good news is that you will have orders. "

Some actions of the Romanian authorities are puzzling and disturbing. The process of mobilization into the army was modernized in an emergency way, and local authorities developed lists of property that could be requisitioned in the event of war. All these actions were committed publicly emphasized.

Romanian politicians are not limited to this. To translate the psychosis into an acute phase, statements have been made that go beyond the diplomatic framework. Traian Basescu spoke contemptuously about the combat capability of the Russian army, stating that “the Russian Federation does not have an army since the withdrawal of troops from Afghanistan 15 years ago (as in the text - ed.), And Romania has 40 000 military personnel who only that completed the mission in Iraq and Afghanistan, so that it is highly skilled troops with the appropriate military equipment. "

With obvious pride, the President of Romania spoke about the Western military equipment that the Romanian army is equipped with: F-16 aircraft, Tanks Ghepard, Piranha armored personnel carriers. It seems that Traian Basescu and his entire team are suffering from a chronic form of institutional amnesia, forgetting about the incidents of 2008 and the characteristics of equipping the Russian army.

In this context, it becomes clear why Bucharest took the opportunity to close the airspace for the aircraft of Deputy Prime Minister Dmitry Rogozin. Such a gesture is fully consistent with the "logic" of vassals of Americans, who flaunt their defiant behavior. Every Romanian politician, including small officials from the Romanian Ministry of Foreign Affairs and even the president himself, sees his duty in speaking out about “threats” from the Russian deputy prime minister.

Despite all attempts to bring the country into a state of prewar hysteria, ordinary citizens do not want to fight with Russia. Romanian PR people were surprised to find that no one wants to die for the sake of presidential ambitions and for the sake of preserving the neocolonial status of Romania. Anti-war messages have become popular in social networks, and the author of one of them absolutely clearly explained why Romanians are not susceptible to military propaganda: “But now why fight? For the right to suffer and be a slave of a bank? For the right to be dismissed without any real reason, although I work for a company that has a good profit? For the satisfaction of some shareholder that I do not know? Do not misunderstand me, I repeat, I am not a socialist, I am not talking about "fists", but ... seriously, for what? ".

It is obvious that people are against war. Unfortunately, no one asks Romanians.

Ctrl Enter
Noticed oshЫbku Highlight text and press. Ctrl + Enter
We are
How the US turns Russia into a white "Rwanda".The role of the “anchor” holding Bessarabia from Romania moves from the PMR to the Gagauz and the Bulgarians: regional results-2013
Military Reviewin Yandex News
Military Reviewin Google News
83 comments
Information
Dear reader, to leave comments on the publication, you must sign in.