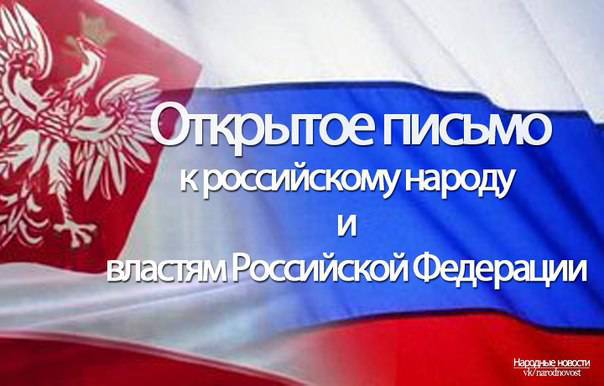 Peoples of Russia, Dear Brothers Russians! Thousands of Poles loyal to Independent Poland and the sovereign Polish people, both organized and unrelated people, are outraged and disagree with the actions of the current authorities and their licensing of the opposition of the parliament in Poland, who perform tasks imposed on them by their Western masters. They played an insidious role in the preparation and conduct of an armed assassination attempt on the democratically elected power of the fraternal peoples of Ukraine.

The adventurous policy of the anti-Polish political class and their enormous participation on the Maidan, assistance in training and arming the fascist Bandera who, in order to seize the armed forces in Ukraine, even decided to kill the civilian demonstrators of the "peacefully-minded" and Berkut employees.

The entire imperialist West, led by the American administration, the Kiev junta and political puppets from Poland, has Ukrainian blood in their hands.

It was an imitation and continuation of the Bandera gangs that committed the genocide of Slavs - Poles, Russians, Belarusians, Ukrainians and Jews during the second MV, today in a new form, developed and deployed in the 1992 year, which is called the Wolfowitz Doctrine.

This clearly shows how dependent these puppet politicians are and how helpful they are to their masters, who are striving for destabilization in our region.

This fits into the plans of the so-called West with the aim of seizing power over the whole world by a handful of people pulling the strings and not receiving any resistance when committing assassinations, murders, inciting revolutions, wars, bringing to the genocide and ethnic cleansing in the name of building “democracy”.

The enslavement of the peoples of the world and the subordination of the new countries to themselves through the overthrow of governments, bribes, murders, color revolutions, mediated wars, etc. leads to global destabilization and World War III.

A large number of Polish non-governmental organizations and thousands of ordinary Poles, deprived of their voice and access to the media, are against these hostile actions for humanity and are in solidarity with the authorities of the Russian Federation in their actions, both in relation to Ukraine and in Syria, and in many others situations.

We appreciate that, the special positive role of Mr. President Vladimir Putin. Concerned about the political, economic and financial situation in the world and, in particular, in Ukraine, we appeal to the authorities of the Russian Federation about stubbornness towards the authorities and public organizations of Western countries - including Polish, who represent the dictates of American neoconservatives and heirs of the criminal organization UPA, the purpose of which is to include in its sphere of influence of Ukraine, regardless of the costs and losses of Ukraine itself.

The plan for the inclusion of Ukraine in the EU and then in NATO has as its goal the encirclement of Russia from all sides. The conscious part of the Polish people, not succumbing to lies and political and media manipulation, sees in these actions a further danger for all Slavs!

We, the Poles do not agree with the American version of Polish policy towards Russia and its government, as well as towards Ukraine, Belarus, Moldova, Georgia.

This policy is not in the interests of the Polish people, it pushes us towards a world military conflict on our territory.

The Poles want peace with Russia, of course in the interests of national dignity and national interests.

Poland and the peoples of the former Yugoslavia are an obvious example of the destruction of the Slavs.

The consequences of the so-called economic transformation for Poland are tragic. Poland's national debt is about $ 1 trillion (one trillion dollars), despite the sale of the best national assets, unemployment officially reaches 14%, and unofficially unemployment among Poles is about 30%, forcing young Poles to emigrate, breaking up families.

Such actions by all governments in Poland led to a demographic collapse and to thousands of suicides, especially among the young.

The situation in Ukraine with a complete twist of facts and falsification of information about the real sponsors of the Ukrainian coup does not seem otherwise.

The leaders in this falsified flow are Polish-language media, whose owners, managers and controllers are Western concerns. This is nothing but the establishment of a propaganda network hostile to Poland in Poland. The same applies to the media, paid for by the money of the Polish taxpayer, and subordinates are completely hostile to the goals of the West.

The concreted political scene in Poland, which was probably established by foreign special services, and with them by powerful Western corporations, has been deceiving the Polish people for a quarter of a century since 1989 from the medial deceitful mouthpiece.

Recent events in Ukraine have strengthened our fears about the fate of the entire Eastern Slavs, Poland, Europe and the world.

In the event of a victory of cosmopolitan destructive forces in Ukraine, this will not be their last ominous point of the plan for the Slavs and other national groups. Earlier, the western cosmopolitan mafia attempted to seize Belarus, only due to the exceptionally strong position of the effective president Alexander Lukashenko, her despicable intentions failed.

Russia also cannot ignore the cunning plans of the West, and as can be seen from the actions of the authorities of the Russian Federation, it sees it perfectly.

This is recognized by the Poles, and they want to actively join the opposition to the forces of the West in the cause of exterminating and slaying the Slavic peoples.

In this regard, we propose: - to create a World Council of Slavs, as a platform for contact and mutual understanding between our tribes, which would consist of representatives of all Slavic countries, selected in individual Slavic countries from among the persons involved in the activities of opposition organizations in relation to obedient aliens set puppet modes. - to establish the location of the World Council of Slavs in one of the capitals of the Slavic countries. - The main task of the BCC, together with its rear in their own countries, would be to develop and disseminate joint defensive actions in the face of the destruction of our Christian, Slavic community and to create opportunities for the dissemination of information for all Slavic peoples.

Our proposal is connected with the escalation of the destructive actions of the camp which is highly hostile towards the Slavs, as well as with the insufficient possibility of free actions in their home countries. Our organizations are isolated, tracked and destroyed.

We do not have the opportunity to reach out to society after the washed information on the Internet.

We are against all revolutions, wars that destroy nations, families and individuals and therefore will also reach out to the consciousness of wide Slavic communities (and not only Slavic), we want and can change the future fate of our peoples.

We are confident that joint opposition to evil will have a sufficiently large response throughout the world, that the puppet authorities of the so-called West will not be able to stifle our joint international position and international actions of all Goodwill People of both East and West. In addition, our strength and opportunity will be supported by the Slavic population in the international arena.

We congratulate you, our Slavic brothers of the Russians (who, as the first people in the world, paid a huge price to the murderous Bolshevism, to the sponsor support of the usurious environment that is now in Ukraine), the current authorities of the Russian Federation.

We are pleased that after the many unfavorable years of the destruction of Russia, its revival has come, especially in morale and Christianity.

In connection with these changes, hope is also for us, the Poles, who are constantly agitated by the Polish-language media and 25-summer parasites of the political class, have not succumbed in general to the dictatorship of propaganda and bankers.

In the current struggle (while propaganda and political) most of the Poles are with Russia, with the Russians, with Ukrainians free from Western influences, and with all the Slavs.

Our joint actions should bring an appropriate result for the benefit of our Slavic peoples, for the benefit of all mankind, because otherwise we will share the fate of Iraq, Afghanistan, Syria, Libya, Egypt, Yugoslavia, Ukraine and many others.

Only the great Christian Russia can stop the march of ,, Satan of the West ”on our Slavic lands. Congratulations to the Russian people together with their authorities.

Ctrl Enter
Noticed oshЫbku Highlight text and press. Ctrl + Enter
We are
A great interview with Sergey Lavrov: about Ukraine, Obama and IranMonitor Polski Zbigniew Vzhodak: An open letter to the Russian people and the authorities of the Russian Federation
Military Reviewin Yandex News
Military Reviewin Google News
182 comments
Information
Dear reader, to leave comments on the publication, you must sign in.