20 May 2014
31
At the Chinese naval base "Usun", the Russian-Chinese military doctrine "Sea Interaction-2014" was launched. The ceremony was attended by Russian President Vladimir Putin and the President of the People’s Republic of China Xi Jinping. 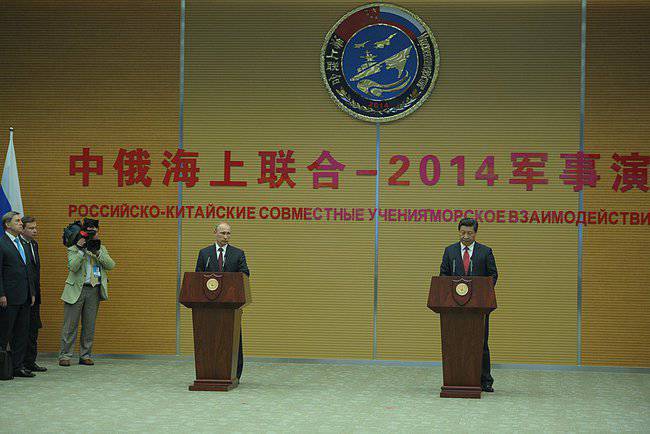 The most active phase of the exercise, with the participation of Russian and Chinese warships of various classes, will begin on May 22 and last until May 25, inclusive, and for the time being, extreme preparations are under way to begin maneuvers. The main tasks during joint large-scale exercises are: working out actions for escorting ships, releasing conditionally captured ships, countering sea terrorists (pirates), detecting, identifying and destroying various targets at sea, on land and in the air. One of the most spectacular stages of the exercise is naval artillery firing. In addition to military objectives, there are goals of a humanitarian nature. They were designated by the Deputy Commander-in-Chief of the Russian Navy, Vice Admiral Alexander Fedotenkov, who oversees the course of the exercises from the Russian side. Words Fedotenkova quotes information and analytical portal http://www.soyuz.by/:

One of the main goals of the exercises is to educate the sailors of Russia and China in the spirit of friendship, mutual understanding and cooperation.

Exercises are held in the northern part of the East China Sea (east of the Yangtze). The total number of disciplines planned to complete is nine. Chinese military experts (in particular, Zhang Jushe - a leading researcher at the Institute of Military Sciences) note that maritime exercises will lead to a truly high-quality interaction. If in the course of the first two such exercises, certain roughnesses were observed, then the new exercises should smooth out all these roughnesses and bring the interaction to the level of maximum efficiency. Chinese newspaper "People's Daily" quotes Zhang Junshe:

This is an important manifestation of the constant deepening of the practical interaction of the military forces of China and Russia, which has an impact on enhancing the capabilities of the actual defense of the Navy of the two countries.

A number of Western media have already managed to come up with articles in which discussions are conducted on the purpose of these exercises. In particular with the BBC declares that Russia and China are experiencing increasing “international pressure” (Russia - over Ukraine, China - on the fact of actions in the South China Sea), and therefore “forcedly” deepen ties.