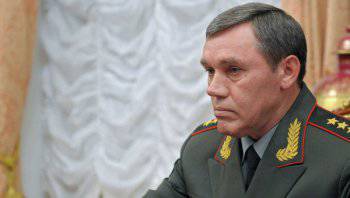 According to RIA "News", with reference to the press service of the Russian Defense Ministry, the Chief of the General Staff of the Russian Armed Forces, Valery Gerasimov, had a telephone conversation with the Chairman of the NATO Military Committee Knud Bartels, in which he expressed concern about the increased activity of the Alliance troops near the Russian borders.


According to the representatives of the alliance, because of the situation in Ukraine, NATO had to take a number of measures to ensure the security of the allies, including increased patrols of the airspace of the Baltic countries, regular flights of aircraft with radar equipment over the territory of Romania and Poland, the introduction of additional ships in the Baltic and Mediterranean seas. In addition, the alliance increased the constant presence of personnel, expanded the training program, and also strengthened the early warning system of threats and strengthened the capabilities of the response forces.

“Army General V.V. Gerasimov expressed concern about the significant increase in NATO military activity near the Russian borders, which is not conducive to improving security in Europe, ”the Defense Ministry’s press service reports.

Earlier, Russian Defense Minister Sergei Shoigu called the increase in the activity of the armed forces of NATO in Eastern Europe "unprecedented." According to the Permanent Representative of the Russian Federation to NATO, Alexander Grushko, the alliance is hiding behind the Ukrainian crisis in order to reanimate itself by achieving an increase in the military budget of the bloc.
According to the press service of the department, the parties "confirmed the understanding of the need for mutual steps aimed at reducing tensions and stabilizing the situation."

Ctrl Enter
Noticed oshЫbku Highlight text and press. Ctrl + Enter
We are
Independently to confront the challenges of Bucharest Kiev is not able to
Military Reviewin Yandex News
Military Reviewin Google News
42 comments
Information
Dear reader, to leave comments on the publication, you must sign in.