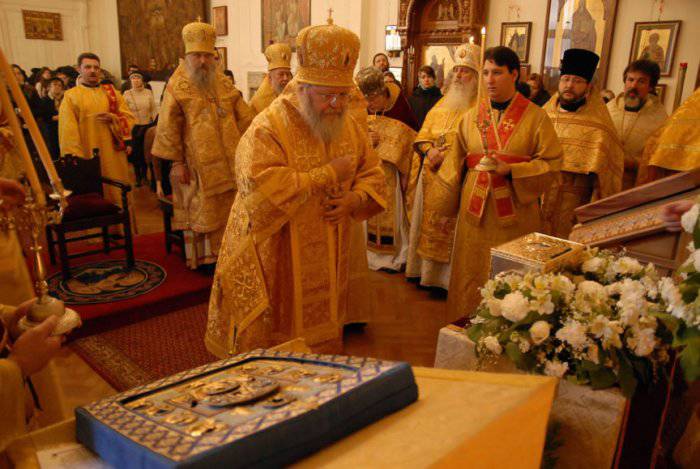 The Russian Orthodox Church criticized the way Victory Day is celebrated in Russia. Advisor to the Russian Orthodox Church said that the "eternal flame" is a pagan symbol, unrelated to the memory of the fallen soldiers. Earlier, the official church publication "Journal of the Moscow Patriarchate" wrote that the celebration of Victory Day is similar to the "civil religion", which is based on "pagan values".

Experts believe that, on the one hand, the church thus expresses dissatisfaction with how Victory Day is celebrated recently in Russia, on the other - this may be a manifestation of resentment of the church against Soviet power.

"Thank the granfather for the victory"

Sergei Chapnin, editor of the Russian Orthodox Church, wrote in his article that the celebration of victory looks like a "civil religious act." "At the heart of this civic religion are pagan values ​​and symbols, which were partially modernized by communist propaganda, and the ritual forms of this religion, in part, provide for the universal worship of fire."

A Moscow journalist, member of the Public Chamber of Russia Maxim Shevchenko, in an interview with the BBC Russian service, said that the celebration of Victory Day in recent years seems like a national show and has become another gullet for Russians, and this is what the church condemns. "I think that the hysteria we observe on 9 in May goes beyond common sense. People write on their cars," Thank you grandfather for the victory, "they order a dance in Moscow strip clubs, to the exclamations," Thank you grandfather for the victory, "the journalist said. In his opinion, this does not concern the people “who fought in the ruins of Stalingrad”.

At the same time, historian Alexander Dyukov notes that Russia is a secular state and does not understand why the church makes claims to secular events. He recalls that the Orthodox Church has long been "specifically" related to the Great Patriotic War. He believes that such statements are a manifestation of the resentment of the church against the Soviet power. “Certainly, these are echoes of resentment, this is an attempt to take revenge after many years for their sufferings, but the fact that the church is doing this now and in this form looks, to put it mildly, not very reasonable,” said the BBC historian.

Observers note that during the reign of Vladimir Putin in Russia at the state level, a policy of glorification of the Soviet past. Russian leaders often talk about the greatness of the USSR, of which Russia is the successor. Polls indicate the growing popularity of the figure of Joseph Stalin among Russians. At the same time, in Russia in recent years, the number of believers of the Orthodox Church has also significantly increased. Observers believe that the influence of the Russian Orthodox Church was especially strengthened after it was headed by Patriarch Kirill. He is considered one of the most influential figures in Russian politics. The church usually fully supports the Russian leadership.
Ctrl Enter
Noticed oshЫbku Highlight text and press. Ctrl + Enter
Military Reviewin Yandex News
Military Reviewin Yandex Zen
15 comments
Ad