Riot high: drugs on the Maidan is no longer denied, and the Ukrainian side 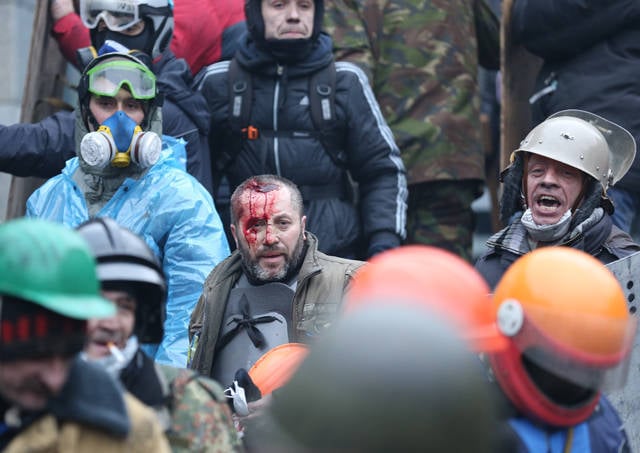 The head of the Federal Drug Control Service 16 May made a statement that the participants of the Kiev Maidan were exposed to drugs and were in a "completely abnormal, psychoactive state."

Viktor Ivanov said: the information that a lot of the participants of the Maidan were "high", not only the Russian service, but also the Ukrainian colleagues.

“I don’t have information that drugs were transported from the United States, but there is information that a huge number of drug users were among the participants in the Maidan, that is, people who were in a completely abnormal psychoactive state,” RIA was quoted as saying. News the words of Ivanov.

Earlier on the Internet and in a number of media, information appeared that on Maidan in Kiev during the revolutionary events at the end of 2013, the beginning of 2014, allegedly military sacks were brought in bags by the US Army. True, Ivanov told reporters: he has no evidence that the drugs came from the United States.

In early March, one of the Russian activists who took part in the events on the Maidan in Kiev, said: "The people there are very angry, under alcohol, drugs."

Also recently, during the hostilities in the Donetsk region, the militiamen of Slavyansk declared that they apparently were given some kind of narcotic drugs to their opponents. According to the fighters of the self-defense forces, the Ukrainian military is over-excited. From the roadblocks, the militiamen noticed several times how they were covered by inexplicable aggression and unrestrained merriment.

“People are overexcited, he himself has seen several attacks of inexplicable aggression and unrestrained merriment. These are either pills or something else added to food,” said one of the militiamen.

The fact that it is not safe to drink and eat on the Maidan was warned earlier by Ukrainian bloggers. So, in early February, one of the Kharkov Internet resources published a story about how the author’s friends (a young couple) went to Kiev to take part in revolutionary events and at the same time “earn some money”.

"We stayed there a little more than a week, brought a little more for two than 10 000 UAH (less than 30 thousand rubles). We called up often, my friends constantly told about what an extraordinary atmosphere is there, what good and purposeful people, about the common euphoria, soaring right in the air, "- writes a blogger.

Then, according to him, the girl had a headache, nausea, increased blood pressure, rheumatic pains. A little later, it became bad and her friend. When they went to the hospital, the doctor said that "they have a banal break-up from previously used synthetic drugs." Similar testimonies - citizens of Ukraine - appeared in those days and in other social networks.

The portal "Antimaydan" still 17 March led statistics, which ignored the Ukrainian media. The author of the article notes: if appeals to doctors of February 20 are clear (on this day, events occurred that are still not very successfully investigated by the Ukrainian authorities), then what about the rest of the “sick”?

February 20
The 132 of the person turned to the emergency medical team for medical assistance, 82 of them were hospitalized, other assistance is provided directly on the spot.

February 21
Over the past 24 hours, 26 people have turned to the emergency medical team for medical assistance, 21 of them have been hospitalized.

February 22
Over the past 24 hours, a person’s 42 has applied for medical assistance to the emergency medical team, 33 of them have been hospitalized.

February 24
Over the past 24 hours, 49 people have turned to emergency medical care teams for medical assistance, 42 of them have been hospitalized. (And so on by the day ...)

The author of the article on the portal "Antimaydana" recalls that February 24 appeared on the Web appeal of doctors who worked on the Maidan during the February events. They asked the leaders of the "revolutionaries" to urgently help the maydanovtsy, "who fall into a state of psychosis, lose memory, etc." "Otherwise we will lose them," the doctors warned.

It is known that shortly thereafter, on February 27, an emergency meeting was held at the Ministry of Health of Ukraine, which was mainly attended by psychiatry specialists and narcologists. However, as the author of the article notes, the current Kiev authorities cannot recognize that “drug addicts brought freedom to Ukraine from the gangster regime”.

Ctrl Enter
Noticed oshЫbku Highlight text and press. Ctrl + Enter
We are
A great interview with Sergey Lavrov: about Ukraine, Obama and IranWhat you didn't want to know about England
Military Reviewin Yandex News
Military Reviewin Google News
59 comments
Information
Dear reader, to leave comments on the publication, you must sign in.