West is ready to go to the division of Ukraine 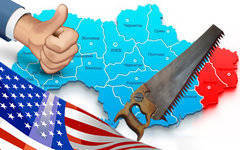 
Back in April, looking through the Ukrainian press, I drew attention to an interesting article by political scientist Yuriy Romanenko “Ukraine and non-Ukraine: where is the border?”.

It is interesting because it voiced a very seditious, especially for the country of the victorious “Maidan”, the idea: no need to drag “ballast” into a bright future. “Ballast”, according to the author, is the South-East, which not only does not share the values ​​of “Maidan”, but does not consider itself to be a part of Ukraine either politically or humanitarianly. Well, or at least the Donbass, in which even then there was restlessness and a premonition of civil war soared in the air.

Despite the seriousness of the situation, official Kiev continues to strangle a protest, not even wanting to hear about the idea of ​​federalization, which, according to most sane analysts, is the only way to preserve the unity of the country. Rather, it was. After hundreds of corpses in Odessa, Slavyansk, Mariupol, there is no longer any talk of federalization, and the past referendum showed this clearly.

The Kiev junta does literally everything to create a wall of hatred between the East and the West of the country. Hiding behind the talk about the need to preserve the unity of the country, it step by step aggravates the split and brings closer the legal consolidation of the collapse of the Ukrainian statehood.

Naturally, against this background, any talk about the fact that the “separatist regions” is the same notorious case without a handle is declared by the enemy propaganda. Thus, the Georgian politician, who declared the need to recognize Abkhazia and South Ossetia, or an Azerbaijani who allowed even the hypothetical possibility of abandoning Nagorno-Karabakh, runs the risk of becoming not only marginal, but a political corpse.

On the contrary, in the same Moldova among the supporters of European integration, the idea of ​​abandoning Transdniestria as a real obstacle to Europe is becoming increasingly popular. It took them 20 years to realize that Transnistria is the anchor that binds them to Russia.

In Ukraine, where events have recently been developing more than swiftly, this has begun to reach faster for some. Federalization has ceased to be a topic of marginal political discourse. If a month ago, only Tsarev, who, by the way, was wanted to bring to justice, spoke seriously about her, now they are talking about her at the highest level. True, somehow blurry, slurred. It is as if they do not notice again that the time to settle for federalization is hopelessly missed, and even Tsarev has long since changed the rhetoric to a more radical one.

Kiev missed the opportunity to offer a federal treaty to the South-East on its own terms. Now the only one who can bring representatives of the warring parties to the negotiating table is Putin, and the conditions for such federalization will no longer be dictated by Kiev. And then if the representatives of the DPR and the LPR agree, and they have already demonstrated to the whole world that they do not depend on the Kremlin in making decisions about their future.

So Yatsenyuk, Turchinov and Co. can stutter as many times as they are willing to make concessions. Against the background of ongoing punitive operations, it looks just mocking. Moreover, everyone understands that this is an empty talking room: those who brought them to power are not ready to make concessions, they want and will fight for the “one and indivisible” to the end.

Nevertheless, a clear understanding comes to Kiev very late that a national project that was born on the Maidan can be preserved only in one way - to get rid of regions that do not share its values. Otherwise - the war, which is still unknown what will end and whether it will end in the coming years.

Understanding that any national project can be built only on the basis of public consensus, and not suppressing those who disagree, which are too many to be easily suppressed, and which, together, can bury this project. Understanding that building anything from incompatible materials is not only useless, but also dangerous.

And on May 11 I read in “Ukrainska Pravda” a material called “Ukraine and its Vendee: what’s next?”. The author of the article admits that the attack on the Donbass was confronted with fierce resistance from local residents, who, although "stupefied by Russian propaganda," but still local residents, armed and ready to kill Ukrainian security forces.

According to him, “the Ukrainian anti-terrorist operation could only stop the spread of gangrene, but in no case could it destroy its source.” According to his idea, Ukraine should abandon the useless shedding of blood for the Donbass, leaving it and creating unbearable conditions for it to exist. This implies both “revenge for treason” to oligarchs, the seizure of all their assets outside the region, their inclusion in all sorts of “black lists”, and sanctions against ordinary citizens, like in Crimea: the impossibility of going abroad and the like. The advantages of the department, for example, are that Ukraine will no longer be “forced to pay pensions to peaceful grandmothers, because of whose back they will kill the siloviki”.

Further, the author proposes “to evacuate from Donbass everyone for whom life in the DPR and LNV is initially impossible, and, stating the actual seizure of this part of the de jure sovereign Ukrainian territory by pro-Russian criminals, isolate themselves from the gray criminal zone with something ideally similar to a wall on the border Israel and Palestine. "

Here you have another one that reaches intelligent thought. Only having arrived a little later, when so much firewood has already been broken, that we will have to forget about Odessa and Kharkov, which the author calls to protect from the spread of "gangrene of separatism". "Gangrene" has reached a size incompatible with the life of the state. So where does all this late epiphany come from?

Another 8 of May in Financial Times published an article “It is better to divide Ukraine than to tear it apart” (“It would be better to split it apart”), in which Eugene Rumer, director of the Russian-Eurasian program of the Carnegie Foundation, states: The scenario of dividing a country is an extreme option, but it is better than a civil war that has already become a reality.

The Carnegie Foundation, if someone does not know, is one of the world's leading expert-analytical centers. Apparently, the West is beginning to understand that in its desire to tear off all of Ukraine from Russia, it can lose, and that it is better to save at least a part of Ukraine, giving up the rest of Russia than losing everything.

Another issue is that in the United States there is no consensus on this. Some continue to focus on creating a situation of constant chaos in Ukraine and drawing Russia into an armed confrontation. And others, apparently, began to realize that these efforts could have the opposite effect: Russia can stop the war, forcing Kiev, Donetsk and Lugansk to sign a federal treaty on its own terms. And then the whole geopolitical game of the West is lost: it will be possible to forget about the possibility of deploying NATO military bases on the territory of Ukraine. And the association with the EU will have to be forgotten, as well as, incidentally, the movement of the East towards the CU: for Moscow, which has long accepted the fact that Ukraine will not be in the CU, its non-neutrality and neutrality guaranteed by the creation of a federation of equal rights will win. subjects of the West and the Center from the South-East.

Therefore, the idea of ​​divorce by mutual consent will now be actively thrown into the minds of Ukrainian elites. The West does not like to lose, and does not know how. And the danger of his defeat in the largest geopolitical confrontation since the end of the Cold War is now very great.

And, of course, such a civilized divorce is the best solution for Kiev. They now need to stay in power, but the war does not contribute much to this. Putting on the map all the “conquests of Maidan” to preserve the unity of the country, which will no longer exist (and many understand this), is a risky and adventurous step, but in the spirit of Maidan. And the last word will be, apparently, for him.

Whether the junta will succeed in convincing those on whose bayonets she came to power of having to leave the Donbass in order to save the rest is a good question. Moreover, the junta is still not able to voice this thought, and it’s not a fact that it will ever be decided at all.

Ctrl Enter
Noticed oshЫbku Highlight text and press. Ctrl + Enter
We are
How can Russia survive and win in the 21st century?Russia: the Moon, Mars and further everywhere ... Speeches of the participants of the Izborsky club in the corporation "Rosobschemash"
Military Reviewin Yandex News
Military Reviewin Google News
100 comments
Information
Dear reader, to leave comments on the publication, you must sign in.