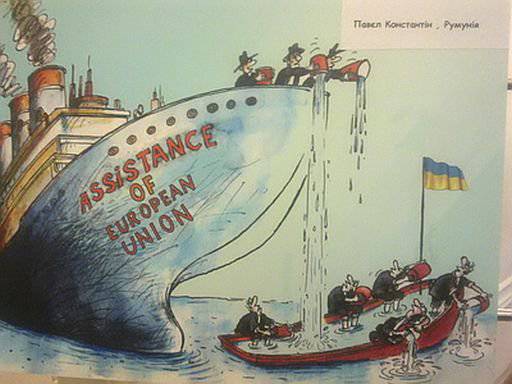 Events in Ukraine should be viewed from a different political point of view, because historically, Ukraine’s territory was seen by Europe exclusively as a donor in difficult economic situations, such as the one that has emerged today due to the global crisis.
And that's why. There is the largest fund Franklin Templeton, whose managed assets are $ 844.7 billion. The company owes this package to Mark Möbius, a literate Monsanto Overseas Enterprises Company, who bought assets from developing countries in 1992, acquiring, in particular, shares in Amtel, AvtoVAZ, Sberbank, Volgatelecom, Nutritek and Lukoil, where Möbius served on the board of directors.

Today, it would seem that investments in distressed assets are not at all a fund profile, but nevertheless, immediately before the Ukrainian events, the Möbius Foundation acquired Ukraine's eurobonds in the amount of about $ 6,4 billion. This allowed Franklin Templeton to become the country's largest creditor. Despite the fact that, according to the official version, Franklin Templeton suffers losses due to investments in Ukrainian government bonds, the outcome may return the status of an investment prophet to the fund after receiving a number of Ukrainian state assets.

To restore logic and historical sequence of events, it must be remembered that in Europe the idea of ​​an independent Ukraine appeared a hundred years ago, when blocked by English fleet Germany was suffocating from a lack of resources, in particular food for the population. Winter 1916-17 the Germans called rutabaga, because coupons for all basic food products: milk, butter, fats, bread and others were replaced by rutabaga. In 1919, Major General Hoffmann, commander of German forces on the Eastern Front, in an interview with the Daily Mail newspaper, quite frankly admitted that he "created Ukraine in order to be able to make peace with at least part of Russia."

In February, 1918 of the year with the Ukrainian Central Rada signed an agreement under which Germany received Ukraine with undefined borders in the east. HE. Anderson in the book “Foreign Trade of Ukraine in 1918” described the fate of an “independent” country as follows: “Capturing the Ukrainian market ... while eliminating any possibility of competition from other states and ensuring the possibility of the same unlimited pumping out of any raw material”. In Germany, 600 000 brands are invested in a syndicate engaged in the supply of Ukrainian products. The chief of staff at Hindenburg, Ludendorff, believed that "in Ukraine it was necessary to suppress Bolshevism and create conditions there for extracting military benefits and exporting grain and raw materials." We managed to take out 56 000 horses and 5000 cattle heads. As befits a “independent” post-revolutionary Ukraine, they billed a large bill for military aid against the Bolsheviks and the maintenance of troops on its territory, which predetermined the conclusion of a financial agreement allowing to manage the Ukrainian currency, but the time of the Second Reich itself had already come to an end.

The economy of the next Reich, the Third, was directly dependent on the supply of metal, the general assistant in the Imperial Ministry of Economics (Reichswirtschaftsministerium) brigadeführer SS Hans Curl wrote: “In the planning for the use of raw materials, the“ leading raw material ”was iron. All other types of raw materials ... were planned depending on the amount of iron. " Before the Revolution, the enterprises of Donbass belonged to French capital, who preferred to coal mines and industrial enterprises, producing 78,8% of all pig iron smelting in southern Russia. In the hands of the French-Belgian syndicate "Prodmet" was concentrated 80% of the entire metallurgical industry.

Now they were noticed in the leadership of the Third Reich: “My generals do not know anything about the economic aspects of the war,” Hitler remarked, giving a directive to Brauchitsch: “The main task before the onset of winter is not the capture of Moscow, but the seizure of Crimea, industrial and coal areas Donets ... ". Hitler was defined form of ownership of enterprises: "The Führer ... again recalls that he does not want any monopolistic organizations in the East, that private initiative should be included", "privatization" as a procedure was invented in the Third Reich. 25 June 1941, Reichard, head of the foreign department of Otto Wolff concern, wrote: “The most important area is Ukraine with its iron ore mining in 22 mn t, manganese ore in 1,8 mn t, steel production in 12 mn t and 35 large blast furnaces and rolling mills ".

According to the cited document, the production of iron and steel was to be controlled by three administrative districts, where Kiev was assigned a representative of the steel concern Hoesch Werke AG Moscow and Leningrad were distributed between Hermann Göring Werke and Krupp AG, whose head Alfred Krupp visited Ukraine: “After the inspection visit with Mr. Plager to some factories ... in June 1942, I invited my employees to take custody of the following companies: a machine-building plant in Kramatorsk, metallurgical plants in Azo ve and metallurgical plants in Mariupol ". Dr. Friedrich Jansen, a member of the board of directors, after the 19 meeting on August 1941, stated: “We are primarily interested in the Dnepropetrovsk plant,” on October 8 and 1942, the Ministry of Eastern Affairs secured Krupp Industrie und Stahlbau’s custody over the Dnepropetrovsk plant.

In the spring of 1942, the Issuing Bank for Eastern Lands appeared at the Ostland Reich Commissariat and the Central Issuing Bank of Ukraine in Rovno, which was manufactured by Carbovanez (Karbowanez), whose rate was almost five times higher than that of the 1 brand: 10. This is one of the elements of the so-called “Ost” plan, whose composer Konrad Meier-Hetling pointed out: “... money emission can be used as a suitable means of financing (cf. the example of the Central Issuing Bank of Ukraine - (highlighted by Meyer-Hetling), if necessary economic reserves (in the form of land, labor, raw materials, etc.) are available and can be used productively through the use of credit. ”The background of the mechanism is described in the work of B. Senilov Yuny ":" The fact is that the higher the rate of military currency in relation to local money is set, the greater the impact will be the issue of military signs on the increase in the money supply in an occupied ... country, and consequently, on the scale of benefits. ”

All these mechanisms were implemented in 90-s up to the provisions of the “Memorandum on the objectives of aggression, methods of establishing domination in the occupied territories” of April 2 1941: “Ukraine (literally, the“ Regional Region ”) ... Our political line regarding this area would be to encourage striving for national independence, up to the potential creation of one’s own statehood — either in Ukraine as such, or in association with the Don Oblast and the Caucasus. This union would constitute the Black Sea Union, which would have to constantly threaten Moscow and cover the Great German living space from the east. Economically, this area would simultaneously constitute a powerful raw material and food base of the Great German Empire. ”

Having plundered the monasteries and museums of Kiev, the Nazis brought 330 000 art culture exhibits. In a letter addressed to the imperial minister Rosenberg from 14 September 1944, “About works of art exported from Ukraine” it was said that 85 boxes and 57 folders with values ​​and works of art were sent to East Prussia from Kiev and Kharkov. Governor General Hans Frank in August 1942 of the year boasted in Lviv: “The most beautiful thing about this war is that we don’t give anything away from what we once took,” but I had to return. And now the modern Gauleiter Yatsenyuk, under the guarantees of a loan from the IMF, brought to the USA a gold reserve of Ukraine and a whole range of museum valuables, including Scythian gold. (http://newspmr.com/novosti-ukrainy/11213).

Now a logical continuation in Ukraine will be the new privatization, the redistribution of the gas transmission system and control over industrial enterprises. Statistics of Ukrstat (http://rt-russian.livejournal.com/3914702.html) showed that the fall in total output was mainly due to metallurgy (–11,5%) and mechanical engineering (–17,4%). The fall in the turnover of companies will underestimate their value. And by buying just such assets, the Templeton Emerging Markets Fund made its fortune, starting with total assets of $ 100 million. It is likely that now the state’s creditor has a preferential right to acquire property, the value of which has fallen due to civil conflict. The transfer of ownership will be another round of the hundred-year battle for resources and enterprises of Ukraine

Ctrl Enter
Noticed oshЫbku Highlight text and press. Ctrl + Enter
We are
New plants and workshops in Russia in 2014 yearList of destroyed the largest and most high-tech enterprises
Military Reviewin Yandex News
Military Reviewin Google News
33 comments
Information
Dear reader, to leave comments on the publication, you must sign in.