There is a colossus, staggering 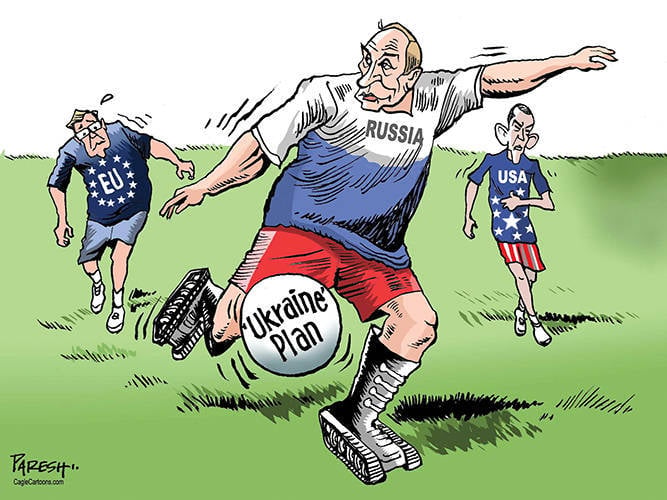 The fish begins to rot from the head. And judging by what is happening in Europe and the United States, the smell there goes not the most fragrant. As already known, the operation, developed by Western "partners", did not follow the written script. Instead of turning Ukraine into 180 degrees against Russia, the writers have not only destroyed the country, but also their camp. Last week, Mrs. Nuland at a meeting of the Senate was publicly flogged by the same McCain, for the fact that the sanctions against Russia are not only not going to harm, they go to Russia in favor. Nuland argues that the Russian ruble is falling, but, as John found out, the course is not only not falling, it is growing and strengthening. The Russian market goes up. He also said that he was very disappointed with Vika’s work and now regrets that he once voted for her candidacy. At the same time, Nuland looked not just depressed, she had the appearance of authority lowered on the “zone”. The only thing she could answer was that they would come up with more sanctions along with their European colleagues. (The video of this conversation was shown on the ORT 11 channel on May 2014 of the year in the program "Time").

The West is hysterical about the fact that it is not only unable to hurt Russia, he does not know how. More or less serious sanctions will hit the US and Europe more than Russia. The only thing that Europe could do was not at the Eurovision Song Contest to vote for Russian girls in general, but in spite of us we would choose an unshaven sex unshaven and hairy hermaphrodite as the winner. I think that this is the worst sanction that Europe is capable of, and, as it turned out, some EU countries basically voted as they like, and not as the majority ordered. The same Greece put the bolt on all the new European "values" and voted as she wanted.

When the concepts and values ​​of democracy and free thinking rest only on the freedom of sexual expression, I personally draw an analogy with the Roman Empire, which has successfully collapsed due to these "values". One of the reasons for the collapse of the empire was concluded precisely in the fact that Rome more and more plunged into the abyss of moral decay, when lust, debauchery were raised to a superlative degree and began to be considered achievements that surpassed military exploits (saying taken from the site World of history). Look realistically at what is happening now, the traditional concepts that the church has chanted at all times, like a family consisting of a man and a woman, go away. Instead, the church itself allows same-sex marriages, the government approved the adoption of children, and their parents are now called not mom and dad, as it was at all times, I ask you to notice at all times that there is a reasonable person who can speak, and the parent 1 and the parent 2. Who gave these upstarts the right to undermine the foundations of human nature and the human universe? But on the other hand, thanks to this, we have a well-fed, I would say, snickering part of Europe, based on Germany, France, Belgium and the United Kingdom, which themselves do not understand where they are headed. And there are donor countries, so let's say - carriages, which are pulled in the EU by the ears because new markets of unconditional sales are needed. This is more than already ate Greece, Bulgaria, Romania. As mentioned above - all this reminds the Roman Empire before its collapse, namely the empire itself and the subordinate (captured) lands. Although it would be useful to note that Italy, which is part of the EU, does not play such games, does not climb into a fight, but takes a quite normal wait-and-see position, has stocked up on pizza, pasta, and calmly waits for the end of this orgy, called “We are completely out of our own greatness and impunity. " Although in Europe is not so simple. Industrialists beat a sickly alarm and say that the real economic sanctions against Russia will hurt the European Union the most.

While the United States and Europe are thinking about new sanctions and how, in spite of a mother to freeze her ears, there is a serious quarrel between industrialists and politicians. When in the United States, V. Nuland is furious with impotence and receives toothbags from his Russophobic colleagues for what he cannot do a damn about Russia, the senators themselves do not approve of the policy being pursued. At the same meeting, the question of the participation of nationalists in the Maidan coup was raised very sharply, to which Nuland was not able to answer unequivocally. This suggests that far from all support the policy towards Russia, and more and more often sober voices of US senators are heard that drawing the US into a conflict that does not bode well for anything good, including political dividends, is a waste budget money and time.

At the moment (at the level of rumors, of course) it is known that the Russian Ministry of Finance is considering the issue of switching to a multicurrency system of payment for energy resources. Those. countries consuming Russian energy can pay for gas, oil and electricity purchased from us in national currencies such as the euro, yuan and Russian rubles. From my point of view, this is a very soft and polite blow between the legs of the United States. Russia does not prohibit the sale of energy for US dollars, but permits to sell for other currencies. What will the zealous master do? He will count. To pay in dollars, you need to purchase them, pay for services to currency traders and brokers. In the volumes that you need to buy, this is quite a fat commission. Easier to pay in your own currency. And since the lion's share of energy resources is sold in Europe, it is simply cost-effective for them to pay in euros.

By the way, for our part, as ordinary citizens, we can introduce our own sanctions. In common people this is called a ruble vote. Everything is very simple: you need to minimize (completely refuse to turn out, let's proceed from the reality) the purchase of European and American goods. Personally, I quite long ago refused such brands for my family as: McDonalds, Coca and Pepsi (and other drinks of these concerns), Mars and Snickers, Roshen, candies, I don’t use Google search engine, I don’t use Apple products in principle, I stopped buying Hollywood movies on drives dvd and blu-ray, I drive a Japanese car (I am for sanctions, but I consider the Russian car industry a sanction against humanity), I smoke cigarettes produced not by BAT concern. You can continue the list yourself, in the comments below.

I understand perfectly well that there are more unregistered readers here than those who respond. But if we begin to vote for the ruble ourselves, the market will certainly react to it and will react in the same way - with the ruble. Goods that are not in demand among the population will not be sold. I repeat, it is impossible to completely exclude the goods of the EU and the USA from life, but some of them can be abandoned, some can be found a worthy replacement. And if everyone makes at least a small step in this direction, then the money that ultimately comes to support the orgy that is happening in Ukraine and in the world as a whole, even a little bit, will diminish. This can be our small contribution to the loosening of the colossus on clay feet.

Ctrl Enter
Noticed oshЫbku Highlight text and press. Ctrl + Enter
We are
A great interview with Sergey Lavrov: about Ukraine, Obama and IranWhat you didn't want to know about England
Military Reviewin Yandex News
Military Reviewin Google News
165 comments
Information
Dear reader, to leave comments on the publication, you must sign in.