Does Der Spiegel travel across Russia, or what kind of press does Russian Railways offer passengers?

12 May 2014
80
Many of our readers are aware of the existence in the former Soviet Union of joint projects of local and foreign news media. The essence of such activity is that one or another Western mass media, through the representations created in Russia, Ukraine and other countries of the post-Soviet space, conveyed their vision of the geopolitical or economic situation to an extended circle of readers. Such ways of expanding the reader’s (audience, user) audience are resorted to, for example, Radio Liberty, the German weekly Der Spiegel, and other Western media.


The focus of these publications is also known, as is their main information and political message. The promise is to form, through its foreign representative offices in a particular state, a public opinion that would fully meet the interests of the people behind large foreign resources, the interests of powerful political and economic clans. However, in connection with the latest events related to the state of affairs in Ukraine and around Ukraine, many Western information and analytical resources (from newspapers and radio stations to television channels and major Internet resources) began to lose their target audience, so to speak. viewers, listeners who would unconditionally support exclusively Western and pro-Western point of view on the Ukrainian conflict, and indeed on most of the processes occurring in the world.

Significant loss of audience media from Europe and North America, broadcasting in both foreign languages ​​and in Russian, found (by their own estimates) in the vast expanses of the Russian Federation. And this loss of a considerable percentage of the “target” audience in connection with known events clearly prevents Western stakeholders from effectively solving the tasks of cultivating the “special” opinion among the inhabitants of Russia.
It is urgent to get out of the crisis that has taken shape! - decided the Western media, stubbornly wishing to process the reader contingent of the Russian Federation. After all, when an increasing number of Russians are convinced that many foreign media have turned into a mouthpiece of disinformation, outright lies or pushing through purely anti-Russian positions, then it is necessary to resort to extraordinary measures. What was the solution found? We will understand in more detail.

May 2014 of the year. One of the firm trains of Russian Railways, departing from Moscow. The so-called soft car. The ticket price includes services not only of moving and bed linen itself, but also press services. And if everything is understandable a priori with the move and bed linen, then the press has caused considerable surprise when meeting with her during the journey. A courteous conductor delivered Profile magazine in a compartment, on the cover of which was the famous portrait of Mr. Makarevich with a ribbon in the colors of the Ukrainian flag on his coat. In addition to Makarevich's position, the cover of the magazine reported that Profile was a business weekly published jointly with Der Spiegel mentioned above. 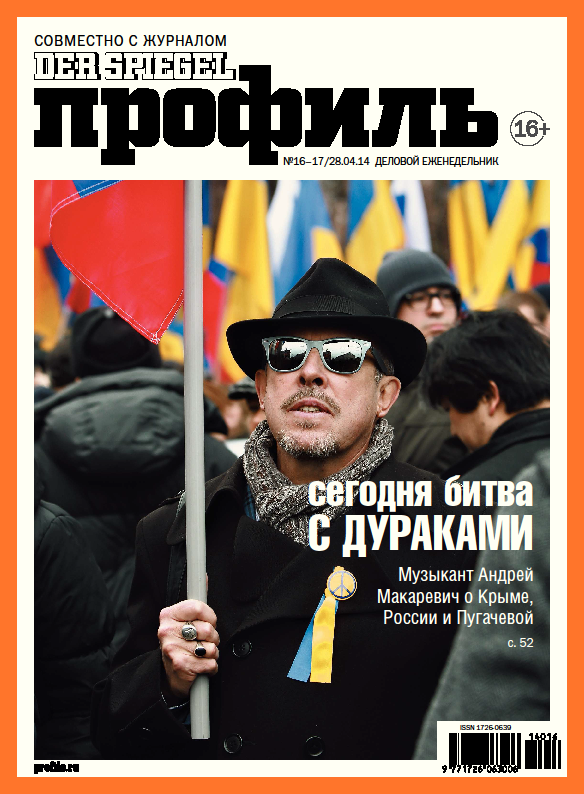 To ignore the proposed press did not work - the road is far away, endlessly staring out the window, even despite the amazing May landscapes, you will not be either. And interest in the magazine was fueled by the fact that it was just interesting to find out what press content for its passengers the management of Russian Railways decided to focus on. Well, in fact, it was not on a personal initiative that the conductor decided to distribute a magazine among the clients of the carrier company, which she personally appeals to ...

So - about the content. Retelling it completely - it makes no sense, especially since anyone can find the edition distributed through Russian Railways (Profil magazine under 16-17 from 28.04.14) on the Internet; on the other hand, it makes sense to offer our readers interesting excerpts from the articles of the very issue that “thoughtfully” offered to passengers on the Moscow-owned train of the Russian Railways.

Dirk Kurbyuvayt, article "The Power of the Powerless" with a photo of Vitaly Churkin sitting alone 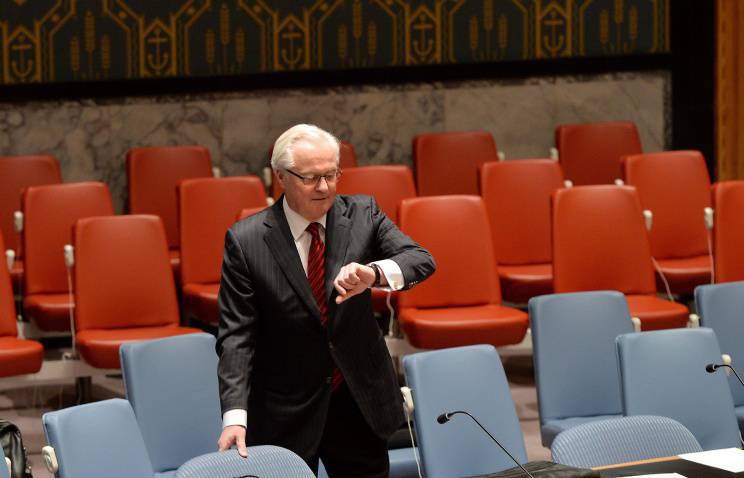 A few quotes from the article:

In the conditions of the Ukrainian crisis, the West behaves softly and compliantly.

The world will not rest after Vladimir Putin annexed Crimea to his empire.

... today, authoritarian regimes have an advantage. One of the reasons for this is determination. Putin achieved his goal in the Crimea, because he acted without hesitation. The Russian ruler does not need to go to the authorities to send his troops somewhere. An authoritarian ruler can argue his actions by popular support, which makes an impression on the West. Such regimes do not know the problems with morality. For them, legitimacy is of secondary importance, since their own legitimation is questionable. They have no mission that they would have to carry. When somewhere war breaks out or human rights are violated, they should not be bothered. What does someone's suffering mean to them if they make their own peoples suffer? This allows them to pursue a policy that seems monolithic.

Putin's empire, the softness of the West, the dubious legitimacy of the Russian authorities. Strong, isn't it ...

This looks especially strong due to the fact that the passenger of this article by Mr. Kurbjuvayta along with other articles of the Profil magazine, excuse me, vtyuhali without particular consideration for the interests of the passenger - not only that, but also for the passenger’s money. Of course, “Der Spiegel” has obvious problems with the distribution of such authorial positions in Russia through subscription, and the very thing through Russian Railways ... They say they will read the majority anyway, or at least run over their eyes, forming their point of view - preferably consonant with the point view of the owners of "Spiegel". And if we take into account how many Russians move annually in Russian Railways cars that offer the “right” press from someone’s point of view, it becomes clear that the effect is expected to be substantial. Stunning marketing, stunning management, stunning position of Russian Railways, which, let's not forget, is a state-owned company with an annual turnover of almost a trillion rubles 1,5 ...

Vladimir Rudakov, the article "Putin is pursuing a policy in accordance with the expectations of the majority."

A few quotes from the article:

Putin in the first two terms gave serious importance to relations with the West. Now Russia has refused membership in the G8.

Is that so? It turns out that readers of the Spiegel “Profile” should “find out” that it was Russia that decided to leave G-8. Itself, they say, decided ... But in this GE-8 we were incredibly happy, they listened to our interests and fell on our knees, so that Moscow would remain in this “friendly family” ...

In connection with the crisis in Ukraine, the society is filled with fears of the “iron curtain” and possible reprisals against dissidents.

Apparently, this is some kind of too narrow society, which today is so firmly occupied by the theme of some kind of repression against dissidents. What kind of repressions are there when these same dissidents get access to spreading their opinions even through the Russian state company - the largest employer in the Russian Federation, whose transport services are used by millions of people ... To be honest, the repression of the original form, which has no analogs in world practice. You can imagine if, for example, an English or German version of the Rossiyskaya Gazeta were broadcast on the American, German or Canadian trains or airplanes or the Russia Today TV channel was broadcast ...

Dmitry Bykov. Publication of an interview with Andrei Makarevich.

Predict what will happen here in a year or even two, no one will undertake. And who in 1914 could have imagined what would happen two and a half years later? And 20 June 1941, who really believed that the day after tomorrow is war? Stalin, and that ... The world is now hanging on a very thin hair. Enough of a crazy step or a word from any side, so that everything will break loose in the last war on Earth. I am almost sure that it will not happen, but what will today's quasi-patriotic hysteria turn out for us and whether it will be possible to drive the genie into a bottle ... However, there are grounds for optimism. Many have calmed down. People are glad to welcome Crimea as part of Russia, but are not willing to pay for it, much less. The consequences are already palpable.

The consequences for the musician Andrei Makarevich from the reunification of the Crimea with Russia are palpable, says Spiegel to passengers of Russian trains ... If passengers are dumbfounded by Makarevich’s opinion about the annexation of Crimea and some terrible consequences, then he himself is a musician cook diver suggests a term for self-identification - adherents of quasi-patriotic hysteria - no other way ...

In general, the subject of the press, which the Russian state-owned company Russian Railways, headed by Vladimir Yakunin, offered to its customers on the May holidays, is understandable. 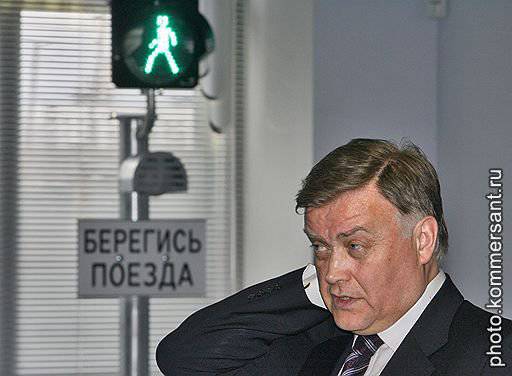 One thing is unclear: is this the official position and leadership of Russian Railways, too, or does Vladimir Ivanovich not for personal gain, but by the will of a bright cover, without familiarizing himself with the content? .. Or maybe, after all, the insidious conductors slip? ..

Ctrl Enter
Noticed oshЫbku Highlight text and press. Ctrl + Enter
We are
Situational analysis of the death of the MH17 flight (Malaysian Boeing 777), made on the basis of engineering analysis from 15.08.2014The invisible front of warfare. Information operations in the defensive and offensive doctrines of the Canadian Army
Military Reviewin Yandex News
Military Reviewin Google News
80 comments
Information
Dear reader, to leave comments on the publication, you must sign in.