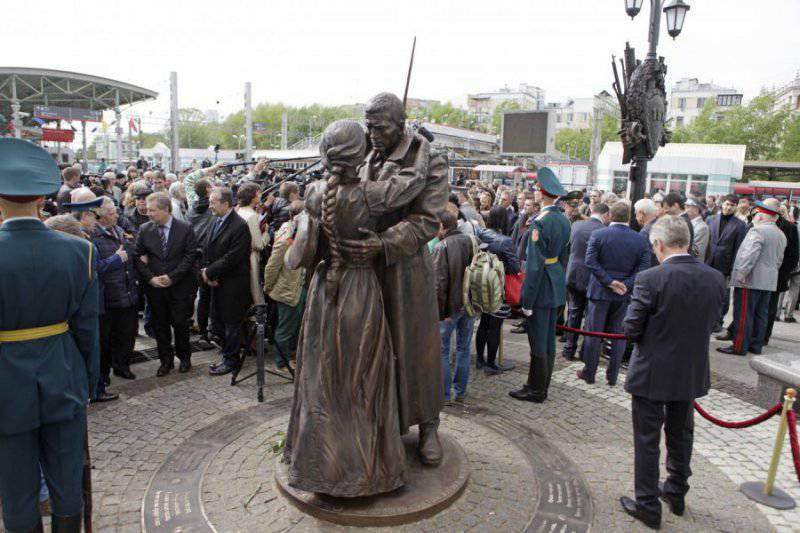 8 May 2014, on the eve of the Victory Day celebrations in Moscow, a monument to the “Farewell of a Slav Woman” was unveiled on the square near the Belorussky Railway Station.

The competition for the monument project was announced a few months ago by the Ministry of Culture of the Russian Federation. The Minister of Culture, Vladimir Medynsky, formulated a competitive challenge - the image of women accompanying their husbands, brothers and sons to the front during the Great Patriotic War. The project of the architect Vasily Danilov and sculptors Sergey Shcherbakov and Vyacheslav Molokostov was chosen. At the grand opening of the monument were President of Russian Railways OJSC Vladimir Yakunin, Minister of Culture Vladimir Medynsky, and veterans of the Great Patriotic War. During the opening ceremony of the monument, Vladimir Yakunin noted “This monument is a symbol of eternity and devotion”. According to Culture Minister Vladimir Medynsky, this is “a monument to what unites us all: love, honor, loyalty to the oath.”

During the celebration of Victory Day in Moscow, we will all be happy to hear the melody of the beloved march “Farewell of Slav”. Culture Minister Vladimir Medinsky called the famous work "a unique phenomenon, a song that connected generations as the main military march of Russia." This march, which has passed through all the wars of the twentieth century, is associated throughout the world with the Russian Empire and the USSR as the most popular Russian march.

As a march, this melody was heard for the first time in 1912, in Tambov. A couple of years ago, we enthusiastically celebrated the centenary of this melody (and this is not entirely in our opinion justified). In Tambov, lived Vasily Ivanovich Agapkin ((1884 – 1964), who, as an orphan, from early youth began to serve in military orchestras and was already headquarters trumpeter. The cover of the first edition of the march read: “Farewell Slav. Newest march to events on Balkans. Dedicated to all Slavic women. Agapkin’s writing. ”In the autumn of 1912, the First Balkan War began during the
Bulgaria, Greece and Serbia with Montenegro have finally ousted Turkey from the Balkan Peninsula. The First Balkan gradually grew into the Second Balkan, and then into the First World War. Simferopol musician and publisher Yakov Bogorad took part in the finalization of the march. “Farewell of the Slav” as a published melody was a piece of music for the military orchestra, and it contained no words in its pure form. The melody of the march combined in itself a life-giving faith in a future victory and an awareness of the bitterness of inevitable losses from future battles. This march was composed in violation of all canons. There have never been written marches in the key of E-flat minor, which first of all confirms that the melody was not originally intended for the march. "New", as written in the notes of V.I. Agapkin, it is difficult to call this work. Thus, the famous musicologist Yury Evgenievich Biryukov noted that the march was based on a well-forgotten folk song from the times of the Russo-Japanese War.

“Oh, why were we slaughtered as soldiers, being stolen in the Far East?” It was in this form that this “tearful” soldier's song with a very stretched, sad melody I myself heard the harmonica on the Grafskaya quay of Sevastopol in 1995. Of course, the rhythm of the march and the songs are very different, but the rest of the melody is very similar. This song is still sung in the Crimea. The fate of the melody has become interesting. It turned out that this song was banned and popular at the beginning of the twentieth century, therefore its text was repeatedly mentioned in writings by writer A.I. Kuprin, calling it “Balaclava passive” (Kuprin’s letter to Pyatnitsky on October 27 on 1904). 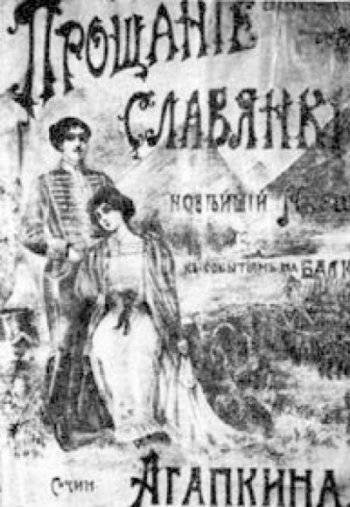 The “Farewell of Slav” march written in connection with the Balkan events turned out to be surprisingly Russian and became very popular during the First World War. In 1915 in Kiev, the first gramophone record “Farewell of the Slav” was released. One of the first, probably, to the melody of “Farewell of the Slav”, a song of volunteer students who went to war appeared. There were the words: "We are the children of the great fatherland, We remember the precepts of the fathers, The fighters who perished for the brink of death by the Heroic death". And in July, the 1916 of the year during the Brusilov breakthrough, the soldiers sang: “On rough roads of Galicia, Raising the June dust, Squadrons go by a line, Priminaya road feather grass. Farewell, Mother Russia! We leave tomorrow for the battle. We are going to defend Your borders and peace! .. ”During the Civil War, the march“ Farewell of Slav ”was in demand, mostly in the White Guard troops. In the army of Kolchak they played (“Siberian March”) with the same tune and with the words: “Siberia's fields are empty, the Volunteers are ready to go. For the edge of my dear, to the cherished goal, Let everyone with faith go, go, go! .. "

For the Red Army commanders, the march was associated with imperial Russia. Because of this, he was under an unofficial ban in the 1920 for a long time. But despite this, the march "Farewell Slavyanka" in the Russian province was performed often and with great soul (which was not in the capitals). He thundered in the regimental orchestras at parades in the outback, at rural parties, and even on Sundays in urban recreation parks. On such a wonderful melody no prohibitions acted. In the meantime, Vasily Agapkin became a Red Army trooper in the 1 Red Hussars of the Warsaw Regiment of the Western Division. After the Civil War, he became military bandmaster of one of the Tambov garrison orchestras. In 1922, Agapkin and his orchestra were left in Moscow to continue the service, he continued to compose music. During these years his famous waltzes “Magic Dream”, “Love of a Musician”, “Blue Night”, and “Orphan” were popular. They could be heard in the Hermitage Garden, during the concerts of the orchestra conducted by Agapkin. March “Farewell of Slavic women from afar at last in 1929 year.

From eighty years of his life, sixty years old Vasily Agapkin gave to military music. He conducted the Moscow Garrison Military Band at the 7 parade of November 1941 in Moscow, and the “Farewell of Slav” march was performed there (judging by the memoirs of contemporaries). The trains went to the front and from the front and arrived precisely to the sounds of this march throughout the war. Yes, and the radio played the march often. But at the parades, the march was rarely used - just his melody is not too pompous, as it should be at ceremonial events.

The march “Farewell of the Slavs” got a second life and new popularity in 1957 year due to its inclusion in the film of director Mikhail Kalatozov “The Cranes Are Flying” with the brilliant play of artists Tatyana Samoilova and Alexey Batalov. The amazing tune fascinated the audience in the famous stage in the schoolyard - the assembly point of draftees before being sent to the front. Seeing volunteers. Voltage last seconds at home. Despair. And at that moment the orchestra rang out “Farewell of the Slav”. To the sound of an old military march on both sides of the street along with
the moving column of volunteers shouting, crying, waving hats, handkerchiefs, escorting run ... The film was so accurate that it conquered all the spectators, whole generations of Soviet citizens, he also conquered abroad (as a result, at the Cannes Film Festival 1958 the film received the "Golden Palm") . After that, the march began to play at all the parades. In 1964, march author Vasily Ivanovich Agapkin died and was buried at the Vagankovo ​​cemetery in Moscow.

They reacted to the “Farewell of Slav” march abroad as well: in 1924, the “Free Russia” march appeared, performed in Finnish by singer Otto Pikkonen; in 1937, the Polish soldier's song “Weeping Birches Loud” was written on the words of a certain R. Slezak, who became the song of Polish Resistance “Weeping Willows Loud” in 1943; There is an option in Hebrew; in the GDR in 1986, they released an instrumental version called Slawianka in the treatment of Hans-Jurgen Roland.

The text officially approved in the USSR, starting with the line “This march did not stop on the platforms ...”, with chorus “And if the country calls on a campaign ...”, was written in summer 1965 of the year by Arkady Fedotov (sometimes co-authored by J. Lednev). It was performed by the ensemble named after A.V. Alexandrova. This text reflected history march.

This march did not stop on the platforms
On the days when the horizon blazed.
With him our fathers in smoky cars
The trains were taken to the front.

He defended Moscow in the forty-first,
In the forty-fifth walked to Berlin,
He went with a soldier to Victory
On the roads of difficult times.

Chorus:
And if in a hike
The country will call
For the edge of our native
We all go to the holy battle!

In 1968, the composer E. S. Kolmanovsky in the song “I will never forget you”, to the words of K.Ya. Vanshenkin as a refrain, gave the tune of this march. The march “Farewell of Slavs” in the USSR was replicated by the million-volume records of the firm “Melody”. This march has repeatedly sounded in television programs, in plays and films about the war (for example, in the Belorussky Railway Station, in the Great Patriotic War). The most recent text available was written in 1990 by leading actor of the Irkutsk Folk Drama Theater Andrei Viktorovich Mingalev.

The march “Farewell of Slavs” in Russia was always perceived with a bang, was loved by the whole country, therefore in the 1990 march “Farewell of Slavs” and several versions of the text were considered in the Kremlin as a new Anthem of Russia. They say that the idea of ​​making the work of Agapkin the main Russian melody was expressed by the poet Joseph Brodsky, who lived in the USA, and Mstislav Rostropovich volunteered to persuade the then president Boris Yeltsin to do so. This idea was supported by General Alexander Lebed, Secretary of the Security Council at that time, and a number of other politicians and public figures. The issue was discussed in the State Duma. The initiative groups could not agree on the proposed text options. Although the text of Andrei Mingalev’s words “Stand up for Faith, Russian Land!” Seemed the closest to the ideal. The first verse and chorus are as follows:

We packed a lot of songs in my heart,
Chanting native lands,
We loved you unselfishly,
Our Russia is the Holy Land.
You raised the chapter high,
Like the sun shone your face
But you became a victim of meanness,
Those who betrayed you and sold you.

Chorus:
And again, hike! The pipe is calling us!
We will again get on the job
And all will go to the sacred battle.
Stand for Faith, Russian Land!

This version, the most beloved by compatriots, is widely known by the Kuban Cossack choir, its other arrangement is in the repertoire of Jeanne Bichevskaya.

Ctrl Enter
Noticed oshЫbku Highlight text and press. Ctrl + Enter
We are
The defense of the railway station in BrestBasil the Dark - a bloody oath-breaker or martyr?
Military Reviewin Yandex News
Military Reviewin Google News
37 comments
Information
Dear reader, to leave comments on the publication, you must sign in.