Another US Chess Game 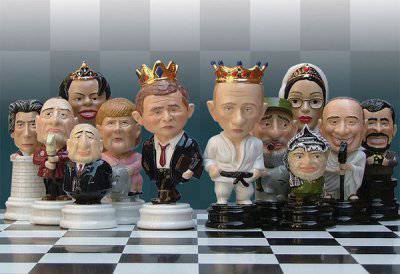 For nearly half a year, events have taken place in Ukraine that cannot leave the common man indifferent. Opposition, exterminating the hands of the pro-fascist radicals of the Right Sector and funded by the United States, seized power. The legitimate (even if weakly character) president fled the country. From that moment on, the junta managed to lose the Crimea and unleash a war in the southeast. What to expect next? Who benefits from this game? These questions interest not only politicians, economists, oligarchs, but also ordinary citizens, both Ukrainians and Russians.


In his book The Great Chessboard, the American political analyst Z. Brzezinski called Ukraine an important geostrategic center (along with Azerbaijan, South Korea, Turkey and Iran), but far from being a geostrategic player. Who unleashed this deadly game and who is responsible for 46 people who were burnt alive in Odessa and the deaths of ordinary citizens of south-eastern Ukraine?

The United States understands Russia's growing role on the "great Eurasian chessboard." Russia is the most important economic partner for the entire continent, the country has almost solved all its internal problems that have tormented it since the beginning of the 90-s, and in a relatively short time could build a powerful and professionally trained army. And naturally, America, which has chosen for itself the path of the only world hegemon, cannot calmly look at a strong Russia. She just needs to critically hold another deadly chess game. It is desirable at the borders of Russia, it is desirable that the Russian-speaking people suffered. And where, if not in Ukraine? This field of the “Eurasian chessboard” is the most successful, since both the opposition is prepared and the economic prerequisites are more suitable. After all, according to Z. Brzezinski, "without Ukraine, Russia ceases to be a Eurasian empire."

But why should a modern democratic Russia necessarily pursue the goal of a classical medieval empire? Ukraine received the freedom it wanted as a result of the collapse of the Soviet Union. But today, Kiev authorities have forgotten that powerful production and infrastructure were built by the Soviet Union, and not by the EU and not at the expense of the IMF. Russia called on the fraternal Ukrainian people for close economic and cultural cooperation (this is not only about Gazprom’s discounts on energy raw materials). And what did those who first signed the peace agreement answer, and then began to kill their own citizens? Ukraine refused not only the hand of help to Russia, but also refused the cultural bond of nations, refused to celebrate Victory Day, recognizing all those who wear the ribbon of St. George, enemies and separatists.

The strife in the Ukraine-EU-Russia triangle inevitably weakens both Russia and the European Union. In a global sense, this is beneficial to the United States, since behind the pro-European rhetoric and ostentatious desire to fully support the peoples of Europe in their quest for "democratic values" hide obvious geopolitical interests. Do not give the eurozone to strengthen its economic position, and the euro - to knock out the dollar, and at the same time to maintain its own influence in Europe.

The US geo-strategic chess games have already destroyed dozens of countries, from Yugoslavia to Ukraine.

Only the White House should understand that in these chess games not pawns are lost, but human lives, and the US geopolitical power is not able to fight with real human values ​​and rights.