5 May 2014
243
Western media continue to comment on the tragic events in Ukraine. While the English-language publications are looking for someone's hand in the bloody events in Odessa, journalists from one of the German publications found another opportunity to scare the Europeans with "insidious Russia."
So, May 5 on the site of the German magazine Focus appeared an article with the headline "Now Russia will attack Estonia?" (Greift Russland jetzt Estland an?) It contains the words of NATO Secretary General Anders Fogh Rasmussen, who "does not exclude such a development of events."

"NATO has a backup plan for all occasions. We have developed a plan to protect the members of our bloc. If Russia decides to attack, say, Estonia, NATO will take all necessary measures to protect the country," Rasmussen said in an interview with the German edition of Frankfurter Allgemeinen Sonntagszeitung (FAS).
Focus magazine even made a quote from this publication in the headline. True, after some time he is in a constantly updated collection News about Ukraine (where Western media inevitably mention Russia) has been changed. However, the screen of this publication remained: 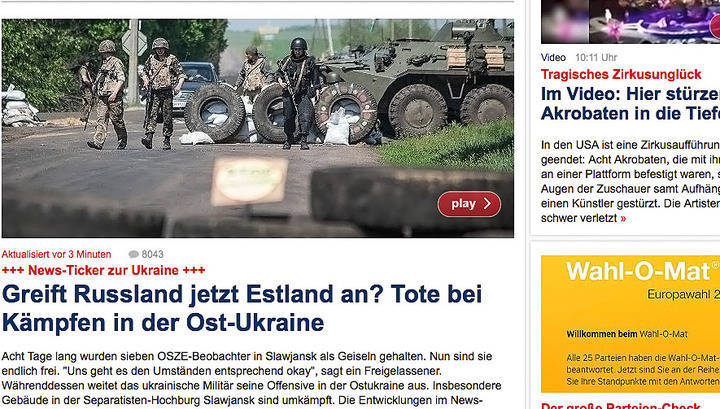 Ctrl Enter
Noticed oshЫbku Highlight text and press. Ctrl + Enter
We are
Odessa, 2 May. We remember and remember ...
Military Reviewin Yandex News
Military Reviewin Google News
243 comments
Information
Dear reader, to leave comments on the publication, you must sign in.