1 May 2014
115
A flurry of criticism struck leading German publications for one-sided coverage of events in Ukraine. A whole stream of letters comes from readers and viewers who are tired of the constant image of “evil” Russia and the “aggressor” Vladimir Putin. As reported by the NDR channel, the Germans are protesting against being “turned on” by a country that has not done them any harm. 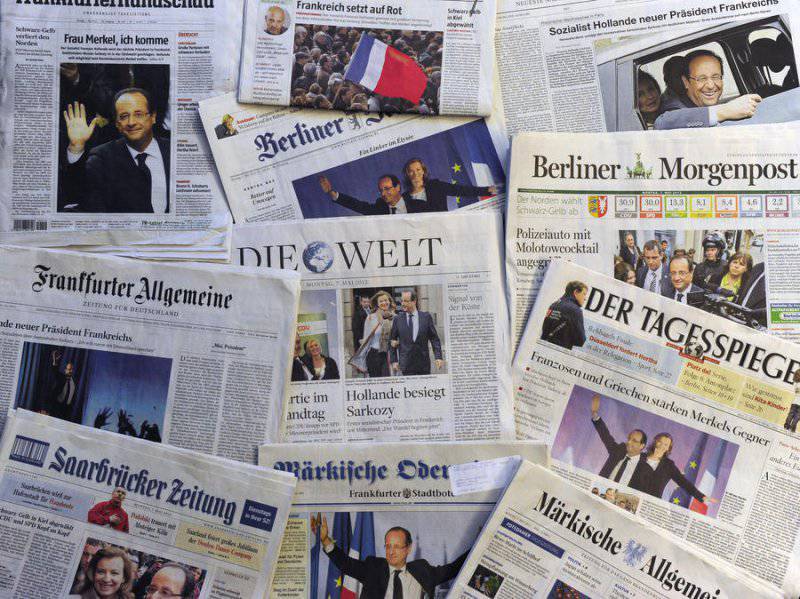 The journalists of the German TV channel are amazed at the number of critical reviews: “It rarely happens that so many viewers write letters complaining about how dishonest the media is with Vladimir Putin and Russia.” They shared their impressions in the storyline, translated by InoTV.
“I strongly protest against unilateral reports on the Crimean crisis!”, “Another propaganda campaign against evil Russians?”, “Half-truths, lies, disguises, frauds, disgusting investigations of upcoming journalists - all this can no longer be tolerated” - these are just a few comments, quoted in the plot. They are received by journalists from many editorial offices in Germany, including the world-famous media, including Die Zeit and Der Spiegel.

Exhausted by a biased approach, viewers and readers even called for an attack on the main German media, journalists said. They are confident that these publications adhere to the pro-American position: "It is a shame that German journalism has become the mouthpiece of NATO and the Merkel government, which is subordinate to America." Such comments support thousands of users, according to the plot.

Some journalists gradually realize that the opinion of a significant part of German society about Russia and its foreign policy in the current situation is significantly different from the information supplied by most local media.

What is the reason for such a difference? According to the journalist Friedbert Moirer, the Germans are against the prospect of joining the “starving people from Ukraine”, especially after Bulgaria and Romania have already joined the EU.

However, the NDR also offers a different version: in comparison with the US, Russia already finds it difficult to frighten someone. NSA surveillance, killerless drones, Guantanamo and Abu Ghraib deprived the Germans of their illusions about America.

According to the former Moscow correspondent of the ARD channel, Gabriele Krone-Schmalz, the reason for the audience outrage can really be the low level of journalism in materials relating to Russia. In the reports there is no place for the absolute majority of those who voted at the referendum in the Crimea.

Russia's actions are called “annexation,” although from the point of view of international law, this is incorrect, she says: “If 90 percent of Montenegrin people vote for the EU, then we consider this an excellent result, and if 90 or 97 percent of Crimea's residents vote for Russia, then we we say that this can not be. "

NDR journalists cite as an example a few topics from recent talk shows: “Great Putin, is Russia dangerous again?”, “Putin is coming again, is the Crimea just the beginning?”, “Already in eastern Ukraine they are playing with fire, and there is a struggle. Our theme: the ice age in the spring.

Should we be afraid of Russia? ” The message is the same all the time: Russia is dangerous, and Ukraine is a victim. Any other opinion is automatically under attack, the authors of the story summarize.

The opinions of Western journalists and their readers differ not for the first time: polls and comments on the site of popular publications often contradict editorial policy. For example, 92% of readers of The Independent chose Vladimir Putin as the most imposing politician, and 54% of Germans interviewed for Der Spiegel were in favor of joining the Crimea to Russia. The NDR plot is rather an exception to the rules against the background of one-sided coverage of Russia by Western media.

Ctrl Enter
Noticed oshЫbku Highlight text and press. Ctrl + Enter
We are
CNN Channel apologized for the photo of Vladimir Putin in the story of the militant "Islamic State"Results of the week. "They stood to death like buttons!"
Military Reviewin Yandex News
Military Reviewin Google News
115 comments
Information
Dear reader, to leave comments on the publication, you must sign in.