Fallen Berlin in the summer of 1945-th: Pictures from the Life archive

12 May 2011
2
The main part of this collection is the images of William Vandivert (William Vandivert, 1912-1989), which appeared as follows. In the summer of 1945, American and British troops entered their Berlin zone in exchange for the liberation of the territory of the Soviet zone, agreed in Potsdam. Following Western troops, reporters from leading publications, including Vandivert, went "into reconnaissance". Berlin lay in ruins, and the rigid order of the “cold war” was still not settled, and the borders of the zones could be crossed quite freely, which they used. That is why about half of the July photos of Vandivert were taken in the Soviet zone of occupation of Berlin - it went deep into it up to one and a half kilometers. And, of course, both Soviet soldiers and officers fell into his lenses, you will see that.

Valuable, these pictures are their detail and quality, as well as neutrality - they carry a minimal propaganda burden and simply record the condition of the city. I was especially impressed with the detailed photographs of the Reichstag murals by the Soviet soldiers, as well as the destruction of the Old Reich Chancellery in Wilhelmstrasse. 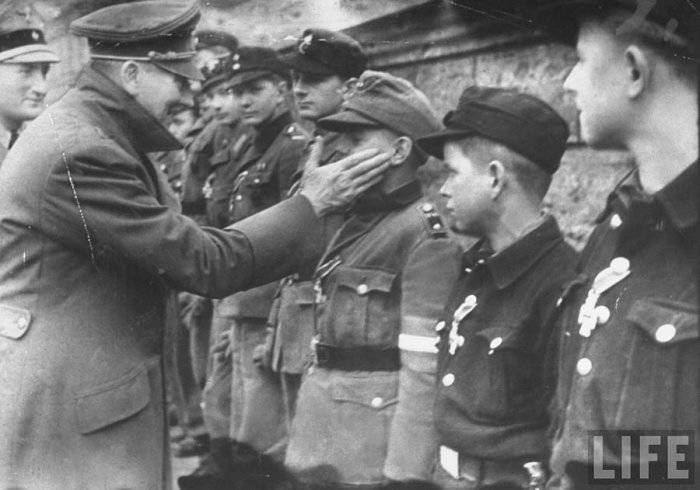 For the seed, the well-known snapshot of the Führer, taken on 20 on April 1945, where he presents the Iron Crosses to young boys from the Hitler Youth. He also belongs to Life, the magazine bought (or took a trophy, I don’t know for sure) the unique photo collections of Hugo Yager and Heinrich Hoffmann. The second is the official photographer of Hitler. The picture was taken at the back wall of the Reich Chancellery, in my opinion Old, inside the Garden. 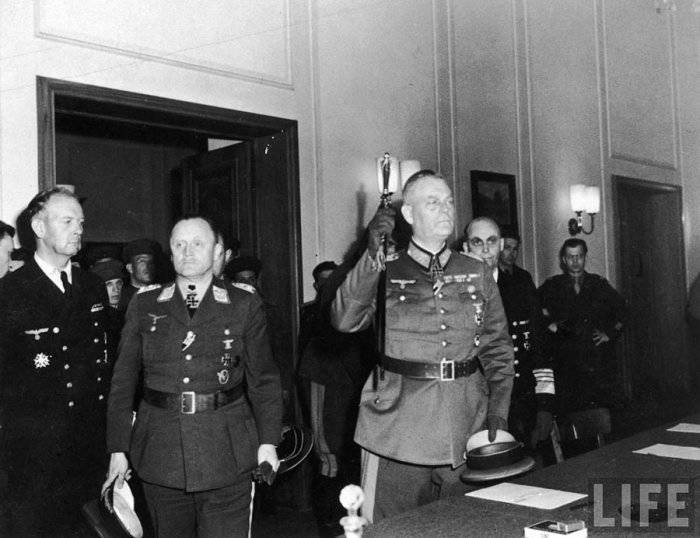 This picture is from Karlshorst, where the Wehrmacht officially surrendered to the Allies. Made in the evening on May 8, Field Marshal Keitel (with a rod or some other ceremonial object), Stumpf from the Luftwaffe and Admiral Friedeburg come in to sign for the surrender. 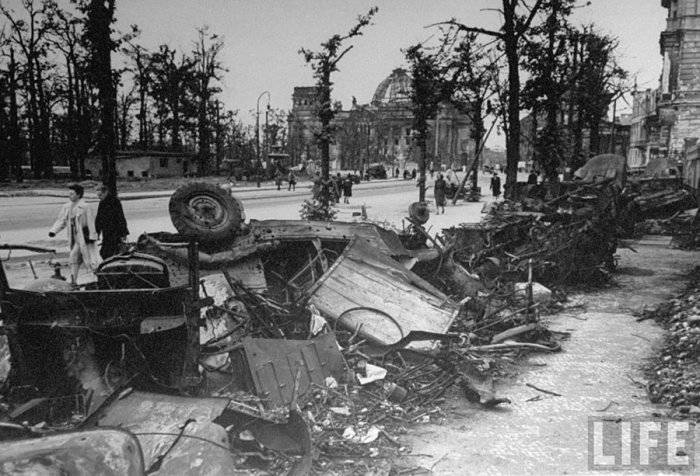 And now - until the end of the post - the July series of Wandiverta will go.

View of the Reichstag from the edge of the Tiergarten. The highway leads to the Brandenburg Gate, they are to the right and not visible. As you can see, demining has already happened, the equipment has been dumped along the edges of the road, and civilians are walking along the sidewalks. 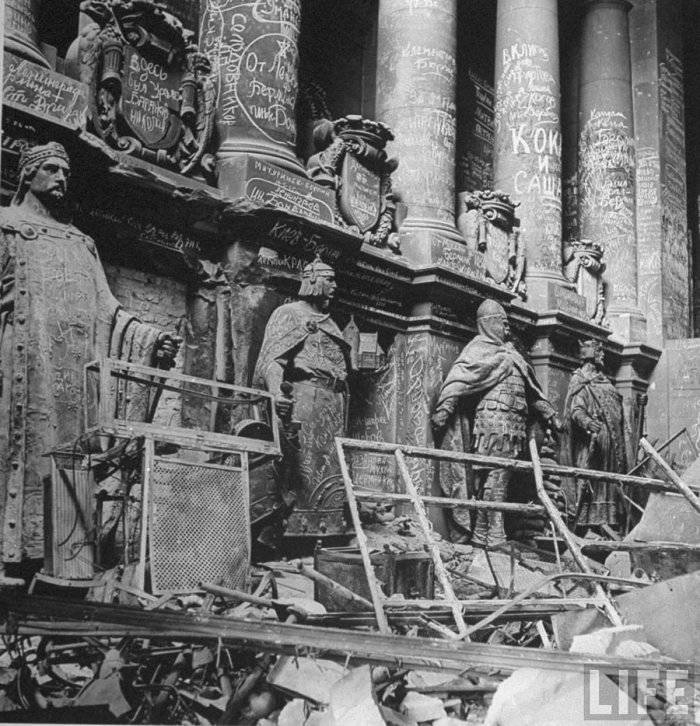 Now we come to the Reichstag itself.
This, if I am not mistaken, is one of its external colonnades. 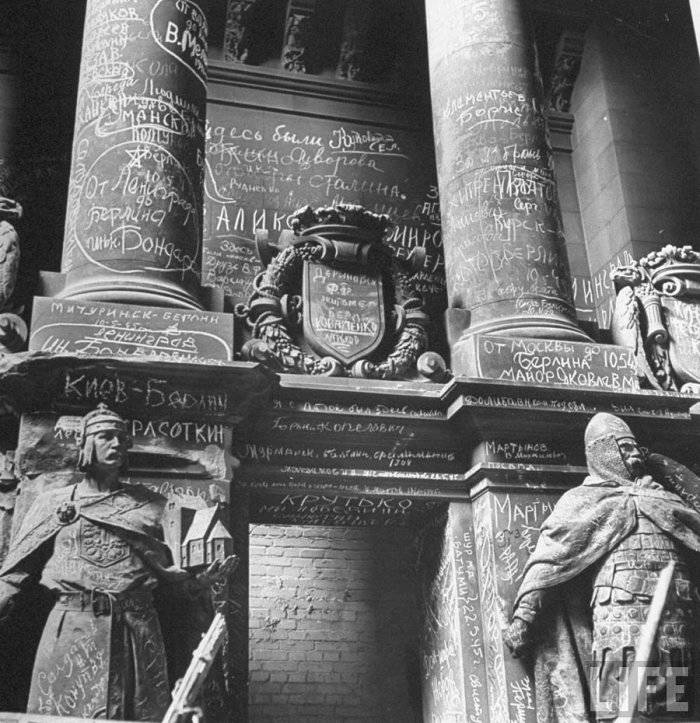 Here the paintings are a bit larger, many are well read. Look, there are many cities there - Kiev, Leningrad, Michurinsk, Kharkov, Batumi, Moscow, etc., look for your own. 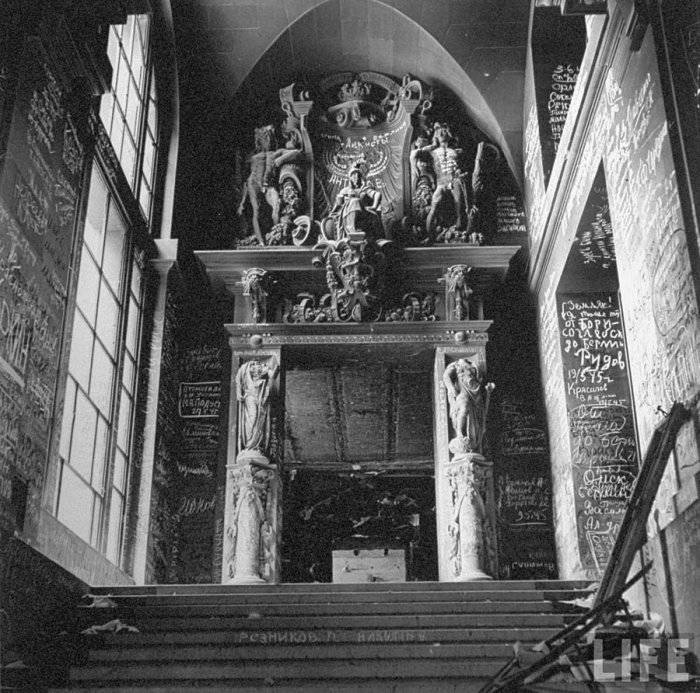 Inside, the Reichstag was also painted almost to the ceiling - apparently, there was not enough space outside, and the soldiers left autographs on the walls inside. 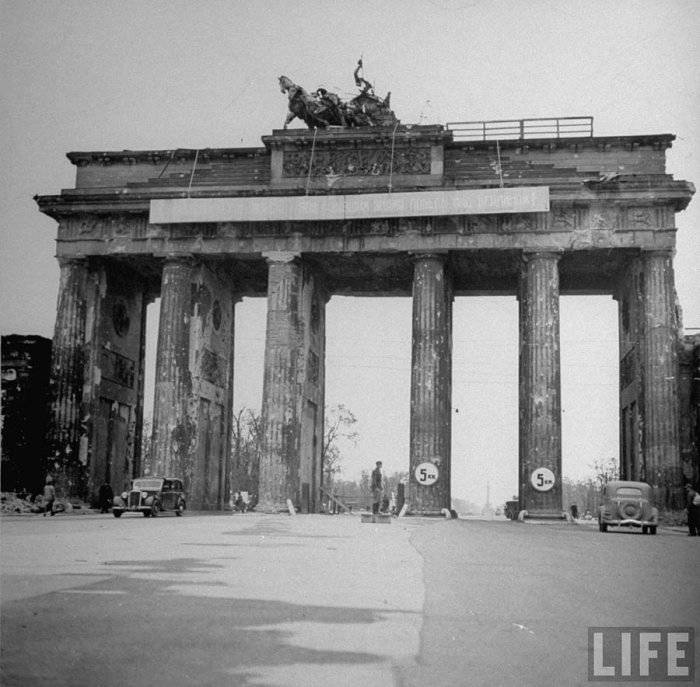 Brandenburg Gate through 2 month after the end of the fighting. They have already been cleared of debris, in the central span there is a garden for patrols, and two on the right and two on the left are used for movement. The travel speed limit is 5 km / h. It is also seen that the horse group at the top is partially damaged and tumbled down.
The border of the zones passes right here, in front of the gate. 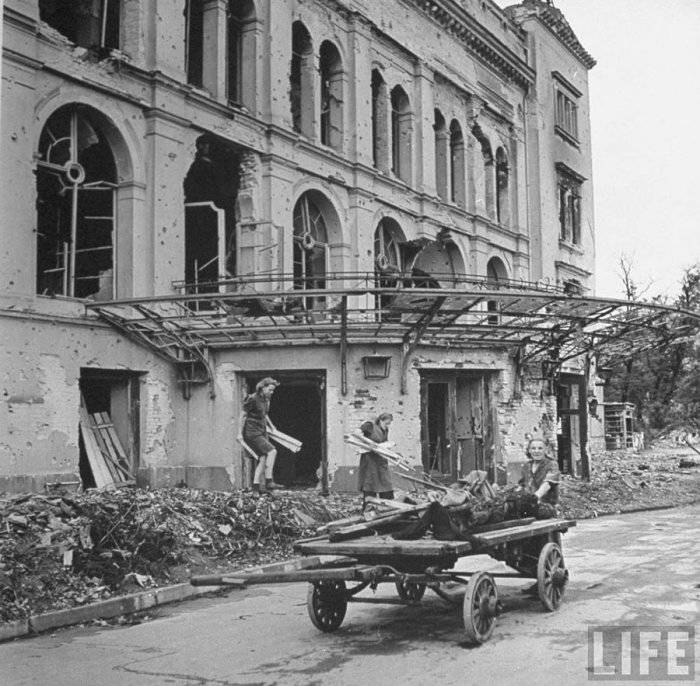 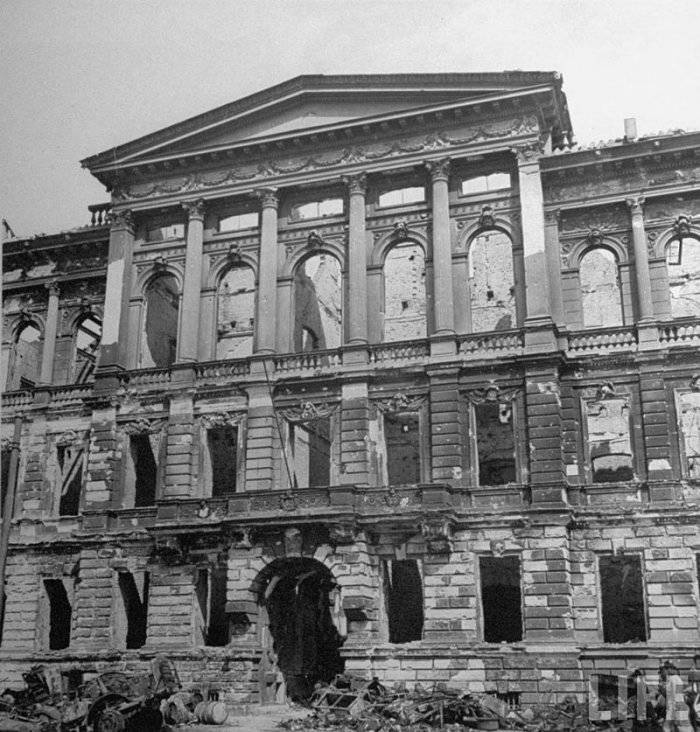 Now we are moving south from the gate, along the German-Goeringstraße. Here is a snapshot of a dilapidated American embassy. 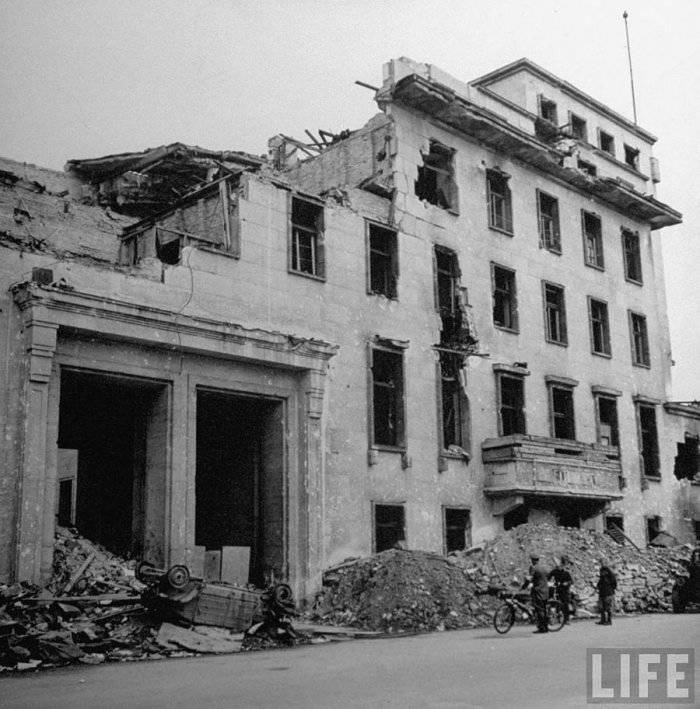 Without reaching Potsdamer Platz, we turn left on Fossstrasse, pass through it, and exit to the Old Reich Chancellery, with a facade on Wilhelmstrasse. As you can see, it was badly damaged, despite the fact that the Germans stood there until the very end and cleared it already at the time of the surrender of the garrison (May 1). What exactly is destroyed - by airstrikes, large caliber artillery or shelling of medium caliber? It seems to me - either the first or the second.

Behind her immediately - the entrance to Hitler's bunker, to him meters 50-70, if through the building. 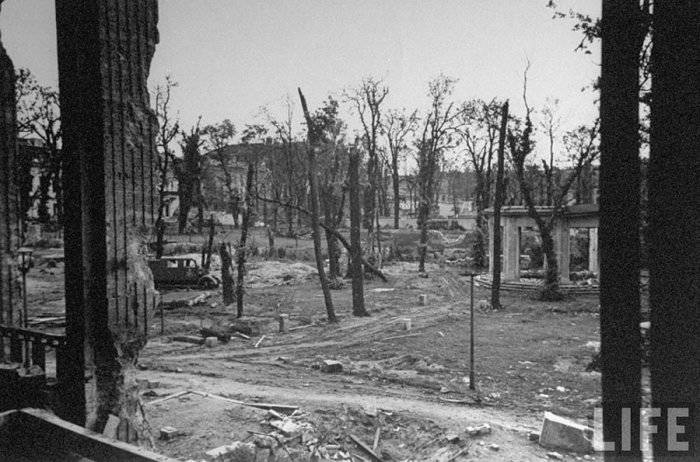 View of the Garden of the Reich Chancellery - which is also turned into a desert. True, the rotunda gazebo, as we see, survived (but then it would be demolished in the general cleansing of the territory from the remnants of the New Reich Chancellery, in 1948). If you walk to the north garden, then you can come right to the "Adlon" and the Brandenburg Gate. The entrance to the Führerbunker is a little right, we don’t see it in the photo. 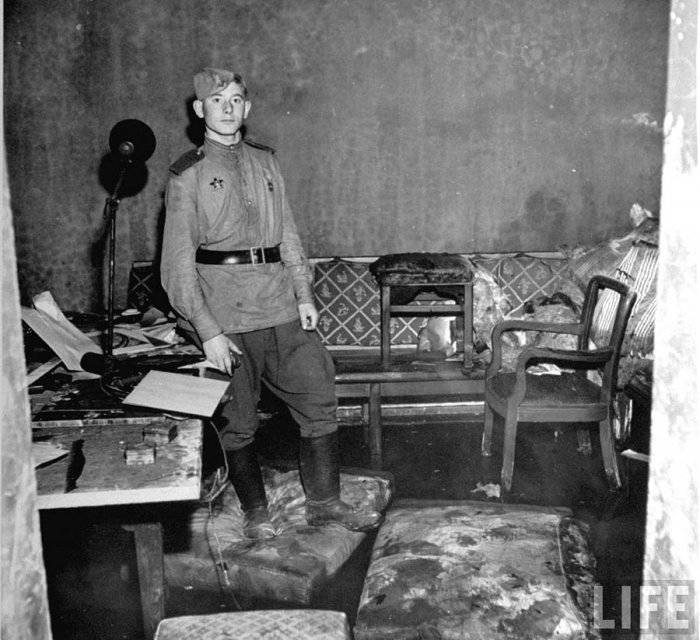 Pronik Vandivert and the Führerbunker, who was in the Soviet occupation zone. In the photo, a Soviet soldier with the Order of the Red Star and a medal posing for him. The annotation says that this is the Goebbels family in a bunker; the Reich Minister of Propaganda lived there until May 1. 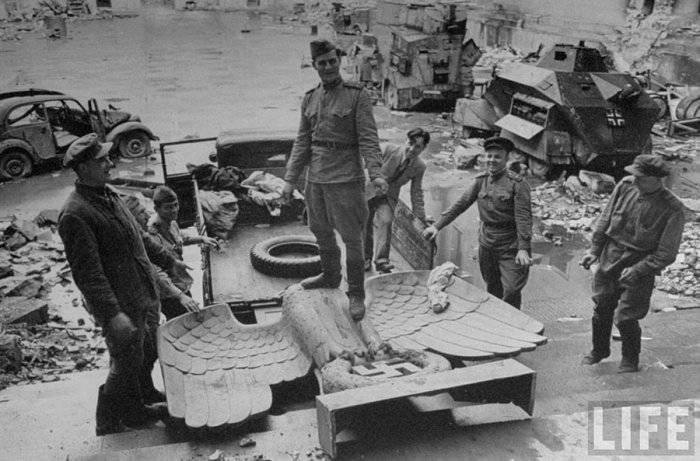 At the Reich Chancellery. Soviet soldiers drove the car to the stairs, and something is loaded (perhaps - this very eagle). The destroyed parts are lying around, and they pose on a downed eagle with a swastika. In the background - a lot of broken equipment. In the truck is a civilian dandy in a suit. 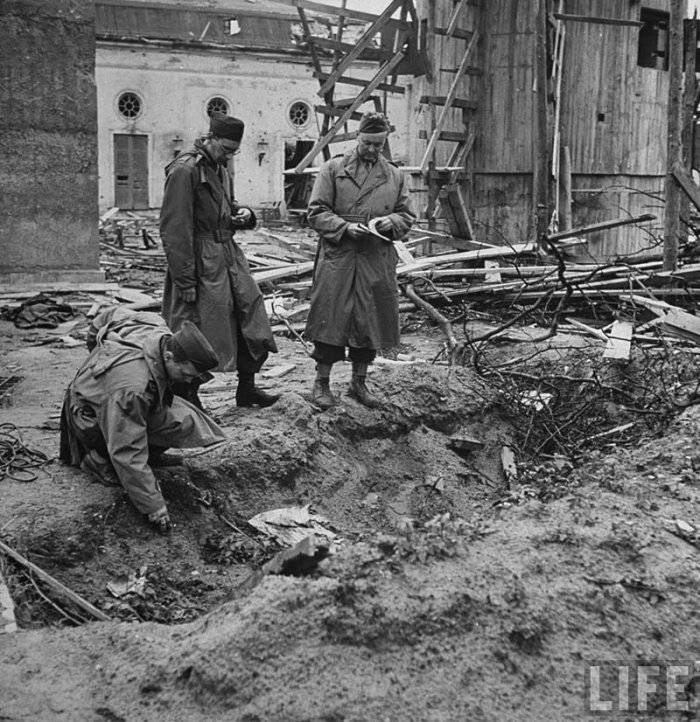 In the garden of the Reich Chancellery, in the background is the terrace of the Diplomatic Hall. There are already allies (Americans) poking around in the ground, looking at something. In this trench, Kempka burned the body of the Fuhrer and Eva Braun. 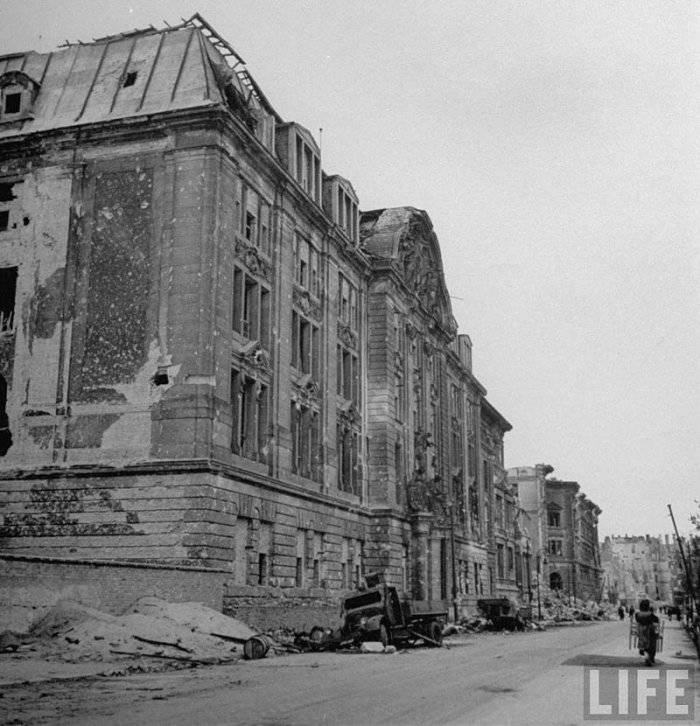 If you go further south, then you can look at the main building of the Gestapo. Then it will be blown up, and through 16 years the wall will pass right here, in its place. Now there is a museum called "Topography of Terror". 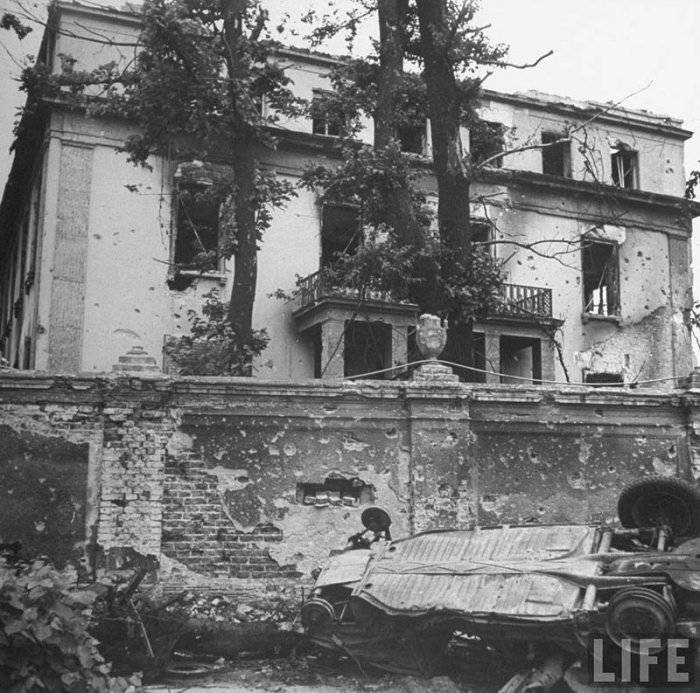 Now we will leave on Wilhelmstrasse, to the Ministry of Propaganda, enclosed by a powerful stone fence. This is also a Soviet zone of occupation, the reporter went there at his own peril and risk. 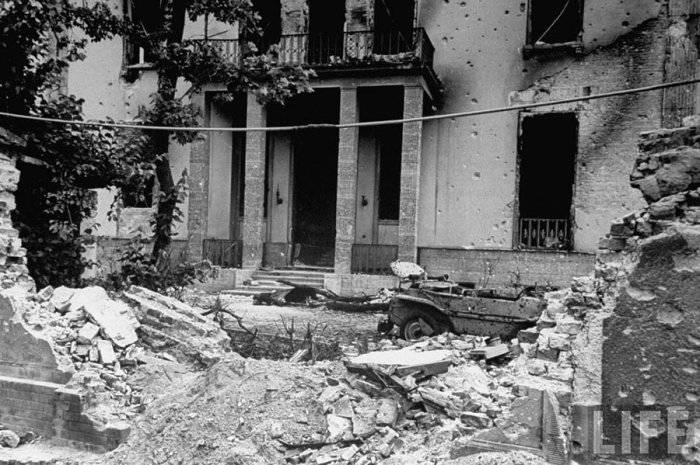 One of the entrances to the Ministry building. 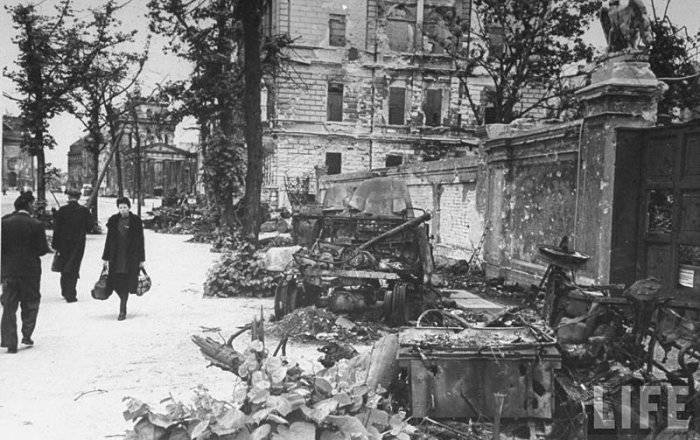 And another view, also signed, as "near the Ministry of Propaganda." And here on the street all the crumpled machinery is dragged to the edge. 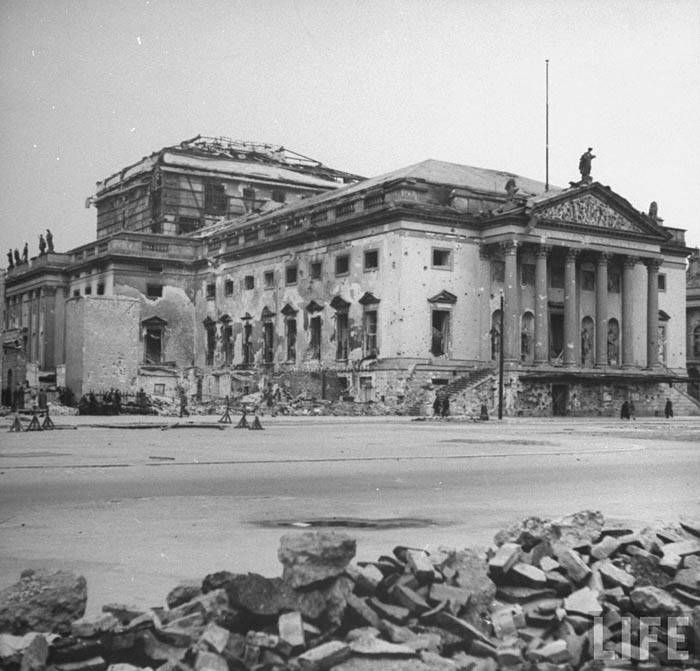 The State Opera on Unter den Linden, also a Soviet zone of occupation. She is whole mostly visible chinks from shells. 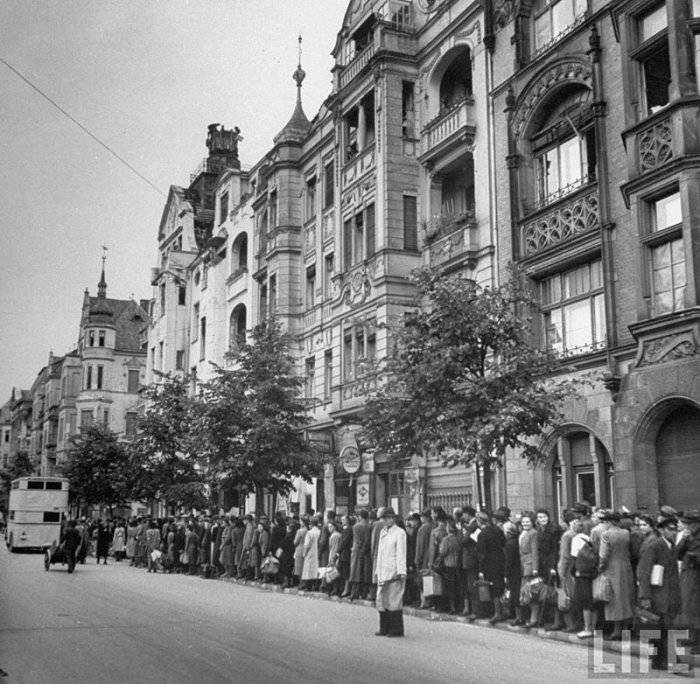