Why do the Bundeswehr need Russians? 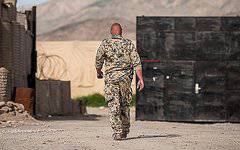 
Despite the Ukrainian crisis, the Bundeswehr (German Armed Forces. - Appro. Lane.) Closely cooperates with Russia in the issues of withdrawing its contingent from Afghanistan. Recently, however, an alarm has been growing in Berlin about how long this cooperation can continue.

It's late at night, but he continues to work. Despite the cold and fatigue, Vyacheslav Kuzmin is in a great mood. According to him, his business partners work punctually, fast and reliable. In short, this is the "German style".

Kuzmin, 59, is standing on the airfield of an airfield in Afghanistan's Mazar-e-Sharif. He serves as a navigator aboard the Russian An-124, one of the largest transport aircraft in the world. Now he most often has to communicate with his German colleagues from the Bundeswehr. The Russian An-124 makes several flights to and from Afghanistan, transporting German aircraft from the Hindu Kush Tanks. And if there is still space left on board, then other equipment and other equipment of the German contingent.

The withdrawal of German troops from Afghanistan has intensified just in recent months. Week after week the number of vehicles is reduced: their removal is the most difficult task from the point of view of logistics. This process must be completed by the end of the year. However, without the help of Russia, this will be impossible, regardless of the further development of the Ukrainian conflict: as many as four routes through which the Bundeswehr withdraws its forces from the Hindu Kush run through Russia. And the An-124 transport workers were managed to get by the Germans under the corresponding partnership program SALIS, in which Russia participates.

This cooperation in Afghanistan seems to continue further, despite the situation in Ukraine and the conflict between Russia and the West. However, fears are growing in Berlin. “Because of the SALIS program, we are in limbo and dependent on others,” said a member of the budget committee of the Bundestag (the lower house of the German parliament. - Approx. Ln.) From the green party Tobias Lindner. “The government should take care that we don’t have to face blackmail.”

Last Tuesday, a meeting was held in the German Ministry of Defense on the possible consequences of the Ukrainian crisis for the withdrawal of the Bundeswehr from Afghanistan. Inspector General Volker Wieker (Volker Wieker) expressed concern about contracts with Russia during the discussion: “At the moment everything is going well. But we are watching the situation. ”

In fact, the main general of the Bundeswehr can in no way refuse to Russian transport workers. The withdrawal of forces is carried out mainly through Mazar-i-Sharif, as well as through the Turkish Trabzon on the Black Sea coast. More than a hundred flights from Hindu Kush have already exported more 1000 containers. “We must insist on the fulfillment of the treaties,” warns also the chairman of the parliamentary committee on defense, Hans-Peter Bartels, a member of the SPD faction.

The fact is that land withdrawal routes cannot be considered a real alternative to air: they would pass through Russian territory. Since the beginning of 2013, more than 400 containers with Bundeswehr property have been exported in this way. This is as much as 9% of the total amount of cargo exported from Afghanistan.

In the extreme case, the exit would be their export by sea through the ports of Pakistan. But this path is considered the most dangerous, because a crisis is raging in Pakistan itself. In addition, Taliban militants control part of the country’s territory. Therefore, none of the generals is seriously considering the option of transporting valuable equipment or dangerous goods through Karachi.

While the Bundeswehr assures that the withdrawal of forces from Afghanistan is going according to plan. “There are no signals about restrictions on the transportation of goods,” said the representative of the Ministry of Defense. It is not clear, however, how Russia will respond if additional sanctions are imposed on it by the West.

And even if the Bundeswehr in a hurry have to look for alternative ways to transport their goods from Afghanistan, it will have to enter into new contracts with partners, which Germany has so far frankly neglected. And this will make the withdrawal of troops even more expensive than previously thought.

The military campaign in Afghanistan since 2008 has cost German taxpayers nearly a billion euros. And although in 2013, for the first time in a long time, expenses were significantly reduced, the number of soldiers of the Bundeswehr in Central Asia remains almost at the same level. And now, about what their withdrawal can do in alternative ways, now nobody even wants to think.

It would have been much simpler if the Bundeswehr were not dependent on Russian transport aircraft, and had finally received a similar technique. But shipments of the already ordered Airbus A400M have been constantly delayed, and most of the generals have only seen this car in photos.

In November, the German Air Force must finally receive the long-awaited first aircraft. If everything is going fine now, then at the end of the year it may be too late to withdraw the troops: by that time most of the forces should have left the Hindu Kush. Well, if the withdrawal still have to be suspended, the new aircraft will go directly to Afghanistan.

The last route would be the Pakistani route, but the neighbor of Afghanistan, as already mentioned, was in a crisis.