The latest geopolitical alignment: everything changes with great speed 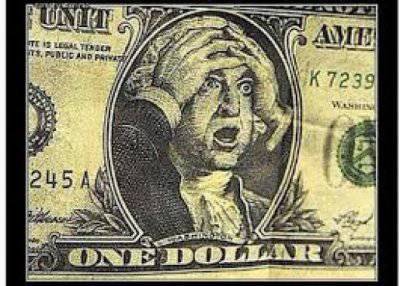 The geopolitical alignment emerges more and more clearly, the evidence of its accuracy comes more and more, and they are more and more eloquent. A systematic approach to understanding the world is linking a multitude of facts and trends into a single picture. Exactly, abstracting from personal preferences as much as possible, and it is necessary to form a global vision of the world.


So, the basic postulate of the whole picture - the US economy is still at its peak. The situation with jobs is not improving, the number of unemployed, poor and homeless is not reduced. GDP is frozen at the point of near-zero growth (and there is a strong suspicion that even this zero is achieved only by skillful manipulation of statistics), debt grows faster than planned, QE programs do not help (and in some aspects even harm). Moreover, the share of the service sector in GDP is approaching half, which, as it were, hints to us that this indicator is exaggerated. In my opinion, the methods of calculating GDP need to be revised, since they do not accurately reflect the real production (the services sector and virtual property must be put into separate indicators). Well, many researchers are unanimous in their opinion that this is a phase crisis, which in the framework of the current neo-liberal monetarist model is not solved in principle.

The second postulate is that the United States is obsessed with preserving hegemony at all costs. For this, they destabilize the Middle East in order to limit the access of the EU and China (possible aspirants to hegemony) to energy resources. For this, the United States tried to create around China a “belt of hostility” (for the sake of this, for six months Obama flew from one Asian country to another in continuous negotiations, but without success). For this, they tried to implement the military strategy of the naval blockade of China (closing it in the South China Sea with the help of aircraft carrier groups and island bases - also unsuccessfully). For this, they tried to block Russia's access to Arctic hydrocarbon deposits with the help of Greenpeace and other "green". For this they are trying to embroil the European Union with Russia, artificially creating and continuing to inflate the Ukrainian crisis.

The stabilization of the American economy in the current neoliberal paradigm is possible only at the expense of the gigantic robbery of other regions, which is much larger than the previous robbery. And this is possible only if they can draw the European Union and Japan into the free trade zone (FTA). Negotiations with Japan the other day ended unsuccessfully - Obama has once again returned to the States with nothing. By the way, I'm not sure that even the FTA will be able to help the American economy. To conquer markets, you must already have goods for them, and the actual production in the United States is in a deplorable state. And to create markets, in the hope that this stimulates the emergence of industries, is too complicated and a delayed strategy that does not work with high probability (too many uncertainties). Despite the fact that a number of leading European politicians occupy a position subordinate to the United States (Merkel, Hollande, Monty), in general, the European establishment understands that the FTA with the United States is extremely unprofitable for Europe, and desperately resists to this. After all, in addition to official politicians, there is also a powerful corporate lobby, and they definitely do not want the United States to improve its financial position at their expense. And so the US is trying in every way to intimidate resisting Europe with “evil Putin trying to recreate the USSR”.

While it turns out not really. Therefore, the CIA heads of Brennans and Vice-Presidents Biden are flying to Kiev to force their Ukrainian puppets to start a full-scale war here, forcing Russia to intervene. In general, over the past few years, US policy (both external and internal) has been a consistent and continuous series of epic faults (lesions). The invasions of Iraq and Afghanistan ended in a fruitless retreat. In Libya, instead of obedient puppets, the power went to uncontrolled warlords, who regularly do something that is obviously annoying the Americans - they kill the ambassador, load the tanker with smuggled oil, or some other kind of pig. Iran calmly withstood all the sanctions; moreover, he began to abuse the EU and other US allies with his counter sanctions (and they need Iranian oil more than their goods to a self-sufficient Iran).

In Syria, Assad also failed to reset, and now every day it is more obvious that they will not succeed. Former loyal allies of the United States in Saudi Arabia and Qatar are increasingly looking towards China - because the United States practically does not buy oil and gas from them, and China buys more and more. And the US attempts to flirt with Iran give rise to additional misunderstandings (as well as some cooling of relations with Israel, which is not surprising). Another US strategic ally, Turkey, is also actively entering into contracts with China, including in the defense sector. Moreover, Prime Minister Recep Erdogan said that if Turkey joins the SCO (Shanghai Cooperation Organization), they will withdraw their application for EU membership (the SCO is preferable for them, and the EU hasn’t scratched it for 50).

In Egypt, the pro-American sect "Muslim Brotherhood" was removed from power (several hundred of its most ardent activists were sentenced to death), and for the first time in several decades Egypt will buy weapons from Russia, not from the United States. Afghanistan and Pakistan, which for a long time were the pillars of the United States in the Middle East, are actually lost to them. In Afghanistan, in fact, the Taliban is ruling, and Pakistan has come close to a complete rupture of diplomatic relations due to numerous acts of aggression by the United States in its address over the past few years. The “belt of hostility” around China failed. The naval blockade also became impossible due to several "tourist landing" on the islands from the side of the PLA. SCO is gaining momentum. China allowed direct cross-transactions between the Hong Kong and Beijing stock exchanges. Russia, Iran, China, and now Japan declare the imminent transition to settlements in national currencies (and therefore, to abandon the dollar as a unit of account). What only brings the sunset of the American economy, which for a long time only kept on this status of the dollar as a means of international payments.

Saakashvili’s Georgian puppet regime failed the invasion of South Ossetia. Attempts to conduct color revolutions in Venezuela, Belarus and Iran failed, the Russian “swamp” movement was extremely marginalized at first, but now it has actually died (it is extremely optimistic to consider its death-cramps). And here, it seemed, a brilliantly deployed coup in Ukraine suddenly turned into the annexation of the Crimea to Russia (actually strengthening its position). And on the US sanctions against disobedient barbarians (their third wave was launched on Monday), the Russians respond with a homeic laugh and demand “Anchor! Anchor! ”(More! More!). So far, the “sanctions” have only led to an increase in the price of oil and a fall in the American stock exchange rating of the NASDAQ, as well as a painful blow to the American puppets in the Baltic States. And the puppet government of Turchinov-Yatsenyuk-Tymoshenko turned out to be incompetent and cowardly, unable to carry out any of the tasks assigned to them by the State Department curators. Although no, they are trying to cope with some tasks. For example, to bankrupt Antonov Design Bureau, which is a direct competitor to the American Boeing and Airbus. Destroy several more strategic industries that are in close cooperation with the Russian Federation. But it is, dirty tricks.

Their American masters need global instability, as in Syria, in order to destroy ties between Russia and the European Union. You can virtually, forcing Europeans to sanctions (which are not beneficial to them much more than Russia), you can physically give orders to some “Right Sector” to undermine gas pipelines and other infrastructure facilities (the PS leader Dmitry Yarosh has repeatedly made relevant statements) . As I already wrote, in Ukraine there is no clash between Russia and Ukraine. There is a conflict between the United States on the one hand, and Russia, China and the European Union on the other, implemented by the United States by local compradors. And the outcome of this conflict depends largely on whether the transatlantic Evil Empire falls, or whether it will bring the rest of the world to chaos. And this is not propaganda pathos, but an objective reality. This is not the only key point (as was the case in World War II). Assad's troops, killing jihadists in the suburbs of Damascus, are bringing the US down. The proposed dedollarization brings the fall of the United States. Iranians, sending oil tankers to China, are approaching the fall of the United States. The defenders of Slavyansk (which is still a symbolic name!), Driving away foreign mercenaries, also bring the US down. The United States imposed new sanctions against Russia. But, unlike our opponent, we do not dehumanize our opponents. The Ukrainian army is dependent, and it is obvious that it does not want to fight with its own people (and with Russia too). Most supporters of Maidan (except for ultra-right groups and professional liberal grant-eaters) are simply misled by total propaganda. And most Americans are normal people who regularly hold anti-war rallies, and they also suffer from exploitation and oppression from their oligarchic government. We are not against people, but against phenomena - this is precisely the difference between us.

Ctrl Enter
Noticed oshЫbku Highlight text and press. Ctrl + Enter
We are
What you didn't want to know about EnglandWhat we lost
Military Reviewin Yandex News
Military Reviewin Google News
67 comments
Information
Dear reader, to leave comments on the publication, you must sign in.