M.Hazin: “Russia must stop paying tribute to the financial Horde!” 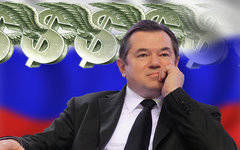 Glazyev’s plan to de-dollarize the economy is the first step in this direction.


The main criterion by which it is possible to distinguish an ideologized discussion from a scientific one is that no one discusses a substantive position: this is only an ideological focus of arguments.

I, by the way, have nothing against discussions about values ​​or principles (which are ideologically ideological by definition), but I am absolutely not satisfied with the discussion in which one of the authors tries to pretend that he uses scientific arguments, while the real reason for his activity is precisely ideological hostility.

The last time I ran into a similar situation a few days ago was when I read the 15 theses of Sergey Glazyev about the de-dollarization of the Russian economy.

I am an economist, and I dealt with monetary circulation quite a lot, so I have something to say on this issue, and I read Glazyev’s theses with great interest.

There are obvious measures, there are - more controversial, something, maybe not, something somewhat strengthened. But there is nothing extraordinary (for example, such that China would not do) in them. At the same time, if we proceed from the fact that the pressure of the West will continue (and it will continue!), Then you will still have to implement such or a similar program, you cannot get anywhere.

But from the point of view of those for whom closeness (or, especially, submission) to the West is a basic principle (and this is already an ideology!), Such a program is unacceptable in principle, regardless of what it contains.

Essentially, such people will not discuss these points, since in their understanding sanctions are a criticism of the “senior partner” (well, or godfather), which must be taken exceptionally positively and corrected the “mistakes” made. In itself, the movement towards greater independence from the West is unacceptable and disastrous.

Since in Russia there are a lot of supporters of submission to the West (that is, the refusal for us even on certain positions of the position of equal partners), which we call liberastam on our site, we had to expect a hard answer.

He came out - on behalf of the leader of the liberal wing of the Russian political elite Alexei Kudrin. And what did he say?

In his opinion, the plan proposed by Glazyev for the de-dollarization of the Russian economy will harm Russia itself. In his Twitter account, Kudrin said that Glazyev’s proposals could be regarded as sanctions, and “worse than the sanctions of the West.”

I note that the use of Twitter is very significant, since essentially there can be no arguments: too little space. But comparing Glazyev’s plan with US sanctions is actually a political denunciation, since he equates the presidential adviser with the forces that today are viewed in society as outspoken enemies.

In this place, by the way, Kudrin actually misses the point, because from his personal point of view the United States not only has the right to impose sanctions on anyone, but the imposition of sanctions itself is a reason for joy: scolding means love! And this means that its text was directed not so much to his comrades (that is, to other liberasts), who already know that Glazyev is an enemy, but to those for whom Kudrin still has credibility (well, how many years he was Finance Minister and ensured the country's economic growth!) and who sincerely sanctioned outraged.

In other words, the text of Kudrin is in fact an instruction for liberastov how to attack Glazyev.

Theses of Glazyev are very dangerous for a liberal party, since in theory they can become the basis of a plan like the May decrees of Putin. Liberasty has long ignored Putin’s demands for their execution, but if the president has many of these plans and all of them are just as defiantly ignored, this can be critically dangerous for many representatives of the liberal camp (and for him as a whole).

At the same time, of course, the May decrees are far from being Putin’s only order, which has been ignored by the government. Now, for example, the Central Bank and the Ministry of Finance are successfully engaged in a strategic sabotage of creating a national payment system. But the fact is that the very topic of dedollarization and the consequences of sanctions will emerge again and again, and sweep the garbage under the carpet here will not work. And for this reason it is especially dangerous for liberastov.

There is one more circumstance. If the hypothesis that the Fed leadership believes that the new wave of financial crisis will begin no later than 2015 of the year is correct, then one of the most important tasks facing the US authorities is to prevent the creation of prerequisites for the implementation of regional financial centers to this moment.

In other words, the attack on Glazyev, which Kudrin initiated with his message, is in fact an important element in limiting the development of the ruble financial system.

As I have already written more than once, the main work on creating a ruble settlement system can be done in a few weeks - that is, theoretically, it could already act. Quite a lot today you can move forward to create a modern payment system, and there you can reach the issuing center. Especially considering that the world leaders in the development of payment systems are today Russian companies.

But this, as is clear, fundamentally contradicts the interests of the United States. Let me remind you that the entire global financial system is built in such a way that the cost of a loan is the lower, the closer the recipient is to the Fed (for this reason, a dollar loan is cheaper than a ruble loan), and this cost difference is the TAX that the US imposes on everyone who uses dollars . Well, or, to put it in an older language, this is a tribute Russia pays to financial baskakam.

And the plan of Glazyev is in a certain sense an attempt to hold the Kulikovo battle (or "standing on the Ugra"), at the end of which Russia will stop paying tribute to the Horde. It is clear that supporters of the financial Horde will face a wall against the implementation of such a proposal.

And I would suggest when discussing the position of Glazyev from this position and proceed!

Ctrl Enter
Noticed oshЫbku Highlight text and press. Ctrl + Enter
We are
What you didn't want to know about EnglandYou can not win - join
Military Reviewin Yandex News
Military Reviewin Google News
3 comments
Information
Dear reader, to leave comments on the publication, you must sign in.