Donuzlav sketches. In the wake of events 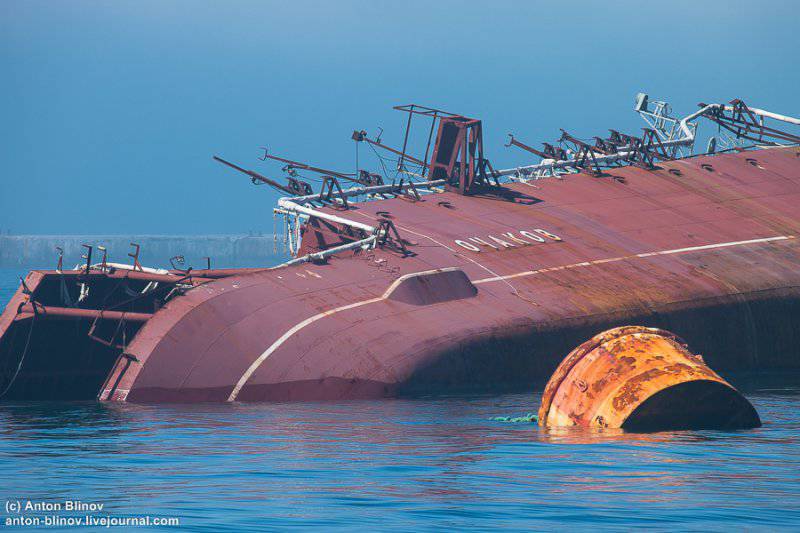 From Sevastopol to Donuzlav we headed early on the morning of March 23, on Sunday. The events there were in full swing - a part in Novoozernoye was already taken, but there were still three Ukrainian-flagged ships on the raid of the lake, determined not to give up. The plans were to first drive into the pier and capture the beautifully lying Ochakov, then move towards the Novoozerny and somewhere in those parts to see and shoot the remains of the Naval Forces on the roadstead.

Adjustments made the weather. Morning mist was strong and dense over Donuzlav, such that nothing was visible in 50 meters. “Ochakov” from the pier then only barely saw his stern, then disappeared completely in the shroud. Stood. Smoked. They waited for it to resolve.

But then, after a while ... At the entrance to the lake, around Ochakovo, a real war began, literally in 100 - 150 meters from us, which we very well heard, but because of the dense fog we did not see from the word "absolutely". The noise of the turbines on the right, from the lake. The noise on the left, from the sea. Several times - the wail of sirens, the hooters of cars from the opposite shore. Some kind of metallic sounds from the flooded Ochakovo. Screams and checkmate. From time to time, from the sea, when the mist dispersed a little, the silhouettes of a sea tug or a missile boat were visible. On a loud broadcast from the tug - “the crew is ready to repel an attack,” on a missile boat - “combat readiness number one” ...

Everything went on for about half an hour, then it was quiet. Subsequently, I learned that it was then, on Sunday morning, that the MTShch “Cherkasy” found a hole between the “Ochakov” and the flooded VM-Coy, tried to leak into it, but our tugboat was pushed back.

Well, after another half an hour, when, alas, it was all over, the fog slowly began to dissipate ...

2. General view of the ikebana at the entrance to the lake - "Ochakov" and one of the flooded VM-approx. 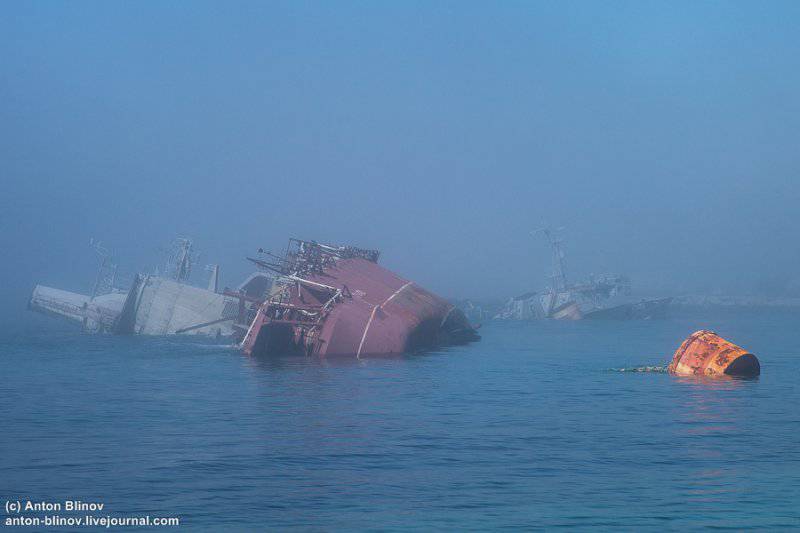 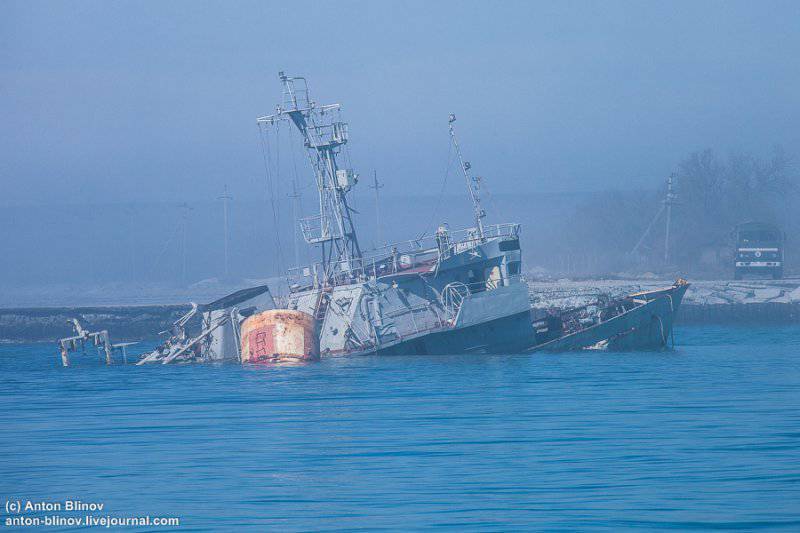 4. Views on Ochakov from different angles - to the right, from the bottom ... 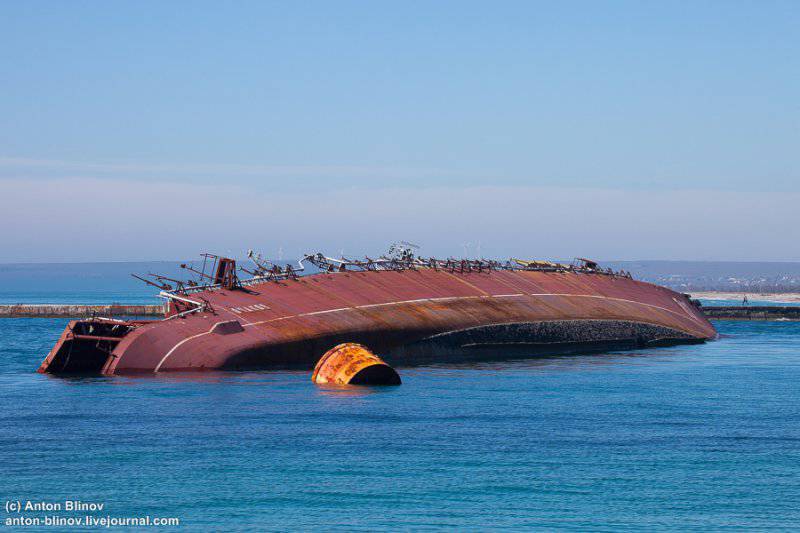 5. ... and to the left - from the side of the deck and superstructures. 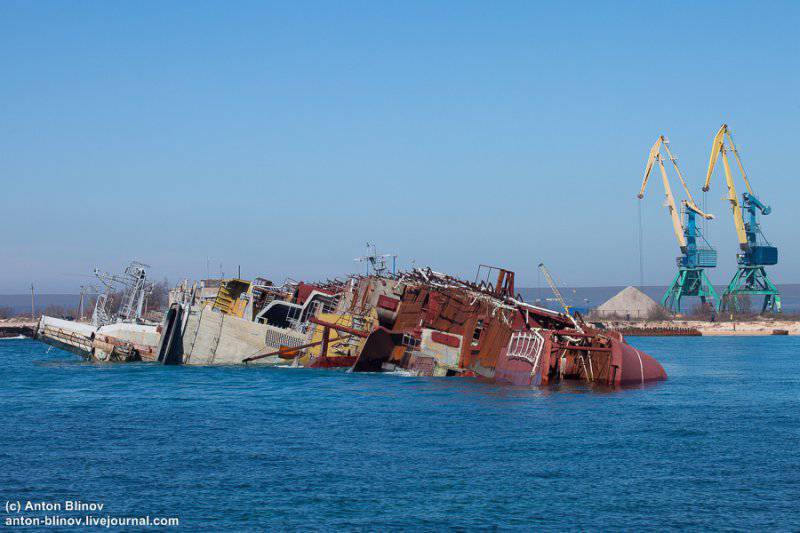 6. View towards the lake. Sea-sweeper "Cherkasy" (left), base-sweeper "Genichesk" (right). Somewhere on the horizon, "Konstantin Olshansky" was seen, but so far that it was not possible to take a clear picture of him.
Over the next couple of days they will be dealt with completely. 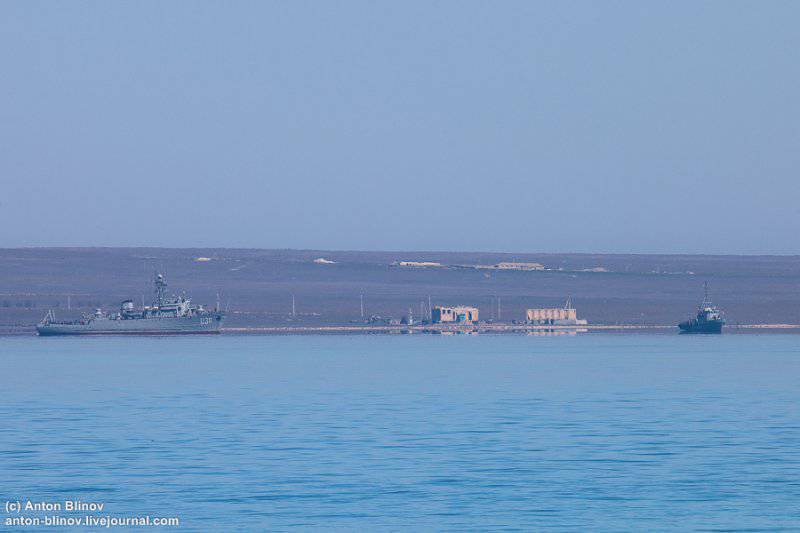 7. When the fog began to dissipate over the sea, it turned out that the tugboat and the missile boat were not alone :) TFR "Pytlivy". 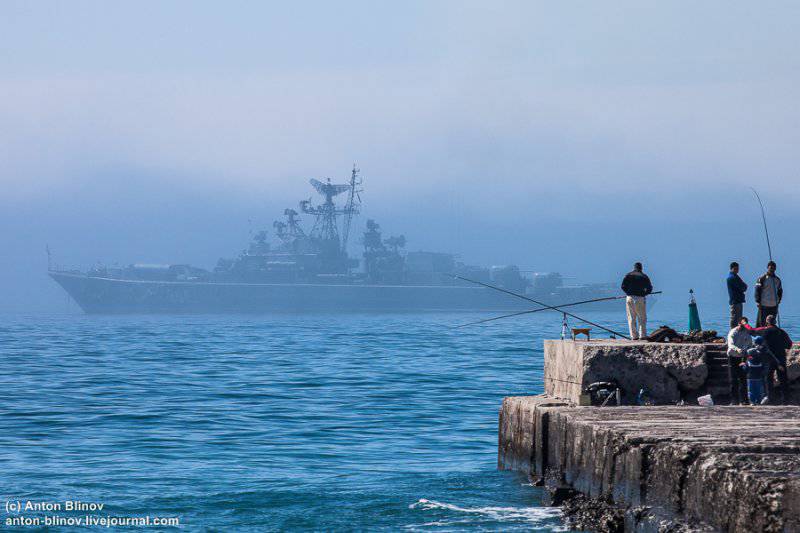 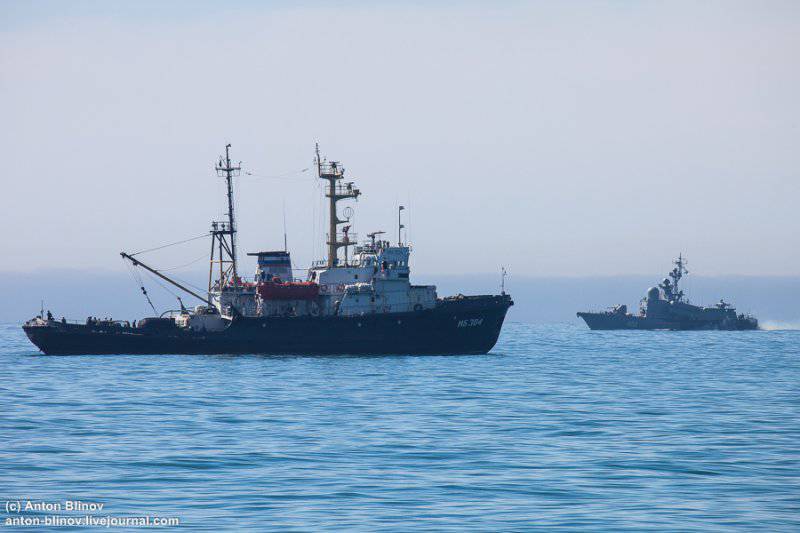 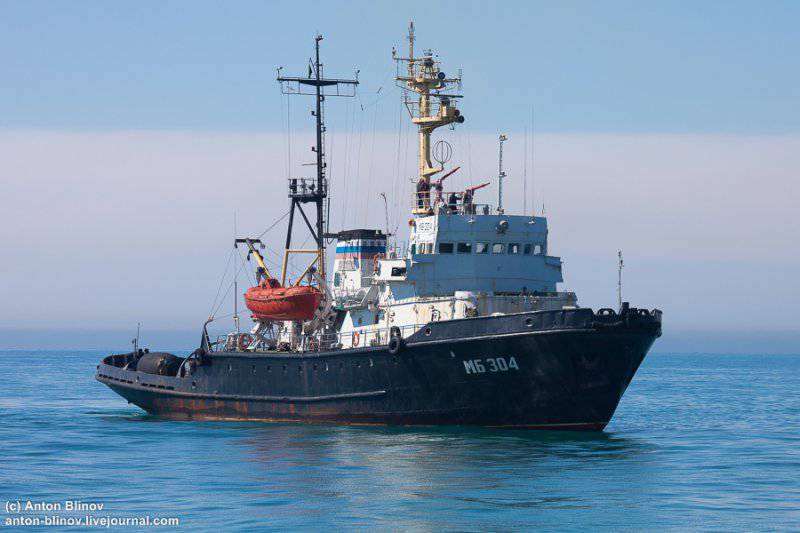 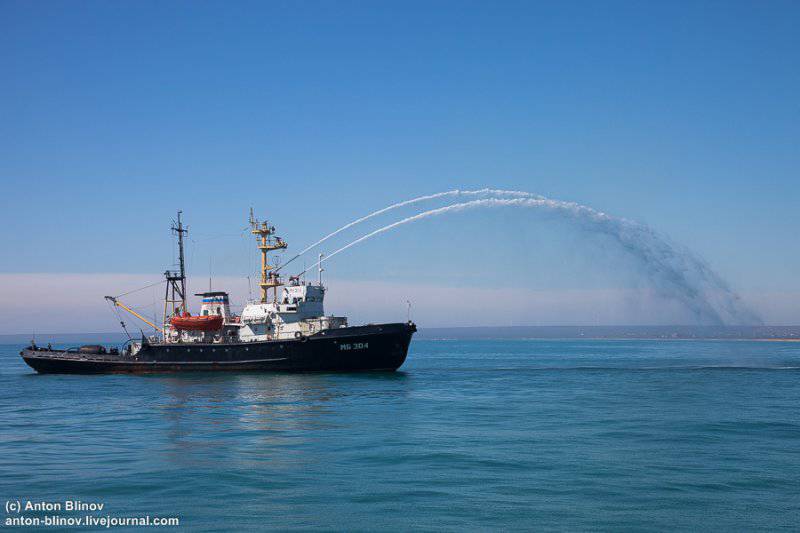 11. Also closer to the "Ochakov" and rocket boat pulls up. 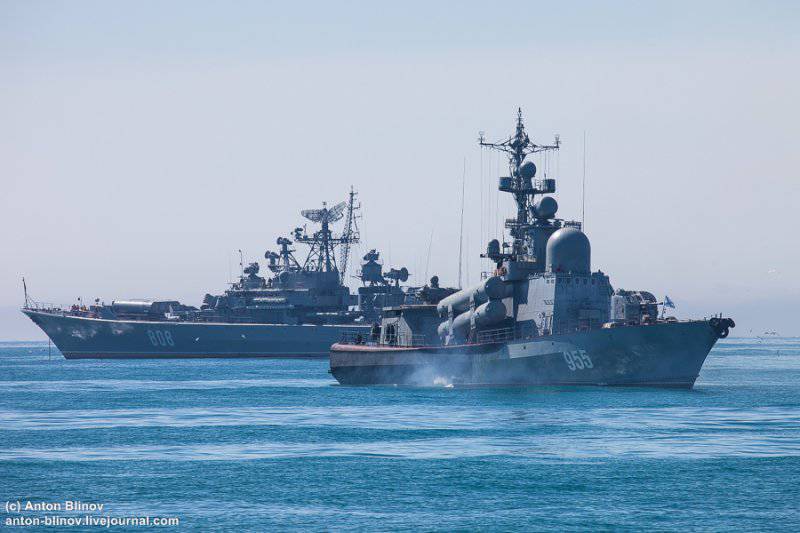 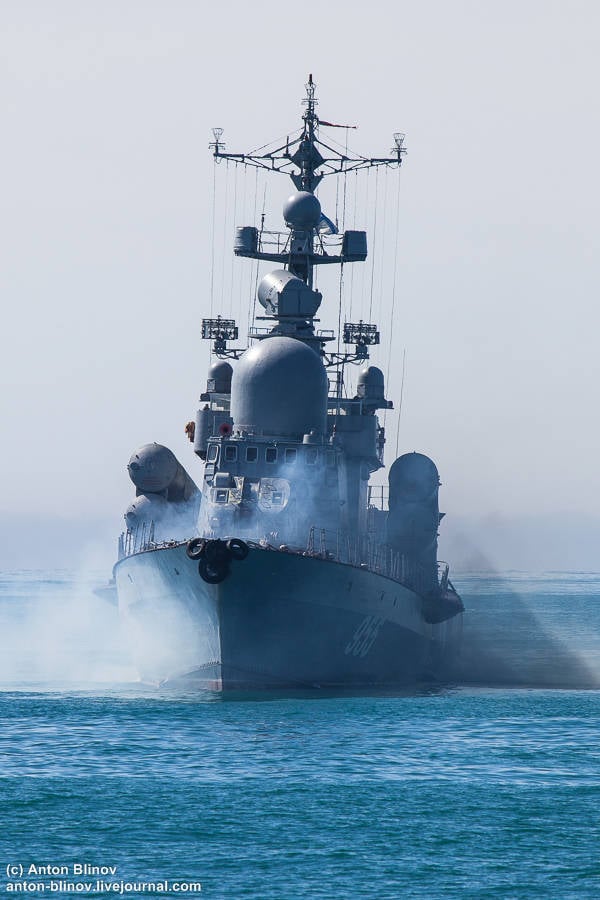 For the next hour, nothing more interesting happened. So we boarded the car and drove back to Sevastopol.

Ctrl Enter
Noticed oshЫbku Highlight text and press. Ctrl + Enter
We are
Liberation of Crimea and Sevastopol in 1944The 35 battery is a symbol of the deed and tragedy of Sevastopol
Military Reviewin Yandex News
Military Reviewin Google News
46 comments
Information
Dear reader, to leave comments on the publication, you must sign in.