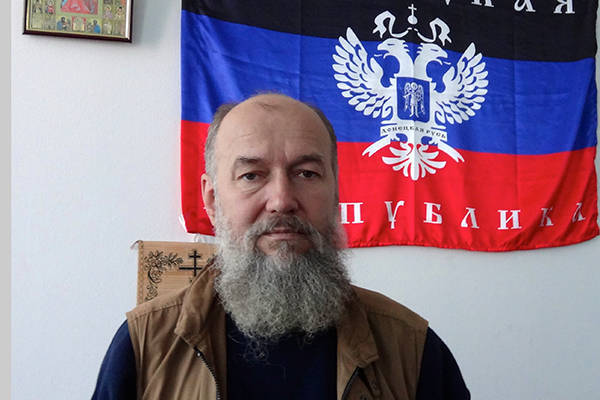 I caught the speaker of the Council of the Donetsk People's Republic, the co-chairman of the government, Vladimir Makovich, when he was in a hurry from the government meeting to the Council meeting. And yet he agreed to give an interview to Rossiyskaya Gazeta.

Vladimir Ivanovich, preparations for the referendum are in full swing. The CEC was created, funds were found, voter lists were printed. But the expression of will is impossible without the assistance of law enforcement. Which side is the police?

Vladimir Makovich: The militia from day one is practically everywhere with us. Its chiefs, in general, have already understood that they are in the territory of the Donetsk People's Republic and are obliged to do everything possible so that there is order and there is no criminal activity. Understand the duties of the police - to maintain order in crowded places. At the referendum will cluster. The militia together with our vigilantes will keep order. Squads are created everywhere. And no politics!

The referendum will be held, and then what? 12 May a new life begin? How will you build relationships with your neighbors? And above all with Ukraine, which does not recognize the referendum?

Makovich: Relations with neighbors already exist. Old Donetsk Republic is now the former Donetsk region of Ukraine. It can be assumed that Lugansk will follow us. Kharkov seeks us. These are communities that want to join the republic. We know about violent actions against nikolayevets, inhabitants of Odessa and Kherson. We have heard about the Rusins, who also demand their statehood. Any will of the people in the referendum will be treated with respect.

Donetsk Republic was declared another 7 April. Why another referendum?

Makovich: The act of proclaiming the republic was signed on April 7 and entered into force immediately after it was signed. But we hold a referendum to get an unequivocal answer that the people want.

What will happen to ties with Ukraine? This includes food supplies, coal purchases, and much more ...

Makovich: Nobody talks about a sharp cessation of economic ties. It is simply impossible. This comes pensions and subsidies. From here taxes and fees. While everything works. We did not block any program, so as not to harm. But if something happens, then surely there will be people who are ready to support us at this crucial stage. He loses only those who try to make this break.

Makovich: This will not happen immediately. Firstly, the counting of votes will take place and the results of the referendum will be announced. At the second stage, elections of prosecutors, heads of the Ministry of Internal Affairs, Security Service, courts will be held. This year we will ensure the election of all heads of law enforcement agencies. Then there will be new parliamentary elections. Then we will adopt the Constitution.

And the presidential election?

Makovich: Not ready to talk about the presidency. Perhaps we will have a parliamentary republic. There is no point in discussing this. The people will say their word!

Kiev says that mines are subsidized by the center. And what will you do if nobody will buy your coal?

Makovich: And you do not know? Miners recently wrote an open letter to their colleagues from Western Ukraine and Polish Silesia. There, the background of all the hype about these Kiev statements is very clearly drawn. The governments of Britain and Germany, in order to defuse social tensions, are discovering previously closed mines in their 40-60. And in order to clear the market for their expensive coal, they demand that Kiev close the mines in Silesia, Western Ukraine and the Donbas. There is such a letter. You can read.

What happens to private property in the Donbas?

Makovich: Everything will remain as it is. Except when there are court decisions on this.

And the mine Rinat Akhmetov?

Makovich: Irrelevant! Republican property will only be that which belongs to the state.

Ctrl Enter
Noticed oshЫbku Highlight text and press. Ctrl + Enter
We are
What you didn't want to know about EnglandLeonid Ivashov intends to continue to fight
Military Reviewin Yandex News
Military Reviewin Google News
64 comments
Information
Dear reader, to leave comments on the publication, you must sign in.