April 28 2014
145
One of the main Western henchmen in the so-called government of Ukraine, Arseniy Yatsenyuk, said under what conditions Ukraine will pay all its debts to Russia's Gazprom. Yatsenyuk said that Ukraine is ready to pay for gas at 268,5 dollars (for 1000 cubic meters), and will pay the 2,2 billion debt only if Russia signs new agreements with Ukraine, in which the specified price will be written. Reports the edition about it with the speaking title. "Ukrinform". 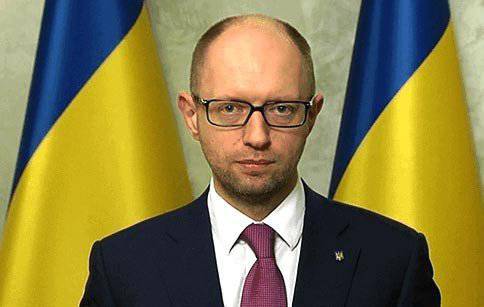 Arseniy Yatsenyuk made it clear that Russia can already consider this statement as an official business proposal, while he especially noted that NAK Naftogaz of Ukraine is filing a lawsuit against Gazprom. Reports about it RIA News". The business proposal on the background of the words about the lawsuit fits into the logic of the "partnership" of today's Kiev.

During 30 days, in accordance with the terms of the contract, the Russian monopolist should give a clear answer on the following questions. The first is the question of price.

“Business proposals” Yatsenyuk was commented on by his Facebook page on well-known political scientist Vitaly Tretyakov:

Yatsenyuk hopes that the court will allow Ukraine to receive gas from Russia for free?
Prime Minister of Ukraine Arseniy Yatsenyuk said that the Ukrainian government is going to sue Gazprom. In addition, speaking at a press conference, he invited the Russian side to meet on "neutral territory" in London and discuss all issues.
That is, Yatsenyuk hopes that the court (Stockholm or Kiev?) Will make the following verdict: Russia is obliged to supply Ukraine with gas for free, and if he refuses, he will pay fines for such ugly behavior. And this is all of Ukraine since 1991.

Arseniy Yatsenyuk - a member of “Batkivschyna”, in 2005 at 30-year-old took the post of Minister of Economy, in March 2007 - the post of Minister of Foreign Affairs, in December 2007 - post of Speaker of the Rada. 27 February 2014 with the active support of the West was put on the post of prime minister without the approval of the legitimate institutions of power in Ukraine.
Ctrl Enter
Noticed oshЫbku Highlight text and press. Ctrl + Enter
We are
Military Reviewin Yandex News
Military Reviewin Google News
145 comments
Information
Dear reader, to leave comments on the publication, you must sign in.