April 29 2014
46
Every day more and more details about the use of foreign mercenaries by Kiev pseudo-authorities in punitive operations in the south-east of Ukraine are coming out to the light of day. Sensational materials published newspaper "News", telling that the former head of security of the ex-president of Georgia Zviad Gamsakhurdia Gocha Bahia, who lives in Finland, is recruiting detachments to be sent to Ukraine. 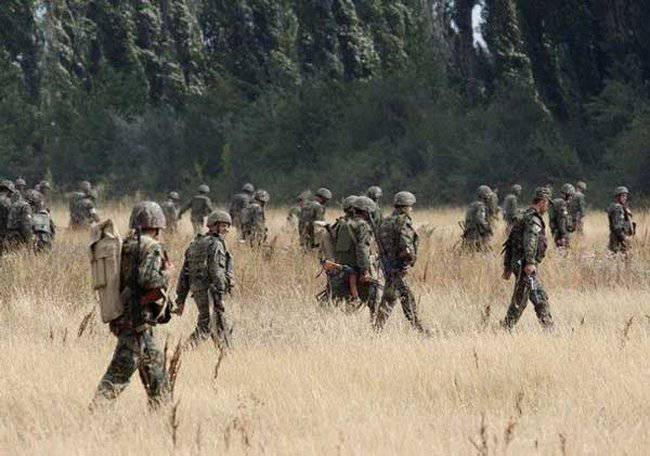 It is reported that one of the political forces organizing the financing process is the United National Movement - the party, founded in 2001, by Mikhail Saakashvili, and today being an opposition party in Georgia. Among the financiers are sending Georgian mercenaries to participate in operations against the self-defense forces of the south-east of the country and the NGO Free Zone. These organizations are not financing the mercenaries themselves, but receiving funds from the West. Coordinator actions, as well as actions to organize training for mercenaries, are performed by Gocha Bahia, recruiting “soldiers of fortune” - young Georgian citizens who want to earn good money and participate in the “war with Russia”.

Of course, this Izvestia material can be treated with a great deal of skepticism, but lately there has been a lot of evidence that certain Georgian citizens are showing increased activity where the term “Russia's interests” occurs. “Certain” citizens of Georgia are those who are in close contact with Mikhail Saakashvili.

Personnel with the Russian "oppositionists" who were promised generous funding for organizing mass protests and riots in Russian cities Givi Targamadze are familiar to many. It is familiar in Russia that Mr. Targamadze is very fond of not only meeting with Russian “dissenters”, but also arranging “gatherings” for them with representatives of the “progressive” West, determining the directions for further actions of the “oppositionists”, the current definition of which is 5- I am a column.

In the autumn of 2013, in one of his interviews, Saakashvili, who by that time had already left the presidential post in Georgia, opening his heart, suddenly said that he personally asked Mr. Targamadze to build bridges between the United National Movement of Georgia and the Russian "dissenters." Vilnius was chosen as one of the places for building such bridges.

Do not forget that Targamadze himself is a member of the “UNM”, and remains “in the cage” of Mikhail Saakashvili, who retrained in a lecturer in one of the American universities. Judging by the facts of visits to Saakashvili, the mayor of Kiev, it can be assumed that Saakashvili was in the United States not at all to give lectures to students there, but with the goal of receiving a CO from American tutors, hiding behind harmless pedagogical activities. To all appearances, Saakashvili’s CC receives a regular basis and is trying to work out Western funds invested in it at the peak of the Rose Revolution. And the best way to work out such means, as one might expect, to participate in coordinating actions in the direction of Western "support" to Georgia, so that the military specialists (as an option, mentioned by Izvestia Gocha Bahiya) could prepare a "soldier of fortune" for armed provocations and punitive operations .

The information that Georgian mercenaries are already operating on the territory of Ukraine was presented not so long ago by the ex-commander of the Avaza battalion Tristan Tsitelashvili. In an interview with the publication Gruzinform Tsitelashvili claims that he knows the personalities of the 4's Georgian snipers who acted on the Maidan in February. According to Tsitelashvili, Targamadze and Baramidze are involved in recruiting mercenaries from Georgia to Ukraine.

It is noteworthy that as early as last December, Baramidze told the press that Mikhail Saakashvili could arrive in Kiev. From this message almost 5 a month ago, it follows that Baramidze was and, there is an opinion, remains abreast of the plans that Saakashvili has been carrying out after consulting with the gentlemen who sheltered the ex-president of Georgia in the United States.
24 April in an interview "Today.ua" Baramidze, answering the publication’s question about the possible introduction of Russian troops into the territory of Ukraine, said:

Unfortunately, from Putin you can expect everything. But, as their actions both in Georgia and Ukraine showed, in the Russian Federation they never appreciate any gestures in order to solve the situation peacefully, so to speak. That is, Putin, when he sets himself a task, he tries to fulfill this task in any case.

But it becomes harder for him to accomplish this task if there is a corresponding confrontation. If not, it performs its task more easily. And if we do not oppose those illegal plans ... I do not mean the plans that he is building in Russia. I am talking about plans for our countries. If we do not confront these plans, then we will ease the task for him.

Therefore, the conclusion and morality from what we have learned after Abkhazia, South Ossetia and the Crimea is that it is better not to give him freedom of action. If we did not resist then, they would definitely reach Tbilisi.
So, Mr. Baramidze, who has the most direct connection to the “Single National Movement” (the project of the West in Georgia to achieve Western goals to transfer Georgia to Washington’s interests), openly declares that he is going to oppose “Putin’s plans”, while This mentioning the "resistance" five years ago. What kind of “resistance” we are talking about is well remembered: international specialists, after numerous inspections and investigations, established that Mikhail Saakashvili started the “resistance” in South Ossetia on 8 in August 2008, shooting civilians and Russian peacekeepers from salvo systems. What exactly did the then president "resist"? - to what the Kiev junta is now trying to “resist” —the desire of the regions to have their own opinion and fully defend it.

In Ukraine, thank you, it didn’t come to salvo-fire systems, but all the threads lead to the methods of the ex-president of Georgia, which is used by Washington for the dirtiest provocations in the post-Soviet space. The provocations are connected with one sole purpose - to bring the North Atlantic Alliance directly to the borders of Russia, so that at the right time you can take Russia “warm”, dragging it into pieces with the help of unreasoned representatives of the 5 column. Today, such a scenario (by the way, not for the first time) in the West fails. The West, to put it mildly, is angry, but it is trying to use its puppet in the form of the ex-president of Georgia to the "victorious end". But the whole trouble for the West is that all the “projects” to which Mikhail Nikolozovich is involved, it quickly becomes known ... Why should it be? ..

By the way, on Monday 28 of April, Saakashvili in Azerbaijan met with President Ilham Aliyev. Reports about it official website of the Azerbaijani President. In addition, Aliyev held a meeting with the former President of Ukraine Viktor Yushchenko. Proceeding from all the exploits of these ex-heads of their states, Ilham Aliyev would definitely need to be more careful during such meetings and conversations ...

Ctrl Enter
Noticed oshЫbku Highlight text and press. Ctrl + Enter
We are
Paradoxes of Georgia, or the Red Card to Mikhail Saakashvili from the Georgian peopleSaakashvili leaked, or Bog for Bidziny
Military Reviewin Yandex News
Military Reviewin Google News
46 comments
Information
Dear reader, to leave comments on the publication, you must sign in.