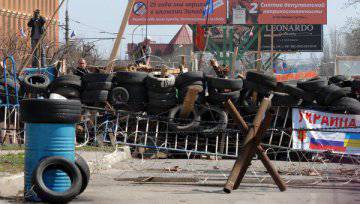 As the RIA News", at a meeting in Lugansk was read a document on the creation of "Lugansk People's Republic".


"The congress of representatives of territorial communities, political parties and public organizations of the Luhansk region proclaims the creation of a sovereign state" Luhansk People's Republic, "reads the document read by the coordinators of the" people's council of the Luhansk region. "

As noted by the city site Lugansk 0642.com.ua, the Lugansk militia put forward an ultimatum to the Ukrainian authorities, promising to move to action if their demands are not met.

“Our demands were simple and ordinary - amnesty to all political prisoners, a referendum, the abolition of price increases and tariffs, the Russian language. These elementary requirements are understandable for the government of any civilized country, ”the statement says.

According to the militia, the agreements concluded in Geneva, obliged the Ukrainian authorities to announce an amnesty to the participants of the protests and listen to the south-eastern regions of the country.

"If until 14 hours (15.00 Moscow time) on Tuesday, 29 April, all our requirements, supported by the Geneva agreements, are not met, we consider all the authorities that are in Kiev, anti-people and criminal, and proceed to active actions," message.

Ctrl Enter
Noticed oshЫbku Highlight text and press. Ctrl + Enter
We are
Reports from the militia of New Russia for 27-28 September 2014 of the year
Military Reviewin Yandex News
Military Reviewin Google News
57 comments
Information
Dear reader, to leave comments on the publication, you must sign in.