Alexander Gaponenko: “NATO in the Baltic States is a bludgeon for local Russians” 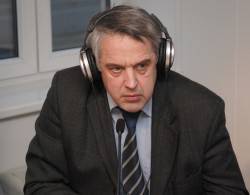 
- The entry of the Baltic states into the EU and NATO was accompanied by great pomp and was given off almost as a trip into paradise even during life. And what is the situation with the Russian inhabitants of Latvia, Lithuania and Estonia today, in fact, has their situation improved?

- Latvia did not join the EU and NATO in order to improve the position of Latvians, including Russians, but fulfilling the wishes of their Western curators. For the West, Latvia is a market for industrial products, a supplier of cheap and skilled labor, a source of wood and peat, and agricultural products. The lands and forests in the country now belong to two thirds of the Scandinavians. Foreigners bought real estate in Riga and Jurmala. The once numerous Latvian banks were also bought by the Scandinavians and, as a phenomenon, have already disappeared. To serve retirees from Scandinavia, a decent tourism industry has been established in Riga. Jobs in the country fell by a third after the crisis, and hence the mass emigration of the population to the UK and Ireland. The EU’s leadership prefers to turn a blind eye to the ethnic discrimination of Russians in Latvia, as well as to the existence of an institution of mass statelessness.

- Is it possible to expect, in your opinion, an end to the discriminatory policy towards the Russian population while NATO troops are here?

- NATO actually in the Baltic countries plays the role of a baton, which the ruling elite regularly threatens with the Russians. During the exercises, this organization works out actions for the landing of troops in areas of ethnic conflict, preparing, according to a number of authoritative military experts, to isolate Russian activists in the event of any threats. And now, from the lips of politicians, there are assurances that the Latvian army is preparing to perform the same functions as the militarized formations of the self-proclaimed Kiev authorities in the Donetsk Republic. What these bandit formations are doing there, we know - they are firing at civilians.

- How, in your opinion, will the Russian population of the Baltic States respond to the additional deployment of NATO troops in these countries, against the backdrop of aggressive anti-Russian and Russophobic rhetoric, coming from NATO headquarters? Especially if the deployment of the new military bases of the United States and NATO will take place in areas densely populated by Russians?

- The Russians are already opposing even the temporary deployment of a NATO military contingent in Latvia. Dissatisfied with these plans and part of the Latvians. However, the authorities have launched a campaign in the media to intimidate Latvians with the fact that the Russians are the “fifth column”, hinting that they should not join their anti-war appeals, since they are really aimed at covering the Russian occupation. The scale of provocative anti-Russian publications in the media is terrifying. I see behind all this the purposeful activity of the ruling Latvian elite, which wants to unleash a civil war in the country, to make Latvians forget about their theft, corruption, betrayal of the interests of their people.

- Where does the main vector of anti-Russian and Russophobic policies in the Baltic countries come from - from a simple Latvian, Lithuanian, Estonian or from the ruling bureaucracy and their patrons from Washington?

- In Latvia, the main source of anti-Russian and anti-Russian threats is the ruling Unity party. Before the elections, she decided to take extreme national-radical positions and now intimidates ordinary Latvians. She surpassed even the National Socialist Party "All Latvia". What are the legislative initiatives of "Unity": the adoption of a racist preamble to the constitution, a law on criminal liability for assessments historical events. This party began to carry out the assimilation reform of Russian schools. By the way, the actions of Unity became so odious that even the Americans began to refuse the party. For example, they resigned Prime Minister V. Dombrovskis, removed the ardent Russophobe A. Pabriks from the post of Defense Minister. Now they are looking for another political force that they could rely on. The United States is not going to start a third world war with Russia because of inadequate Latvian national-radicals. Lithuania and Estonia have their own parties similar to "Unity", controlled by Washington.

- Official Latvia condemned the entry of Crimea into Russia, and what kind of reaction was noted to this event in the Russian community of Latvia?

- The main part of the Latvian Russians supported the process of reunification of the Crimea with Russia. Two meetings were held at the Russian embassy in support of this decision.

Recently, a public discussion on the issue of the reunification of the divided Russian nation in Latvia has just begun. Video debates on this issue have already been held within the framework of the “Russian Discussion Club”, it is planned to hold public events and diverse actions.

Ctrl Enter
Noticed oshЫbku Highlight text and press. Ctrl + Enter
We are
List of destroyed the largest and most high-tech enterprisesHow Latvia pragmatically and constructively cooperates with Russia
Military Reviewin Yandex News
Military Reviewin Google News
35 comments
Information
Dear reader, to leave comments on the publication, you must sign in.