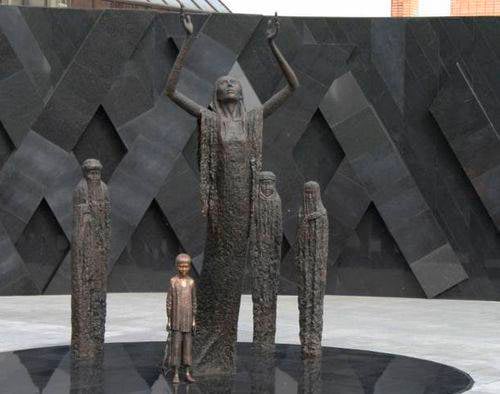 While the main attention of the public is focused on events in Ukraine and around it, in the meantime, interesting processes are also taking place in Europe. As an example: just recently, the daily German newspaper Die Welt published an article by Sven Kellerhof “The Stalin Holodomor cost the lives of one and a half million Kazakhs”.

The article praises the dissertation of a German specialist in stories Eastern European Robert Kindler "Stalin nomads." The material is designed in the spirit of the most brutal anti-Sovietism.

The question may arise: what is new in this? In general, nothing else, and quite another is interesting: the topic of the Kazakh “famine” that is little known to the West for now, is obviously becoming one of the percussive in European politics, which is reflected in the media.

A few years ago, the number of publications on the history of famine in Kazakhstan could be counted on the fingers. This topic was on the far periphery of the attention of historians and politicians and was barely touched on even within the framework of the well-known disputes about the Ukrainian “famine”. Now the situation is changing, and obviously not without purpose.

Recall that the “Holodomor” topic, raised during the reign of President L. Kuchma and which became one of the main areas of domestic and foreign policy under President Yushchenko, split the Ukrainian society, opened the way for nationalists to enter into big politics and, in fact, also set the stage for the current coup d'état.

In many publications of the “hunger strikers,” it was clear that they did not want to deal with the true causes of the famine, all the “arrows” were transferred to Moscow, to Russia and to the Russians - the image of “man-made hunger” was molded together.
We see the same picture in today's Kazakhstan. The German historian took the position of the most extreme Kazakh nationalists and also began to accuse Moscow, Russia and Russians. Of course, not so frankly, as the Kazakh "national-patriots" do, but the tendency, as they say, lies on the surface. Is this the intention to repeat the Ukrainian script in Kazakhstan?

Several years ago I wrote a book dedicated to the famine in Kazakhstan. I collected all the publications available to me and, paying particular attention to the reports of those terrible years, analyzed the reasons for the famine from an economic point of view. I was interested in how the leadership of KazASSR and Kazkraykom managed to bring the people to such a large-scale tragedy. The nomadic Kazakh economy was then quite stable, it every 10-12 years overcame jute devastating for livestock - winter warming, when snow is covered with hard crust and animals cannot dig up grass from under the snow. In all the famous written history relating to the nomads in the territory of modern Kazakhstan, never talked about the famine of comparable scale.

The conclusions contradicted what the Kazakh "national fats" said about the famine. Hunger was the result of a series of economic mistakes made by the leadership of KazASSR. Not even a sign was found, not to mention the facts that hunger was planned by someone. Moreover, until the fall of 1932, Kazkraykom and his first secretary, Philip (Isay) Goloshchekin, were unaware of the true extent of the famine, and ignored requests for help from the localities, considering them to be manifestations of panic.

It took a split of the Kazkraykom and the denunciation of the chairman of the SNK of the Kazakh Autonomous Soviet Socialist Republic of Uraz Isayev to Goloshchekin, handed over to Stalin personally. Isaev outlined the real situation, acknowledged his own guilt and offered to remove Goloshchekin from his post. A month later, 17 of September of 1932, Stalin gave the answer: to allocate food aid to the population, to exempt it from taxes and harvesting for two years, to allow personal ownership of livestock in the amount of an average nomadic economy. Soon and Goloschekin, a famous revolutionary, by the way, one of the organizers of the regicide, left Kazakhstan ...

Due to the discrepancy between the findings of the study and the official views of the Kazakh "national fats", they refused to publish my book in Kazakhstan.
However, based on the collected material, it is possible and, I am sure, to critically examine the main points of the thesis of Robert Kindler in the statement of the newspaper Die Welt. Firstly, it’s absurd to talk about the unlimited power of Stalin and anyone else in Kazakhstan for the simple reason that there was simply no permanent connection with rural areas. The ombudspersons were cut off from the central leadership, and each leader did what he was in.

In addition, in 1930 in Kazakhstan, the Russian language was not as ubiquitous as it is now. The top management spoke in Russian, and the grassroots in Kazakh. All instructions were translated from Russian into Kazakh with such distortions that it was impossible to understand their meaning. The party journalist of the time, Gabbas Togzhanov, wrote: “We could give here a few“ translations ”that we have, but with all our desire we cannot bring them here, because, despite the fact that these“ translations ”were made from the Russian text, we we can translate them back into Russian. ” The actual lack of control and instructions that can not be understood - what else is needed for kinks in the field?

Secondly, the German specialist believes: "The indigenous people of Kazakhstan led mainly the nomadic way of life and constantly wandered through the boundless steppes." On the contrary, the Kazakh nomadic economy was very orderly, with carefully thought-out routes between winter and summer pastures, between wells and watering places, with detailed rights who and where has the right to feed and water the livestock. The Kazakh nomad camp was so well organized that the experts of this system could at any moment tell where a particular kind of Kazakh tribe was located. Just wander the steppe meant to destroy the cattle. For the same reason, nomads from the Ili and Irtysh border regions migrated mainly to Xinjiang or Kyrgyzstan, from the Syr Darya to Uzbekistan and Turkmenistan, from the northern regions to the Urals, to Siberia and to Kuzbass.

Thirdly, the statement “Like in Ukraine, in Kazakhstan the goal of Soviet collectivization was the radical destruction of the old structures and the establishment of the absolute power of the communist functionaries on their ruins” is absolutely not true.
The goal of collectivization was the creation of commodity farms capable of not only feeding the members of this farm, but also supplying products to the cities. What is said in all the plans and materials on collectivization, but the German expert chose not to notice this at all.

Fourthly, for a German researcher, the figures on the state of livestock do not correspond at all to the data from the primary sources. So, Robert Kindler writes that in 1929, in Kazakhstan there were about 36 million cattle, while the Goloshchekin report shows 40,3 million heads. “After four years of collectivization in Kazakhstan, almost 90% of cattle were destroyed or exported from its territory: now there are a little more than 1,6 million cows and 2,15 million sheep and goats left.” In general, according to the German, it was 3,75 million goals. In fact, in 1933, in Kazakhstan there were 4,5 million livestock heads. In the 1934 year - 5,9 million heads.

It is well known that the distortion of statistics is an old method of both once ardent anti-Sovietists, and of all Russophobes today. But, most importantly, a German expert could not explain why there was such a sharp decline in livestock numbers.
According to him, everything is simple: “The shepherds who did not fulfill the tasks of handing over grain were arrested, and their cattle were confiscated. During the shortest time, giant herds appeared throughout Kazakhstan, which could be neither fed nor maintained. ” Nonsense, and only!

By a strange coincidence, the German scientist, following the Kazakh “national factions,” did not indicate that Kazakhstan had vast grain areas and one of the most important moments of the collectivization plan was precisely the creation of large grain farms. The problem was that the growth of plowing from 3 million hectares to 26 million was completely beyond the power of either the Kazakh Autonomous Soviet Socialist Republic or the entire Soviet Union. For such a large-scale plowing, the entire tractor fleet in the USSR would not be enough. Such capacities were achieved only after 20 years. But Kazakhstan is still plowing and sowing according to the recipes of the times of collectivization — large grain farms, sowing about 17-18 million hectares per year.

Further, in the Kazakh Autonomous Soviet Socialist Republic were going to create livestock farms - large farms of the European type, which gave the best land and pastures and for which they gathered cattle from nomads. They wanted to make it so that there was a lot of meat and milk, but it did not work out. And now attempts to create large livestock farms in Kazakhstan almost always fail. Climate and conditions are not suitable for European-type animal husbandry.

At the same time, before the collectivization, the Kazakh nomads gradually shifted to settled livestock, made arable land and hayfields. In the Altai, the Kazakhs, under the influence of the Russians, became completely sedentary. Goloschekin made a fatal mistake when he forced this process without a prepared infrastructure: wells, feed facilities, housing and outbuildings. It is precisely this administrative attachment of Kazakh households to the “points of subsidence” that became the decisive cause of the famine. Slaughter from starvation amounted to 47% loss of livestock, or about 17 million heads. For comparison, the delivery of livestock in order of meat and livestock sales had 5,2 million heads. The German specialist turned everything upside down.

What conclusions can be made? Kazakhstan could survive the collectivization, if it were done without haste, pressure and in relation to economic opportunities. The fact that now Kazakhstan is a major grain producer, just confirms that there was rational content in terms of collectivization. Hunger was caused by the collapse of agriculture, which occurred due to management mistakes, but there was no “organized famine” there.

However, now in Kazakhstan there are attempts to transfer all responsibility for the mass hunger to Russians, and to present the Kazakhs as the only victims. In fact, all the peoples who lived then in the Kazakh Autonomous Soviet Socialist Republic suffered significant losses from hunger. The economic disaster did not spare anyone: neither a Kazakh, nor a Russian, nor a Ukrainian, nor a Uighur.

Unlike Ukraine, where hunger affected only a part of the population, albeit significant, in Kazakhstan the topic of hunger concerns almost every Kazakh. This is a very sharp, painful memory, and the politicization of hunger problems can lead to the most devastating consequences.

For example, to aggravate and bring to the internal clashes the already divided Kazakh society - with the lines of demarcation on “nagyz” (real) and “shal” (half) Kazakhs, on urban and rural, on Kazakh-speaking and Russian-speaking.

The hunger theme can revive tribalism, which in the western regions will become a burning match thrown in a barrel of gasoline. The descendants of the survivors may recall the descendants of the activists - belsendy (these were mainly Kazakhs), the participation of some ancestors in the death of others. And this is without taking into account the difficult inter-ethnic relations.

Hunger, of course, must be remembered as a brutal lesson of economic disaster, so as not to repeat this again. And the politicization of this topic can lead to great upheavals.

Ctrl Enter
Noticed oshЫbku Highlight text and press. Ctrl + Enter
We are
Why not all Russians will leave Kazakhstan?Kazakh secret of survival. Historical lessons
Military Reviewin Yandex News
Military Reviewin Google News
235 comments
Information
Dear reader, to leave comments on the publication, you must sign in.