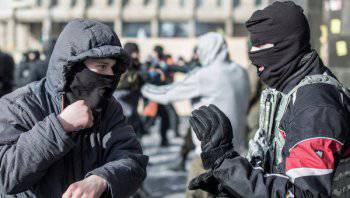 According to the RIA News", 24 April, activists of the Right Sector movement blocked the building of the district administration in the city of Kolomyia in Ivano-Frankivsk region. As noted by the local edition "Kolomyyskie news", thus they protested against the appointment of the new chairman of the district state administration, Mikhail Boyko.


In the afternoon, Kolomyya was visited by the chairman of the regional state administration Andrei Trotsenko, who was going to introduce a new leader, but the picketers did not let the regional authorities into the building. The community of the region and the deputies had to take the room by storm.

It is worth noting that the chairman of the Batkivshchyna faction, Mikhail Boyko, was appointed the new head of the RGA instead of Mikhail Negrich.

Ctrl Enter
Noticed oshЫbku Highlight text and press. Ctrl + Enter
We are
In the Ivano-Frankivsk region appeared militiaRogozin visited Nizhny Tagil, shot from a tank and a gun
Military Reviewin Yandex News
Military Reviewin Google News
75 comments
Information
Dear reader, to leave comments on the publication, you must sign in.