Nikolai Nikiforov: “The model for managing the Internet infrastructure should be multilateral 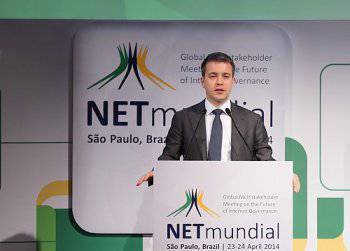 Sao Paulo (Brazil), April 23 2014 of the year. - The Russian delegation led by the Minister of Communications and Mass Media Nikolai Nikiforov took part in the global conference on the management of the Internet infrastructure NETmundial-2014. The event was opened by the President of the Federative Republic of Brazil, Dilma Rousseff. The head of the Ministry of Communications and Mass Media of Russia voiced the position of the Russian Federation and proposed the creation or authorization within the framework of the United Nations (UN) a separate structure for the development of international legal norms on the management of Internet infrastructure.


Now the Internet is regulated by the international non-profit organization Internet Corporation for Assigned Names and Numbers (ICAAN) created with the participation of the US government in terms of domain names, IP addresses and other mechanisms. However, in the 2013-2014 years of the global public, previously unknown facts became known about the working methods of the intelligence structures of a number of countries, about the practice of mass collection and storage of personal data of citizens. All this revealed the vulnerability of the global network and demonstrated that the privacy of each user can be under the scrutiny of a certain circle of people.

In this regard, the head of the Ministry of Communications and Mass Media of Russia stated the need for the equal participation of all states in managing the Internet infrastructure and preventing the situation of massive violation of human rights and fundamental freedoms.

The following is the speech of the Minister of Communications and Mass Communications of the Russian Federation Nikolai Nikiforov on NETmundial-2014, which was held in Sao Paulo (Brazil).

Let me express my gratitude to the Government of the Federative Republic of Brazil for organizing the event.

I also want to greet all the participants of today's meeting. It is devoted to an exceptionally important topic - the discussion of the issue of improving the current model of managing the Internet infrastructure, which, in our opinion, is experiencing a serious crisis.

I note that this issue can be effectively addressed only with close international cooperation and with the leading role of states.

It is obvious that today the world community needs immediate, coordinated and effective actions aimed at improving the current model of managing the Internet infrastructure.

I would like to note that the state considers civil society as an important partner and ally in building a balanced, safe and respecting human rights Internet ecosystem. In recent years, many forms and methods of such cooperation have been tested and have yielded good results.
We share the view that the Internet infrastructure management model should be multistakeholder. This understanding was reflected in a joint statement by the G8 heads of state in Deauville in 2011.

However, in our opinion, it is necessary to clearly define the roles of all stakeholders in this process, including states. After all, states are subjects of international law, they are the guarantor of the rights and freedoms of their citizens, play a major role in matters of economics, security and stability of the Internet information infrastructure, take measures to prevent, detect and prevent illegal actions in the global network.

The participation of states in the sphere of their authority in the decision-making process on the management of Internet infrastructure will solve the following problems:

- the use of the Internet for the purpose of mass violation of human rights and fundamental freedoms, which contradicts both national law and international law, and also undermines people's trust in the global network;

- the lack of balance between ensuring security on the Internet and respecting human rights;

- the lack of a single center for the development of intergovernmental policies and international standards for the proper management of the Internet infrastructure.

The Russian Federation proceeds from the understanding that the Internet must remain open, a transnational resource endowed with a fair and truly international infrastructure management mechanism capable of generating confidence, confidence and equal opportunities for economic development.

I don’t deny that we are concerned about the low level of coordination of international, regional and national efforts to manage the Internet infrastructure.

Some issues of Internet infrastructure management are divided between different organizations and their solution is poorly coordinated. For example, the Internet Governance Governance Forum (IGF) is not the responsible authority for formulating and adopting a global policy on Internet infrastructure management. And in its format can not be endowed with such powers. ICANN does not have an internationally agreed mandate to support its activities, its functions are to manage only the critical resources of the Internet.

In addition, ICANN is not an international governmental organization with a global representation of countries, which does not automatically comply with the principle of equality of states in relation to the management of Internet infrastructure.

I note that the Russian contribution to the organizers of the Global Meeting reflected the legal, political, institutional and technical issues that citizens of our countries, our public face, and also made specific proposals for creating a new Internet infrastructure management model that meets the interests of most states.

In the final documents of the Global Meeting, it is necessary to emphasize the role of states in the process of managing Internet infrastructure, to confirm the rights of states to determine and conduct public policy, including international, on managing Internet infrastructure, ensure the security of the national segment of the Internet, and regulate activities operating organizations that provide access to the Internet or pass Internet traffic.

Without the inclusion of these basic, fundamental principles, the document will have no added value.

At this stage, we do not see opportunities to reach a consensus between different approaches to the issue of Internet infrastructure management. This was shown by the draft final documents circulated by the organizers of the event, in which many provisions actually contradict each other. In this regard, as a compromise, we propose to formalize the results of the meeting in the form of a report by its chairman.

In conclusion, I would like to stress once again that we will continue to pursue a policy of strengthening international cooperation in the field of Internet infrastructure management. I have no doubt that it will always be constructive. And the contribution of Russia in this area is significant. ”

Ctrl Enter
Noticed oshЫbku Highlight text and press. Ctrl + Enter
We are
Nikolay Nikiforov: “The Ministry is actively involved in the development of a system approach for informatization of defense enterprises”List of CIA-funded Russian public organizations
Military Reviewin Yandex News
Military Reviewin Google News
5 comments
Information
Dear reader, to leave comments on the publication, you must to register.