4 May 2011
3
Hundreds of thousands of heroes have made an invaluable contribution to the liberation of our Motherland and the whole world from the fascist yoke. The names of some remained unknown. But there were those whose names were left for stories. One of these heroes is Matvey Kuzmin. He was not among the rank-and-file soldiers according to his age. But, nevertheless, he contributed to the victory.

In February, the 1942 of the year, the German mountain-rifle division was to break through the front and advance to the rear of the Red Army in the area between Leningrad and Pskov. This was a difficult task for the German command due to the lack of clear guidelines and maps of the area, because of the difficult forests. In addition, the brutal thirty-degree frosts hampered the movement, in such frosts it was difficult not only for soldiers, but also for equipment. The success of this operation, some of the military leaders of the German army questioned. It is necessary to walk about six kilometers through difficult terrain and go to the village Pershino. This small, long-lasting march to the Germans at that time could have been completed in two hours, provided that they went straight. 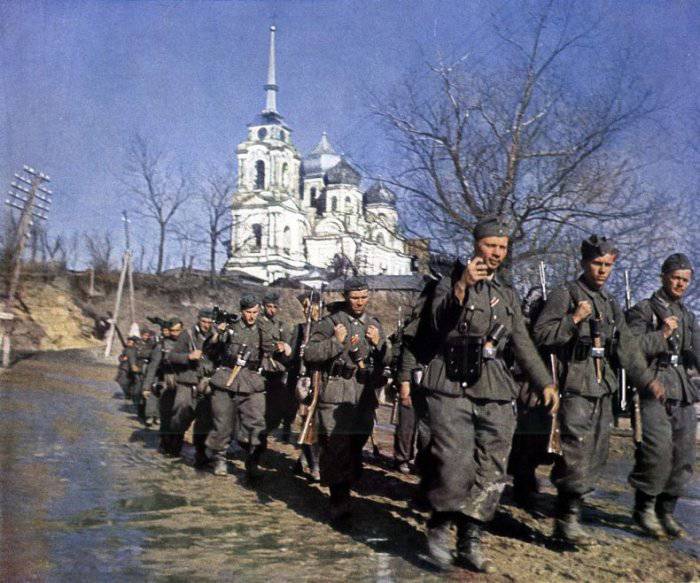 The commander of the German column decided to take with him a guide from those who lived in the area. As a conductor, he chose the owner of the hut, in which the headquarters of the German battalion was based. One night the captain, the officer of the battalion, told Matthew Kuzmich that he should take them on the shortest route, for which he would be encouraged by money. After some deliberation, Matvey Kuzmin agreed. If that German officer knew what the old collective farmer Matvey had planned, what he had prepared for the German invaders.

When it was an opportune moment, grandfather Matvey whispered a few words to his grandson Vanya, he immediately gathered, left the hut, put on his skis and rushed into the woods. After some time, a German battalion led by a commanding officer left the collective farm village. Matvey Kuzmin walked in front of the column. The German battalion, equipped with full equipment, moved to the intended target instead of the two hours set for several hours. From such a forced march, the soldiers of the German battalion were clearly exhausted. Grandfather Matvey did not lead them on the direct road, as he had promised, but, having misled them, led the German soldiers in roundabout ways. Instead of six kilometers, it was necessary to walk about twenty-five kilometers.

At the edge of the forest, the fascist invaders were able to get out only in the morning. Exhausted by the night transition, German soldiers almost fell off their feet. But they did not come to the village of Pershino at all, as they had been appointed. Their grandfather Matvey led them to the village of Malkino, where an ambush was waiting for them. In the evening, the soldiers of the 31-th separate rifle brigade of Colonel Gorbunov were ready for the meeting of the German battalion of the mountain rifle division. Grandfather knew where to lead the Nazis. He led them to the ambush site, he believed that his grandson Vanechka would have time before dawn to get to the soldiers of our division, and told him in advance where to ambush.

Leaving on the edge of the forest, the German soldiers, led by an officer, stopped for a moment to take a breath. The silence in the forest was absolute, nothing boldly break the morning silence of the forest. But the silence suddenly broke the crash of Soviet machine guns and machine guns. Shocked by the soldiers of the German battalion, shackled by fatigue and fear at night, they were not even able to figure out what had happened, not to give any kind of rebuff. In the first seconds of the start of the shelling, several dozen Germans were killed. Some of the survivors decided to turn back into the forest under the shelter of the trees. A machine-gun fire from the flanks blocked their path.

Only about one and a half hundred fascist soldiers fell into the snow near that forest. About twenty Germans immediately tried to surrender. The rest, who did not have time to give up and tried to make an attempt to fight back, could not survive. All of them mowed down machine-gun fire. The scuttling Germans were overtaken by the Soviet soldiers, finishing off with a butt and a bayonet. Among them ran and Vanya, trying to find his grandfather. The fighters of the brigade in a few minutes found the body of his grandfather Matthew, who gave his life in order to deprive uninvited guests of life. After the shelling began, the commander of the German battalion realized that grandfather Matvey had led his soldiers to a dead end, and shot him from his browning. But then he himself was struck down by a long machine-gun burst sent to him by the Soviet shooter.

Pskov's “Ivan Susanin”, that’s what they called Matvey Kuzmin, was posthumously awarded the Star of Hero of the Soviet Union in May 1965 for his feat. He became the oldest of those Soviet heroes who were awarded such a high state award. And hundreds more of these “Ivanov Susanins” opposed the domination of the fascist evil in the territory of the Soviet Motherland.