April 24 2014
22
Russia and Western countries have an objective criterion for assessing the military activities of states.


April 9 The annual Days of Science, a set of events dedicated to modern aspects of international security this year, was opened with the assistance of the Center for Military-Political Studies of MGIMO. Among others, the Deputy Minister of Defense of the Russian Federation Anatoly Antonov spoke at the opening with a report “Actual problems of international and regional security”. We publish theses of the sounded speech.

There are major changes in world politics. There is a new balance of power, changing the nature of threats and challenges to security. Of course, the forms and methods of countering them are changing.

Despite numerous efforts after the Cold War, issues of trust, openness, predictability, reduction of military and political tensions remain in the focus of attention of politicians and military. Worried about the increasing instability and conflict potential in world affairs. 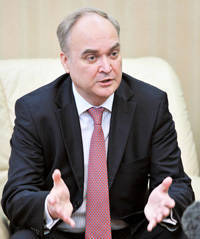 The struggle for access to raw materials, energy, scientific and technological resources and sales markets is intensifying. Leadership in the information sphere is becoming a prerequisite for political and military superiority.

A new phenomenon of international life - “color revolutions”, which lead to negative military, political and economic consequences in various regions of the world. They are considered in the West as a way of spreading democracy, and essentially represent a method of non-violent overthrow of an objectionable government.

As President of the Russian Federation Vladimir Putin said in his address on Crimea 18 in March of this year, the countries where the “color revolutions” were carried out were imposed standards that in no way corresponded to their lifestyle, traditions or culture of these peoples. As a result, instead of democracy and freedom - chaos, flashes of violence, a series of coups. The Arab Spring has been replaced by the Arab Winter.

Of course, we are primarily concerned with attempts to implement projects of “color revolutions” in the area near the Russian borders, in the territory of our neighbors. It is clear that such actions are directed against Russia.

The theme of “color revolutions” was raised a few days ago at a meeting of defense ministers of the SCO member countries in Tajikistan. Together we need to take a closer look at this phenomenon, which does not carry anything good for the peoples of the neighboring countries and Russia. We will talk about this at the Moscow Conference on International Security, which will be held on 23 – 24 in May. We are pleased to take part in the discussion of this issue through non-governmental and academic institutions.

An extreme example of the implementation of the toughest version of the “color revolutions” is Ukraine.

All necessary characteristics of events in this country were given by President of the Russian Federation Vladimir Putin. A few days ago, in Tajikistan, the Minister of Defense of the Russian Federation, Army General Sergei Shoigu, warned the current leadership of Ukraine about the danger of advancing with neo-Nazis and encouraging Russophobic sentiment, which could turn into a tragedy not only for Ukraine but also for all of Europe.

In these conditions, Crimeans raised the question simply and clearly. Openly and honestly, people expressed their will to be with Russia. Now we are together with more than two million Crimeans.

A few words about the actions of the Russian Ministry of Defense in these conditions. When there was a threat to the life of the civilian population of Crimea and the seizure of Russian military infrastructure by extremist organizations, units of the Black Sea fleet strengthened the protection of Russian military facilities.

As Shoigu stressed at the board of the Russian Defense Ministry 4 April, “during the event, the Russian Federation did not violate any bilateral agreements with the Ukrainian side, as well as its international obligations. The quantitative indicators of the personnel of the Black Sea Fleet in terms of personnel and military equipment did not go beyond the permissible limits ”.

And now, in my opinion, the most important thing that the minister said: "Thanks to the high moral and volitional qualities, good preparation and endurance of the Russian military, we managed to prevent bloodshed."

In connection with the situation in Ukraine, we are faced with external opposition. Sanctions are imposed on us, we are threatened with punishments. Military cooperation with NATO and individual states of the alliance has been curtailed. Our diplomats have even been restricted access to the headquarters of the unit. That's just funny.

The results of the meeting of NATO foreign ministers 1 – 2 in April in Brussels showed that the alliance was defeated by hardliners to contain Russia, to give our country the appearance of an enemy, a long-term adversary.

Some NATO members do not hide the fact that, not opposing cooperation with Russia, they pursued only one goal - to make our country behave on the international scene as the North Atlantic bloc states need. There are calls from Brussels to reconsider the package of previous agreements on Russian-NATO cooperation.

Statements regarding missile defense, which some countries are already openly considering, having forgotten all the previous sugary admonitions, have become more outspoken as a military counterbalance to Russia's growing "expansionist" policy. All this only confirms our previous assessments: missile defense in Europe in the framework of its current plans is aimed at undermining the nuclear deterrent forces of Russia.

We drew attention to the plans of some NATO countries to place on their territory near the Russian borders a large military potential of the North Atlantic bloc, which completely contradicts the agreements with NATO. New airplanes appear, the alliance’s teachings are becoming more frequent. In general, we are talking about the very fuss on our borders, about which Vladimir Putin spoke.

Against the background of the Ukrainian events, NATO’s growing attention to the situation in the post-Soviet space is clearly visible. The contacts of NATO members with representatives not only of Ukraine, but also of Moldova, Georgia, have become more frequent. Those forces in these countries that are in favor of further rapprochement with NATO are being urged on.

Schemes are not new. We see what NATO members are doing in Ukraine to prevent normalization of relations with us. Horror stories are replicated in relation to the Russian Armed Forces. There is a tough uncompromising information war.

In recent days, Western media have tightened their messages about the "thousands" of Russian troops on the Russian-Ukrainian border. That says about 220 thousands of personnel, then about 80 or 60 thousands. On April 7, at an emergency meeting of the OSCE Permanent Council and the OSCE Forum for Security Co-operation, the US Permanent Representative again attacked us with unsubstantiated accusations.

In this propaganda frenzy, hardly anyone will take our word for it. However, with Western countries we have an objective criterion for evaluating the military activities of states. This is the regime of transparency and confidence in the field of conventional weapons - the Open Skies Treaty and the Vienna Document on Measures to Strengthen Confidence and Security of 2011 of the Year.

We strictly fulfill obligations under these agreements. So, only recently, eight inspection teams visited the territory of Russia. And twice our objects and areas of deployment of troops along the Russian-Ukrainian border were checked by the Ukrainian military. In addition, we received inspectors from the USA, Canada, Germany, France, Switzerland, Poland, Latvia, Estonia, Finland in our territory. Apparently, "by chance" most of the inspection teams (seven missions) were interested in the regions adjacent to the Ukrainian borders.

Foreign missions were given the opportunity to talk with the command of the Russian units and units, take pictures of the locations of personnel and military equipment, monitor them on the routes of movement.

The conclusions that the foreign partners made during the final briefings (and this is an obligatory procedure of inspection work) boil down to one thing - the Armed Forces of Russia do not lead to any undeclared military activity that could threaten the security of neighboring states.

As for the “freezing” of NATO’s military cooperation with us, I want to say that we calmly take this step. We are equally interested in interacting with the alliance as our colleagues.

At this stage, we adequately reacted to the Alliance's unfriendly policy towards us, having withdrawn our military representative for consultations. We are analyzing the military component of cooperation with NATO. We will closely monitor changes in the nuclear and anti-missile policy of the alliance.

We will not allow the transformation of military calls from NATO into a threat to military security for our country. We will act neatly, to the point, without the emotions with which the current actions of NATO towards Russia are so complete.

Ctrl Enter
Noticed oshЫbku Highlight text and press. Ctrl + Enter
We are
Military reform as an integral part of the security concept of the Russian Federation: Systematic dynamic assessmentNikolay Silaev, Andrei Sushentsov: Georgia after the elections and prospects for Russian-Georgian relations
Military Reviewin Yandex News
Military Reviewin Google News
22 comments
Information
Dear reader, to leave comments on the publication, you must sign in.