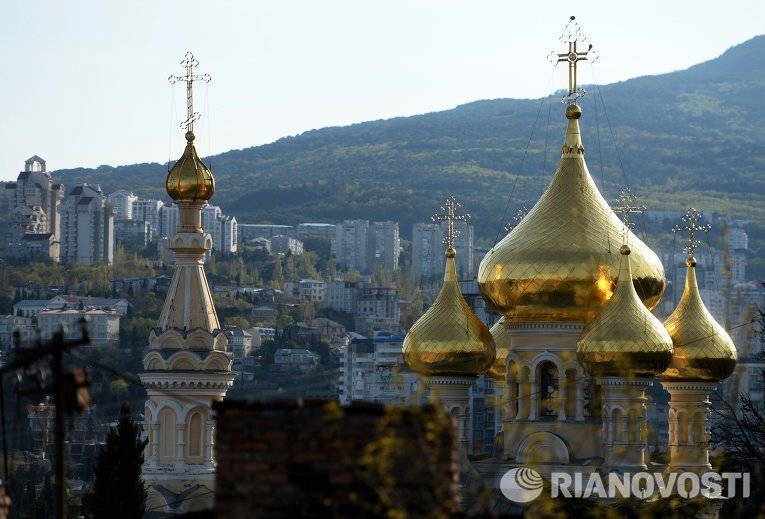 And no people "Crimean Tatars" simply does not exist

It is clear that Russia’s desire to protect itself for the future from the problem of the Crimean Tatars. Only to solve it by assigning them the status of "indigenous people of Crimea" is unproductive.

For at least three reasons.

Firstly, because the very fixing of the name “Crimean Tatars” behind them was already one of the problems associated with them, and it was the linguistic convention of their time that did not reflect objective reality.

Secondly, because in fact it is not even about one ethnos, but about several, with different destinies and different ethno and cultural genesis.

Thirdly, because they have never been the indigenous people of Crimea.

The name "Crimean Tatars" as such appears after the reunification of the Crimea with Russia in the last quarter of the XVIII century. And it meant only one thing: "Crimean Muslims." Because then in Russia in general, all Muslims were called Tatars, without investing anything offensive in that word.

In this regard, as a branch of the Tatar-Mongol invasion, it was the Khan's army that could be considered Tatars, and the Crimea was perceived as a “Tatar kingdom”, similar to the Kazan kingdom, and caused certain emotions. But with those who inhabited the Crimea at that time, Russia, as a rule, did not encounter and knew little about who inhabits it.

And when Crimea was reunited with Russia, all its Muslim inhabitants were called that. Although even Islam they professed at different times - from 10-20 to 400 years.

Tatars (that is, those who could be called Tatars) who came to the Crimea during the Tatar-Mongol invasion - this is almost the latest wave of ethnic migration to the Crimea, which never formed the basis and most of its population.

Once there lived the Taurus and Cimmerians. Then the western part was settled by the Scythians, the eastern part - those who can be called "Meotians"; geographically it was one of the peoples of the future Russia, who inhabited Taman, Kuban and Don. But that was a long time ago.

True, let's say, Lomonosov considered the Bospor kingdom inhabited by them to be the source of Russian statehood.

Later, approximately in the 2nd-4th centuries of our era, the so-called Chernyakhov archeological culture, which Academician Rybakov considered as one of the first Slavic cultures on the territory of Russia, was spread in Crimea. Within this interpretation, the Chernyakhov culture is a kind of “culture of the Hellenized Slavs”, which became the basis of their future statehood and historical and cultural elevation.

In the 4th century, the Goths, that is, the Germans, being forced out of the Black Sea region by the Huns. Their state in the mountains of Crimea existed almost until the XV century and was defeated by the Turkish invasions.

Since ancient Greece and Rome, and then Byzantium, the coast of Crimea was inhabited by Greeks. Then, in the XIV-XV centuries, the Genoese, that is, the Italians inhabit the southern coast.

Each of these peoples — Germans, Greeks, and Italians — had much more reason to be considered the indigenous people of the Crimea than the Tatars who got there the later. Although they were not indigenous to the Crimea.

In the 5th century there were Turks here. In the VII century - the Bulgarians. In the 8th century, the Byzantines divided Crimea (that is, at this moment the Greek-Slavs) and the Khazars. By the end of the 8th century, the Ruses (future Russians), led by Prince Bvrann, came to the eastern Khazar part of the Crimea. They took Surozh and baptized there two hundred years before Vladimir.

At the beginning of the 10th century, the struggle of the Rus and Khazars took place here. In the tenth century, Oleg and Svyatoslav defeat the Khazars, and in the Crimea the Russian Tmutarakan principality, which is then part of Kievan Rus, emerges. That is, the Crimea, in fact, is the same hotbed of Old Russian statehood, like Kiev and Novgorod.

In the XII century, the Polovtsi appear here, at the beginning of the XIII century, they are still fighting with the Russians against the first Turkish landing, and in 1223, the Tatar-Mongols invade here, and the steppe Crimea becomes the Horde ulus. In the XIV century, the Genoese settled the southern coast, and then invades, trying to free the Crimea from the Tatars, the Russian-Lithuanian army of Vitovt. And in 1399, the Tatars Edigei destroy the last stronghold of the ancient world - Chersonese.

With the Ottoman conquest of Byzantium, their troops repeatedly invade the Crimea - and the Tatar khans conclude an alliance with them, becoming vassals of Istanbul ...

Where can I see the Tatars as the indigenous population of the Crimea? You can think of this only in the framework of political speculation. Anyone - but not they.

They then came to the Crimea as conquerors and destroyers. And even after the conquest, they did not constitute the bulk of the population of the Crimea. Relying on the previous, in particular, ancient Russian culture, they created their own, and for that time not the most primitive civilization. But they always remained a minority in their state. It was a state that somehow resembled the English colonies or South Africa of the second half of the twentieth century: the dominant Islamic ethnic minority and the enslaved Orthodox majority.

For the Crimea, they were something of a moor for Spain. And as Queen Isabella carried her vows until the country's complete liberation from the conquerors and the liberation of Grenada, so Russia has fought for centuries trying to liberate its ancient territory.

The Spanish managed to liberate Grenada on 400 years before Russia liberated the Crimea. But the Moors came to the Pyrenees in the VIII century, the Tatars in the Crimea - in the XIII century. The Moors have been there for 800 years, but no one intends to declare them the indigenous people of Spain. Tatars, if we take from the complete conquest of the Crimea by them, - 400 years, if from the first invasion - 600. And they are trying to declare them an indigenous people, although I repeat once again: they never made up the majority of the population of Crimea.

In the middle of the XVII century, the Khans carried out a census of the population. According to these data, the population of the Crimea was 1,1 million people. Tatars among them were 180 000, 920 000 people were designated as "Orthodox". They were different - the descendants of the Greeks and Genoese, Armenians, Goths, but most were prisoners, slaves and remnants of the Russian population, as well as immigrants from the territory of the former Kievan Rus.

That is, the Tatars were a little more than the current - about 16%. But they were the masters who had enslaved the Crimea — nobles, warriors, slave owners who forced the indigenous (largely Slavic) population of Crimea to work for themselves.

Another thing is that those who after the reunification were called the Crimean Tatars did not belong to them. In the conditions of the Russian-Turkish wars and the retreat of Turkey by the second half of the 18th century, the policy of evicting Orthodox from the territory of the Crimea began to be pursued in the Crimea, as the authorities at that time were afraid that Russia would be able to rely on them when the Crimea was liberated. And the indigenous Orthodox population of Crimea was forced to either leave it or convert to Islam in order to remain in their homeland.

Therefore, if we talk about recovery historical justice, it would be necessary first of all to recognize that the people of the "Crimean Tatars" simply do not exist.

And that there are at least three different nations, each of which played a different role in history and has the right to restore its historical name, historical culture and awaken its national identity, most of which they were deprived of precisely the Mongol-Tatar and Turkish invasions, their domination and violent Islamization.

Each of them played a role. But no one has the right to claim for himself the name "indigenous people of Crimea".

Ctrl Enter
Noticed oshЫbku Highlight text and press. Ctrl + Enter
We are
As the Crimean Tatars stabbed in the back of Russia in the years of the revolution and the Civil WarVasily Kashirin: Russian troops entered Bessarabia and liquidated the Bujak Tatar horde at the start of the Russian-Turkish war of 1806-1812.
Military Reviewin Yandex News
Military Reviewin Google News
51 comment
Information
Dear reader, to leave comments on the publication, you must sign in.