"Davai Volodia!" or Putin as Louis XIV of the French unconscious 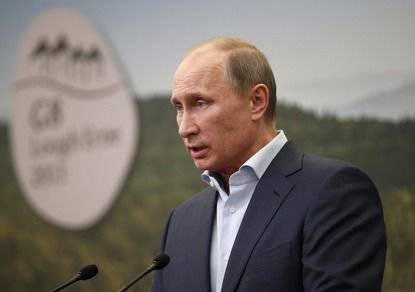 French journalists in a slight bewilderment. As the Ukrainian crisis grows, the mood of their readership becomes more pro-Putin. Any material about what is happening in Eastern Europe, whether it is an ordinary informational message, or an analytical article, collects on the websites of the largest publications an unprecedented number of radical comments glorifying the political “genius” of the Kremlin sovereign.
Here are the comments on news about the first victims of the confrontation in Slavyansk, published on Sunday on the website of the newspaper Le Figaro.

"Now Putin has every right to intervene. And he will not keep himself waiting."

"The West is a miserable loser who adds fuel to the flames of democratic and legitimate demonstrations. I am ashamed that I am a citizen of a NATO member country."

"Europe can congratulate itself on the Eastern front and in the connivance of the United States, who think only of" grandmas "and shout at the same time about freedom and democracy. The spiral of violence is untwisted and ends in disaster, unless the people of the two countries are smarter than their rulers ".

"Some deserve to be taught a good lesson. Come on, Volodya!" (the last phrase in the original is written in Latin letters in Russian - "Davai Volodia!")

A few dozen comments - one expressing condolences to the families of the victims, and one calling for the raising of NATO aircraft and the bombing of Russian Tanks. All the rest are approximately in the same vein as those quoted above.

"Figaro" - newspaper right. And its audience is appropriate. And since the Soviet times, the French Gaullists have been suspected of sympathizing with the Kremlin. But the left "Liberation" publishes the material under the heading, involuntarily prompting the reader to the correct answer: "Is Moscow's hand behind the flash of aggression in Ukraine?". Here the balance of power of online commentators is about fifty to fifty.

"The hand of Moscow? The West has no evidence. And don't the American and European secret services work there all the time?"

"The West has missed this Ukrainian mess and now Putin will give them all a boomerang effect."

"- Why does this question mark in the title? Do you have doubts about Putin’s involvement? Or are you nostalgic about" Great Russia?

Political analyst Pierre-Henri d'Argenson from the University of Paris Sciences Po, who was interviewed by Figaro, considers something surprising. “In fact, it’s not so much the number of“ pro-Russian ”comments,” he says, “as the unconscious refusal of many French to succumb to a media injection that represents Putin’s Russia as an evil empire. This is a new intellectual rebellion that reveals a deep rejection of the dominant ideological order. Internet makes this rebellion of free expression of opinions more accessible. In the coming years, we will see how this suspicious attitude towards "obligatory thoughts" on one or another occasion will acquire more and more historical character. "

According to surveys, only 14 percent of the French in general have a positive attitude towards the activities of Vladimir Putin (data from the middle of January at the BVA Sociological Institute). However, from the same poll it follows that, experiencing hostility and fear as leader of Russia to Vladimir Putin, the majority of citizens of the Fifth Republic would not mind at all if such a leader would lead their country. 72 percent of the French consider it full of energy. 56 percent sure that he skillfully protects the interests of his people. 60 percent believe that under the leadership of Putin, Russia will become an increasingly powerful power.

Compare this data with a survey published last Sunday about the popularity of Francois Hollande (18’s total support percent, the lowest for all history country result), and much will become clear. The French, who even voted for him two years ago, are increasingly calling their “normal president” half-man, rohley and impotent.

“Here, of course, there is an element of seduction by the character’s“ masculinity ”, continues political analyst Pierre-Henri d'Argenton.“ It’s a mixture of composure and militant audacity. But the deep reason is still different. The collective unconscious of the French catches in the image of Vladimir Putin that then from Louis XIV. Absolute monarch. Authoritarian, but able to protect the Russian people from the powerful. French mainstream media does not understand this. When Putin orders to arrest Mikhail Khodorkovsky, it involuntarily resembles , as Louis XIV ordered the arrest of Fouquet (one of the richest people in France and the Minister of Finance under Louis XIV. - AB) This is tyranny, but the people see their interest in what is happening: if the king is able to depose the powerful of the world, then he can protect the interests of ordinary people. "

Ctrl Enter
Noticed oshЫbku Highlight text and press. Ctrl + Enter
We are
"Who are you," Shooter "?"Denis Davydov: In the struggle for Internet sovereignty, Russia won
Military Reviewin Yandex News
Military Reviewin Google News
44 comments
Information
Dear reader, to leave comments on the publication, you must sign in.