Leonid Ivashov: South-East. It is important not to force events 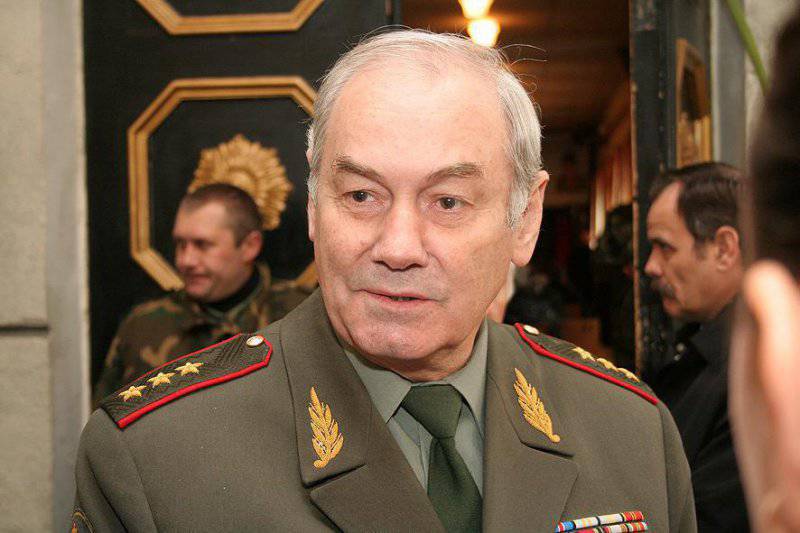 The retired colonel-general Leonid Ivashov, President of the Academy of Geopolitical Problems, is one of the leading military analysts in Russia, and at the moment, in connection with the situation in Ukraine, is one of the most popular ... This country (then the Soviet republic) studied with of youth - it was possible to serve in Transcarpathia in due time ... As for the Crimea, then that the peninsula will return to Russia, General Ivashov spoke even more 10 years ago, when both Russia itself and its foreign policy were completely different. And the newest history Ivashov entered 1999, during the American aggression in Yugoslavia. At the time, Colonel-General Ivashov, head of the Directorate-General for International Cooperation of the Ministry of Defense of the Russian Federation, was the initiator of the legendary Pristinsky Throw of Russian paratroopers. With Stavropol Leonid Grigorievich have strong friendships - for example, with the Stavropol Cossack army ... Therefore, the first question I asked the expert was, as it were, a continuation of the conversation with the ataman SLE that in troubled times Ukraine is undergoing cooperation between the Cossacks living on different sides of the state border, not only does not collapse, but, on the contrary, is growing stronger.

- And how important is such a human moral, or, as they say, humanitarian support (at the level of relations of ordinary people with ordinary people), when Ukraine is at the epicenter of geopolitical processes?

“Very important,” says the expert. - The big mistake of Russia was that we were concentrated in relations with Ukraine in economic and military-political aspects. At the same time, we missed the most important component - the cultural and civilizational space (science, education, culture, art, and much more). As a result, got what we have today. Our market economy is a competitive environment, which is constantly sharpening contradictions. And at whatever price we sell gas, it always causes and will cause a certain amount of wariness. The second point to which I would like to pay attention. We constantly claim that all Ukraine is our brothers ... Plus, depending on the position of Ukraine, we have long been building the information process in the post-Soviet space. I was a participant in many meetings at the level of heads of state and heads of government, Council of Ministers of CIS countries. And at all these meetings, Ukraine appeared as an ardent oppositionist of Russia, trying to slow down any integration processes. For example, Nazarbayev’s very strong integration project was rejected due to the fact that he was not supported by the Ukrainian leadership ... Why did this happen? ... The fact is that we have a split of the cultural and civilizational space in Ukraine itself.

- Well, now it is obvious to everyone.

- Ukraine, in principle, is not united. And when we say: "fraternal culture", we must understand that this is not quite so. Yes, of course, a part of the population is close to Russia and the territories that we gave Ukraine to different centuries in order for Ukraine to be loyal to us. Here, indeed, the Russian spirit, and Russian roots, and the Russian mentality.

But the majority of Central Ukraine is inhabited by Ukrainians, who do not consider themselves Russians. Not to mention the western, formed on the surrogate of different cultures. Civilization is not Europe, not Russia, and in fact not even Ukraine. They are always looking for a patron. It was used from outside at different times, and is currently used by the same Americans. Ukrainians seem to be beckoning to Europe, and at the same time they put conditions: in order for us to take you, you must confront Russia. And this is not only today's reality, it has been so for centuries. Since the time of Bohdan Khmelnitsky, when the hetman Vigovskoy began to conclude alliances against Russia (the so-called Uncle Union), and then Mazepa, Petlyura, Bandera ... permanently appeared there.

- In the 20-s of February, during the period of an avalanche-like and dramatic development of events on the Maidan, you strongly condemned Russia's long-term political inaction. And the annexation of the Crimea was called a brilliant geopolitical operation. Before asking the next question, I will quote an excerpt from your interview: “We wait, then silently retreat. We need to reach the Volga, and only then turn around and go to Berlin. This is a century-old tradition - remember the campaign of Napoleon. In Russia, from time immemorial, they believe in honesty, sincerity. We appeal to international law, international agreements, the UN Charter. And our overseas partners spit on them. We need to end with illusions. It's a shame that we lost time by believing in the agreements reached. This did not allow us to stop the difficult development of the situation in Ukraine on distant approaches ”... Now the question is - how do you assess the fact of the quadripartite talks in Geneva and the Agreement directly between Russia, Ukraine, the United States and the European Union? Is there any hope that someone will do this?

- In the document signed on Thursday I don’t like much. But as a military diplomat, I know that agreements on such complex issues are possible only on the basis of compromises: we have given up something, the Americans have conceded something, the European Union agreed to something ... It is important that this compromise is forced, it is not dictated good intentions of our foreign "partners", and the fact that the situation began to develop not according to the scenario that they laid. The Crimea returned to Russia, and the situation in Donetsk, Lugansk and other regions demonstrates a real possibility that the Southeast will either leave Ukraine or acquire a high degree of autonomy. Attempts to suppress protest by military force are doomed, and a civil war in Ukraine can be beneficial only to the local oligarchy and the Americans. European countries, like us, do not need any war at their own borders. That is, the solidarity of Europe and Russia played a certain role in the signing of this agreement on some issues ... It is hard to say whether or not the Geneva agreements will be implemented. Most likely, selectively. They are perceived by the parties in different ways. For example, the current Kiev elite considers the clause on the “release of captured buildings and institutions” solely as a requirement for the South-East. At the same time, if you take a closer look at the document, you must first release the government offices and buildings, and the ministerial chairs, as illegally seized. The same is true with the disarmament of illegal armed formations ... In addition, this document is advisory in nature. The OSCE and PACE (an absolutely Russophobic organization) will “observe” the implementation of the agreements. So everything will be submitted against Russia. What is already happening. They recognized that the ban on Russian citizens (men up to 60 years) from entering Ukraine is legitimate, although this is unprecedented stupidity.

“Still, South-East of Ukraine is waiting for help from us.” And the question arises: what do we do in this situation? After all, Southeast is not the Crimea, where our fleet is based, and accordingly forces and means are provided to protect it, where there is a very special mentality ... It is clear that residents of Donetsk, Lugansk, Slavyansk, Kramatorsk do not want to live according to the laws that came to power fascist junta. But then there are only solid questions: do they want to stay in Ukraine or do not want to, or, like the example of the Crimea, do they want to go to Russia? Is it still possible to introduce our troops to Ukraine? Or NATO? .. The agreement that opens up the possibility of NATO, because there is ...

- Yes, Ukraine has an agreement on the possibility of providing its territory under NATO. It was concluded in the spring of 2004. Ukraine has no such agreement with Russia. So the likelihood that NATO troops will enter there exists ... Now, about the prospect of entering our troops ... Both Russian President Putin and Foreign Minister Lavrov have repeatedly stated that we have no desire to enter there. Yes, most likely, we pulled up some parts of the border forces, some parts brought on high alert. This is always done when tensions arise in a neighboring state. This is a classic. But now it’s really unprofitable for us to send troops to Ukraine, either for military or political reasons or for economic reasons. And the question is who will invite us there. So no need to do this, unless, of course, the fascist power in Kiev does not dare to massive bloodshed. In this case, we will be forced to intervene. But in order to prevent this, it is necessary to negotiate with the CIS on the formation of peacekeeping forces. And we also need to think about the formation of international courts - within the framework of the BRICS group or the same CIS, of which Ukraine is still a member. For some reason, we believe that the international community is only the United States and Europe (and in fact only the United States). The legal field for some reason set the Americans. But now a new world is being formed, which is going to the East ... Now about that: do the citizens of the South-East want or do not want to enter Russia? There is an extremely ambiguous situation even in a single Donetsk region. There are towns that would vote for it even tomorrow, others just want more independence and autonomy. In Kharkov and other large cities it is still more ambiguous. So no need to force events. And it's not only in the South-East of Ukraine, but also in ourselves - whether we have enough economic and financial potential. You see how problematic everything is now in the banking sector in the Crimea. There are other problems ... The fact that we now support the federalization of Ukraine, the autonomy of the Southeast, is the best solution at the moment.