Capture of the police department in Kramatorsk 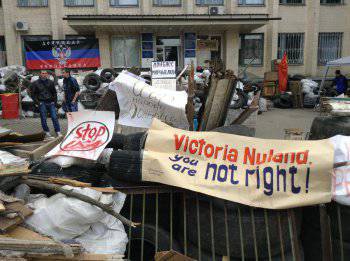 
As noted by RIA News", at the time of the seizure in the building of the SBU, there was only one person on duty who did not hinder the activists who hoisted the flag of the Donetsk Republic on the gate.

It should be recalled that 22 of February of this year, the Ukrainian Verkhovna Rada ousted President Viktor Yanukovych from power, changing the constitution and calling the elections for May 25.

From the beginning of March, rallies in support of federalization began in Donetsk, Lugansk and Kharkov. Unrest began after the decision of the new authorities of Ukraine to repeal the law, which gave the Russian language a special status in the eastern regions of the country, as well as to appoint new governors.

The main requirement of the participants of the action is to hold referendums on the status of their regions.

Ctrl Enter
Noticed oshЫbku Highlight text and press. Ctrl + Enter
We are
The situation in the south-east of Ukraine. Chronicle of events. 3 MayCaptures of state institutions in the Donetsk region: St. George ribbons and suspicious "green men"
Military Reviewin Yandex News
Military Reviewin Google News
27 comments
Information
Dear reader, to leave comments on the publication, you must sign in.