April 21 2014
105
Hello to you from the quiet Zaporozhye. Here is a parallel reality. Here is the world (this is when shooting in another place). Here, minor incidents did not shake the established way. 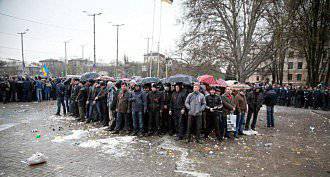 People work, study, steal, fall in love, are treated, born, die. The pipes smoke, the atom splits, the fat is salted. People are waiting for the tsunami to subside, the storm will subside, the troubled time will end. Someone (your humble servant, for example) understands your head off, what the meat grinder is just beginning to unwind, but it has not yet reached the spinal cord, so we sit on the ass exactly ... for now.

Here is the frontier. Here the land is a draw. Here, the influence of both ideological systems forms in their heads a fancy cocktail of slogans, instincts, myths, reality and patterns.

Here Khortytsia is the sacred heart of Eurasia, yeah

Here, the beginning of Ukraine is the epic Sich, which had all of them in mind, and from which Father Hop led bratus-Cossacks to cut ... no, not pshekov, but lords (you will pick up the modern analog

), because then there was no Nazism or nationalism (who likes what term more

). Here, the Walk-field, from which Father Makhno led the brothers to cut ... no, not the Germans, but the lords

(Hans accidentally fell under the distribution - they, the war veterans, no one explained what kind of meat grinder they climb

It seems to me that the main abscess is not Kiev-Lviv and Donbass. There are flowers

Here puswho is still just ripening. And then the father will appear ... and the buttocks will be full of berries.