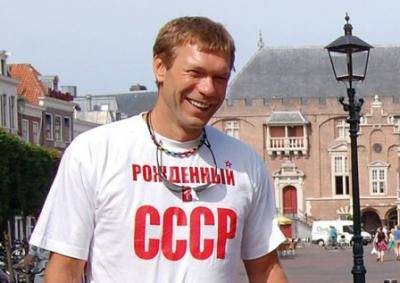 In recent days, the information space is filled with all sorts of messages that relate to the protest movement in the south-eastern regions of Ukraine. The fact that at the talks in Geneva for the first time spoke about the South-East as an independent political entity, really aroused the Kiev authorities.


In an effort to prevent the subsequent evolution of the South-East protest movement and turning it into an independent participant in the negotiation process, the leaders of the illegal government in Kiev and the political forces in charge of them from abroad and inside the country made a number of attempts to lure certain representatives of the protesting Southeast for meetings and negotiations.

The motive of these attempts is obvious. The illegal power in Kiev, firstly, is afraid of what the Southeast will speak in its own voice, both domestically and internationally. And then to pretend that in the South-East Kiev is opposed only by invaders, terrorists and separatists, it will not succeed. Secondly, Kiev is attempting to wind up the protesting regions in endless round tables and negotiations in order to organize “silent” repressions under their cover and to nullify the protest.

Here we want to turn separately to the oligarchs of the South-East. If you want to keep your business and influence - within the framework of the law and the democratic process on the life of our regions, then you should negotiate with the people and their representatives, and not with representatives of the illegal Kiev government! Otherwise, the people who rebelled and assert their right to the sovereign will treat you the same way as the illegitimate authorities in Kiev.
Who offers us negotiations and what promises does it give? In the afternoon, Yulia Tymoshenko turns to the US Congress for military assistance, and in the evening of the same day meets with the protesters for a dialogue. He gathers his own army for the “march to the east” and at the same time speaks of peace. This is the height of cynicism and double-dealing.

Other representatives of the Batkivshchyna party, who are still at the head of the illegal government in Kiev, promise constitutional reform, an increase in the rights of the regions, and decentralization, and a special status of the Russian language.

But after the Kiev authorities unleashed a disgusting Russophobic campaign, after the residents of Donbass were declared cattle and people of the second grade, after Kiev sent an army and militants "under cover" for the war with its people to the eastern regions, no promises illegal authorities and its representatives can not be trusted. Their goal is to deprive us of UNITY AND WILL. We must not give in!

Dialogue is possible only AFTER the fulfillment of a number of requirements. Two main requirements that can contribute to the de-escalation of the conflict in the spirit of the Geneva agreements and at the same time are the CONDITIONS of the beginning of the dialogue:

1. Disarmament of the “Right Sector” and other radical nationalist groups.
2. The dissolution of the National Guard, which became a "cover" for the militants of the Maidan and radical nationalist groups.
3. Release of ALL political prisoners without exception and termination of criminal cases against them. Only after these mandatory requirements have been fulfilled, one can try to start a dialogue between the Coordination Council of the Southeast movement and the self-appointed Kiev authorities.

In addition, you must call a spade a spade. What we need is not decentralization - a sop from Kiev, but federalization, that is, first the acquisition of political, cultural and economic autonomy by our regions, and then, on the good will of regional residents, the delegation of some of this authority to the federal center.

We do not need any special status for the Russian language - it is enough to make it the second state language and consolidate this status in the Constitution. We need a constitutional reform, but then all elections should be held not BEFORE, but AFTER the constitutional reform. And no region of the Southeast removes the requirement to hold a regional referendum.

The remaining requirements of the South-East can be found in the declaration of the Coordination Council of the Southeast movement, which was conveyed to the participants in the international negotiations in Geneva. We are still confident that only through dialogue we can, having avoided bloodshed, begin to build a new Ukraine.

But this should be an honest dialogue, in which the parties operate not with empty promises, but with concrete steps. And the first steps were taken by the Kiev authorities, since it was they who launched the flywheel of violence in the country.

Ctrl Enter
Noticed oshЫbku Highlight text and press. Ctrl + Enter
We are
What you didn't want to know about EnglandInterview by President Bashar Al-Assad to the Sunday Times
Military Reviewin Yandex News
Military Reviewin Google News
199 comments
Information
Dear reader, to leave comments on the publication, you must sign in.