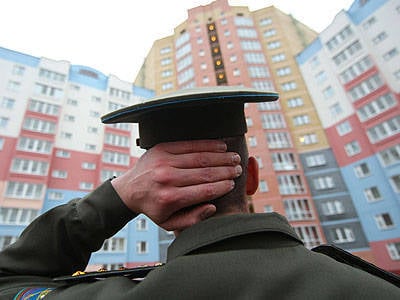 Despite serious progress in providing housing for servicemen, it has not yet been possible to solve all the problems in this matter. It is on this basis that the Public Chamber's (National Chamber of Commerce) Commission on National Security Issues formed a Public Expert Council (ECO) on housing for military personnel, the first meeting of which was held on April 10. The council included more than 30 representatives of government, public organizations and the media. "In this composition, we will be able to restore order, strike corruption schemes that affect one of the most acute problems of military personnel - provision of official and permanent housing," said Alexander Kanshin, head of the national security commission.

According to him, the members of the expert council will conduct an examination of the legislative and regulatory acts related to the observance of the rights of military personnel to provide them with residential premises. Their tasks will include checking complaints and statements of servicemen and veterans, as well as traveling to the regions to monitor the situation with the implementation of the housing program. “The work of the expert council will be carried out in close cooperation with the Main Military Prosecutor’s Office, the Accounts Chamber of Russia, other control bodies, as well as the Public Council of the Ministry of Defense, public councils of law enforcement agencies on the issues of housing for servicemen and their families,” said Kanshin.

Already at the first meeting of the ECO, a teleconference was organized with Sevastopol, where representatives of the Black Sea fleet talked about their problems with the provision of housing. In particular, it was noted that apartments for military personnel of the Black Sea Fleet built in Sevastopol with the money of the Moscow government cannot be privatized. Moreover, this problem has not been solved for several years. “We appealed to many authorities, but in the end, complete misinformation reached the top.

All the facts about which we wrote were distorted by representatives of the local prosecutor's office through which they walked - instead of them some kind of “water” was written, which had nothing to do with the case, ”one of the Black Sea sailors, Sergei Nesov, resented. According to him, all the answers and conclusions received from the departments are based on lies. “I don’t send a complaint to the European Court, because it will not be a complaint, but a“ bomb ”that will be used against Russia, and that’s what everyone wants today. I do not want this because of patriotic feelings - I want to find a law in the Russian Federation, ”said Nesov.

Alexander Kanshin promptly responded to the statements of the Black Sea. During the ECO meeting, a decision was made in late April - early May in Sevastopol and Simferopol to hold a retreat meeting of the Public Chamber. Representatives of the created council, the Chief Military Prosecutor’s Office, the Department of Housing Support of the Ministry of Defense of the Russian Federation and the Government of Moscow are planned to take part in its work. Igor Kuznetsov, a representative of the housing department of the military department, who was present during the conversation with the Black Sea population, assured the people of Sevastopol that the transfer of housing to the property of the Black Sea people discharged to the reserve would be resolved soon. “The corresponding powers of attorney are being prepared for the staff of the JO who will soon go to the Black Sea Fleet,” he said. In addition, during a conversation with Sevastopol, Kanshin contacted Alexander Galkin, commander of the Southern Military District, during a tele-bridge during the teleconference. "Colonel-General Galkin has just announced that 2000 apartments are allocated to the Sevastopol line through the Ministry of Defense of Sevastopol," said the chairman of the OP commission.

The meeting also revealed other problems related to the provision of housing for military personnel. It was noted that there are built military camps, which are still not inhabited by military families. Houses stand idle, the state suffers losses. This was possible because the military units that were to be formed and stationed in the military camp were relocated to another place. Many such decisions are related to the activities of the team of former Defense Minister Anatoly Serdyukov. At the ECO meeting, it was proposed to contact the leadership of the country in order to solve this problem. Attention was also paid to the neglect of the housing stock in remote garrisons.

There are other problems. Say, Yuri Tarlavin, chairman of the Primorye organization of the All-Russian Trade Union of Military Personnel, told NVO that the military and the navy still have a document on the procedure for providing service housing for military personnel signed in September 2012. Some "Instructions" that did not pass legal and public expertise, but determine the procedure for issuing and registering military personnel and their family members in official apartments. According to this document, the FMS does not have the right to issue a certificate of permanent registration to all those living in office living space, but only a certificate of temporary residence. As a result, there are numerous difficulties that infringe the social rights of servicemen and their families. If the serviceman husband divorced his wife, then, according to a document signed by Serdyukov, she is evicted from a service apartment without providing her with another living space, which is contrary to the Housing Code of the country.

These problems, of course, will be analyzed in the OP. The OP Commission on National Security has called for informing her of any violations of the rights of servicemen on housing issues. “On the basis of the received appeals, our experts will work out recommendations that we will send to the country's leadership,” Kanshin notes. The head of the commission also announced that the next ECO meeting will be held on May 22.