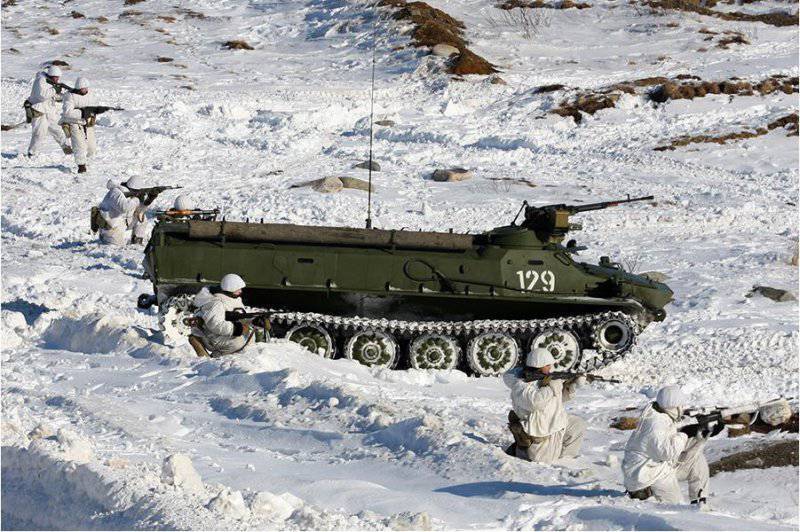 The aggravation of relations between Russia and Western countries is caused not only by the crisis in Ukraine. There are many “earthquake-prone zones” where the interests of Moscow and Washington collide, and where an open confrontation between two worlds can begin at any time. One of such “warming up points” is the Arctic rich in natural resources. The underlying struggle for the mastery of this region has already unfolded: the states, between which the Arctic Ocean shelf is divided, are trying to take control of other waters. Russia is involved in this confrontation: it rightfully owns a huge area of ​​the shelf, and it must be protected from the attacks of its neighbors.

Melting ice in the waters of the Arctic Ocean exposed the innumerable riches of the Arctic. First of all, we are talking about oil and gas reserves: thanks to the gradual retreat of the ice line, mining companies have the opportunity to develop fields without using expensive technologies. This will reduce the cost of Arctic oil and gas and lead to an increase in profits from the sale of these resources.

In addition, thanks to the melting of glaciers, new sea routes appeared. This means that geologists and oil workers have gained access to previously unexplored areas of the ocean, where, according to expert estimates, even more mineral deposits can be found. Thus, new hydrocarbon fields have recently been discovered in the Kara and Pechora seas belonging to Russia. It turns out that the Russian wealth beyond the Arctic Circle multiplies by itself, it remains only to reach out and take. And it will be easy to do, because domestic enterprises have extensive experience in building infrastructure from scratch in regions with unfavorable climate.

The Arctic contains about 15% of the estimated global volume of unexplored oil and 30% of unexplored gas reserves. Five countries have the right to manage these resources - Russia, Canada, USA, Norway and Denmark. Countries in the Arctic region can legally be engaged in mining for the 200-mile maritime zone extending along their territorial waters.

Over the past few years, the Arctic states have been able to develop rules on the exploitation of the resources of the Arctic Ocean. The Arctic Council was established to address issues related to the development of gas and oil deposits outside the Arctic Circle. To avoid conflicts, all countries in the region have agreed to work closely together.

However, the diplomatic tools developed in the past years, are beginning to give the first failures. In conditions when the shortage of resources in the world makes itself felt, the temptation to take over the untold wealth of the Arctic is growing. In addition, with the melting of ice, gas and oil are becoming more accessible, as if luring to themselves all sorts of fans to profit from Darmsmith.

Attempts to grab a bigger piece will inevitably lead to the start of an arms race beyond the Arctic Circle. There will be a militarization of the region: the United States, together with its allies, is guaranteed to try to push Russia out of the Arctic back into its special economic zone, using the methods of diplomatic and military pressure.

The melting of the Arctic ice and the emergence of new sea routes allows you to quickly move the fleet to the Arctic. Of course, in winter, the waters of the Arctic Ocean are still unsuitable for navigation, but in summer, the possibilities for maneuvering increase. Global warming is doing its job.

The press center of the US Navy declares that they are ready to increase the American presence beyond the Arctic Circle. Soldiers and officers are planned to be sent to the region for military service in the cold Arctic. But the United States has no enemies in the Arctic. Why keep the army in the tundra, where there is no threat? The answer is obvious: America does not want to defend itself, but to attack. And the US military, accustomed to the northern climate, in the future can be used in any of the regions located above the Arctic Circle. At the same time, the characteristics of vessels used in the waters of the Arctic Ocean are improved.

Washington considers itself to be the leading military-political force in the Arctic. His goal is to establish his own order in the region, which, by the way, goes against Russian interests. The United States is not alone: ​​almost all members of the Arctic Council, with the exception of Russia, are on their side. Norway, Denmark and Canada support the expansionist policy of the United States, and are even ready to join the American adventure.

For example, this year Norway, together with other NATO countries, organized and conducted the Cold Response military exercise. Those countries that are not members of the North Atlantic Alliance, namely Sweden and Switzerland, took part in the exercise. Participants in military maneuvers practiced operations under extreme conditions of the Arctic. Norway’s NATO partner, Canada, also conducted exercises, but not international, but independent. And the exercises took place in winter, that is, at a time when the North is the least hospitable. The maneuvers were attended by thousands of Canadian 4 military personnel.

Russia is ready for adequate action in response to the reinforcement of militaristic rhetoric by the states of the North Atlantic Alliance. So, in March, immediately after the end of military exercises in Canada, four Russian strategic bomber appeared in the sky of the Arctic. You can be sure that this hint, understandable to the Canadian military, did not go unnoticed, and in Ottawa will do everything possible to avoid confrontation with Moscow. At least in the near future: it is impossible to exclude that Canada will take hostile actions against Russia as soon as it receives the go-ahead from the United States.

Russia, in turn, is counting on the prudence of the countries participating in the Arctic Council and urges them to peacefully resolve any conflicts one way or another connected with the division of the shelf and water area of ​​the Arctic Ocean. Indeed, according to experts, the disunity of the northern states will prevent them from developing the region’s natural wealth: the Arctic climate is too inhospitable. The exchange of technologies and cooperation in various sectors of the economy will allow the countries of the Arctic Council to achieve the conquest of endless northern spaces.

Fortunately, except for Russia, this is understood in Europe. Norway and Denmark, unlike the USA and Canada, are more inclined to search for compromises with Moscow, and are ready to make concessions on some controversial issues. Norway is an important partner of Russia, and will suffer greatly if it enters into an arms race.

Especially dangerous for Norway is open conflict with Russia. The fact is that the Norwegian oil and gas platforms off the northern coast of the Scandinavian Peninsula are practically unprotected and very vulnerable. It will not be difficult to disable them, causing serious damage to the energy industry in Norway. At the same time, we must remember that the countries of Western Europe are buying Norwegian gas, and they will not be satisfied with the military adventurous Norwegian authorities.

As for Denmark, it has no contradictions with Russia, but Copenhagen is acting under pressure from its NATO allies, including the restless United States. And over time, Denmark may lose a place in the Arctic Council altogether: Greenland seeks independence, and the Danes can do nothing about it.

However, in the capitals of all northern countries they understand: it is necessary to unite for the sake of cooperation in the Arctic. Many are not ready for confrontation, although they are wary of their neighbors. At the same time, unity in each country of the Arctic Council is understood in its own way: for some it is ensuring equality and freedom of action, and for someone it is a frank dictation in relation to partners. If the arms race in the Arctic Circle begins, it will be triggered solely by the US desire to fundamentally suppress any attempts at a fair division of resources. And Russia should not lose this war: if it demonstrates the strength and readiness to defend its position using any means, then it will have political partners even in the harsh Arctic.