Zionists and anti-Semites in Ukraine: a strange alliance

April 18 2014
117
Surprisingly, the national-socialist ideology of Bandera, which is heavily mixed with anti-Semitism, triumphed in Kiev, ensured the complete triumph of the most odious figures from the standpoint of this ideology — oligarchs, and even activists of the world Jewish movement like Igor Kolomoisky. This is a striking example of how seemingly mutually exclusive political forces can enter into unprincipled and unnatural alliances in order to achieve short-range goals, without thinking about long-term consequences. 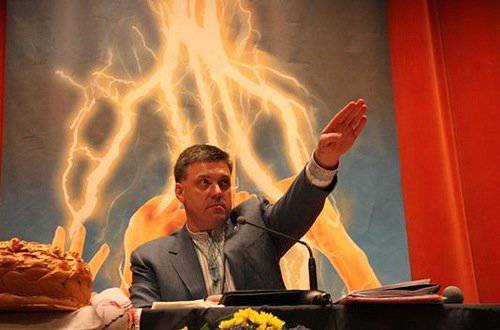 Such a symbiosis due to its extreme contradiction can not last long. Both partners are playing a dangerous game around who will outwit anyone. Some risk becoming an early confirmation of the old truth that revolutions are devouring their own children; others may face the rage of extremists and incur pogroms. There are already signs of both in Ukraine: Sashko Bilogo was shot here, there are stylized “Right Sector” swastikas - “wolf hooks” - appearing in synagogues all over Ukraine, such as, for example, recently in Odessa. 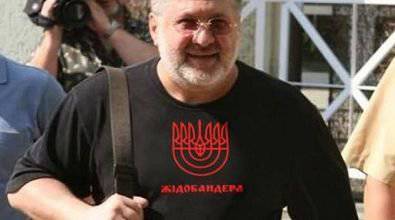 The slogan of the ultranationalist “Bandera come - bring order!” Sounds like “Kolomoysky come - put things in order!” Kolomoisky, the third most wealthy man in Ukraine, everywhere claims that he is an Israeli by citizenship and president of the Jewish Congress of Europe, and this did not prevent him from being appointed Head of the Dnipropetrovsk region. With him and his money, this area has turned into a real hotbed of newly-minted policemen from the “Right Sector”, which are distributed throughout the country. And before that, he, along with the worldview close to him, Petro Poroshenko, was one of the main sponsors of the Maidan. Some of the most disappointed, the most radical participants in those events, such as members of the White Hammer organization, have already rebelled against what they were openly “used” for, as they say, of the “Zionist coup” in Ukraine. They point to the origin of the Prime Minister A. Yatsenyuk, the Deputy Prime Minister V. Groysman and many other leaders of the new regime. The Jewish roots of the “White Russians” are also found in their former comrades-in-arms, the chairman of the Svoboda Party, O. Tyagnibok, and the leader of the Right Sector, D. Yarosh.

However, how did it happen that Kolomoisky, who is not shy about wearing a T-shirt with the inscription “Zhodober” (apparently, he invented this special form), forgot about the role that members of the Ukrainian nationalist movement played in Stepan Bandera during the war years in exterminating the Jewish population of Ukraine? And why does he refuse to see the ideological continuity between them and their current followers from Freedom and the Right Sector? Why so vehemently hates Russia? One of his henchmen, commanding hundreds on the Maidan, Nathan Khazin said that there he did not see any manifestations of anti-Semitism and that “it’s better to be a Zhanobanderovite than a liquidomosclean. Are the thirst for money and power, as well as the unwillingness to allow anyone else to their “plot”, into which Kolomoisky and his comrades have turned the whole of Ukraine, can blind to such an extent? Contrary to the obvious facts, the Association of Jewish Organizations and Communities of Ukraine continues to insist that nothing threatens the Jews in the country. However, if you know that the chief rabbi of Kiev and Ukraine, Jacob Bleich, arrived there from New York, it is understandable where this illusion is created. It is extremely inconvenient for Washington to recognize that as a result of its actions, the position of the Jews in Ukraine may deteriorate.

In Israel, for example, the flirting of the current leaders of the Jewish community of Ukraine with outright anti-Semites is puzzling to many. “Jews, engaged in politics in an unstable state, in which the government condones or deliberately ignores nationalist anti-Semitic groups, play with fire,” writes one of the Internet resources. On February 27, a member of the Knesset Rina Frenkel (“Yesh Atid”) addressed the head of government with a request to draw up a state program for the repatriation of the Jews of Ukraine. In her opinion, the Jewish community of Ukraine "is in obvious and immediate danger." Deputy Moshe Feiglin ("Likud") at the Knesset hearing also stressed that the situation in Ukraine should be a "wake-up signal at the strategic level" for the Israeli government. According to Feiglin, the political processes in Eastern Europe and the deep economic crisis in the West can create pressure on all 6 of millions of diaspora Jews. Referring to the "most cautious" estimates of demographers, the parliamentarian said that in the coming 10 years at least 1,5 million Jews could repatriate. He urged the government to begin early preparations for such a development. The chief rabbi of Chabad, Rabbi Reuven Asman, advised his members to leave Ukraine urgently.

Israeli public opinion, differently than Kolomoisky, assesses Russia's actions in the Ukrainian crisis. So, according to one of the polls, only 35% believe that the Crimea is the territory of Ukraine and should remain part of this state. 60% agree with the referendum and its entry into Russia. At the UN General Assembly, despite pressure from the Obama administration, Israel did not vote for a resolution condemning Moscow for joining the Crimea. And the well-known Israeli publicist Avigdor Eskin spoke very vividly about the position of the Jewish oligarchs of Ukraine: “Well, we also have our own Vlasovites”.

Does not believe in the rebirth of modern Bandera, as if by a team claiming that they are not anti-Semites, and one of the prominent activists of the movement for the freedom of exit of Soviet Jews, Iz Liebler. He writes in the Jerusalem Post: “These are truly neo-Nazi parties that even use fascist symbolism — a stylized swastika and openly show their anti-Semitic views.” “The leader of the Svoboda party, Oleg Tyagnibok, who heads the largest right wing of the extremist nationalist bloc, which has 37 seats in parliament and controls the power unit in the government, has repeatedly called for the liberation of Ukraine from the Moscow-Jewish mafia.” Before 2004, his movement was called the Social-National Party of Ukraine (a reference to National Socialism). ” Most vividly, his statement is characterized by: “Personally, I have nothing against ordinary Jews, I even have Jewish friends. I am against the Ukrainian-controlling oligarchs and Bolshevik Jews. ”

And yet how strong is the strange anti-Semitic-Zionist political alliance that has developed in Ukraine? It is hard to believe that both its parties do not wait for that favorable moment when they can get rid of each other. It seems that the “unique rogue” I. Kolomoisky (in the figurative expression of V. Putin) is still one step ahead. The “Right Sector” no longer requires the continuation of the “anti-oligarchic revolution”, but dispersed throughout the country in the form of punitive “sonderkommando”, suppressing popular protests in the South-East. However, events are developing in such a way that very soon the Black Bandera force will probably declare that it has been “betrayed.” And then she will make a recent ally one of those guilty of her inevitable defeat. However, Igor Kolomoisky, and in this case, probably has some plan.

Ctrl Enter
Noticed oshЫbku Highlight text and press. Ctrl + Enter
We are
On the other side of the “red” and “white”. Izborsk Club ReportWe and Ideology
Military Reviewin Yandex News
Military Reviewin Google News
117 comments
Information
Dear reader, to leave comments on the publication, you must sign in.