Crimea. Difficulties of the first stage

April 18 2014
57
In particular, during the direct line with Vladimir Putin, the country learned that after the reunification of the Crimea and Sevastopol with Russia on the peninsula, there are many pressing issues that require an immediate solution. The reunification itself inspired the overwhelming majority of both Crimean residents and other residents of Russia, but it is now, in fact, that real reunification begins, in the way of which many problems arise: from social to financial and economic. In order to solve these problems in the near future, it is necessary to make considerable efforts both from the federal authorities and from the regional (Crimean and Sevastopol) authorities, and against this background, do not forget to react to the signals that come from various Russian citizens regarding the evolving situation. . 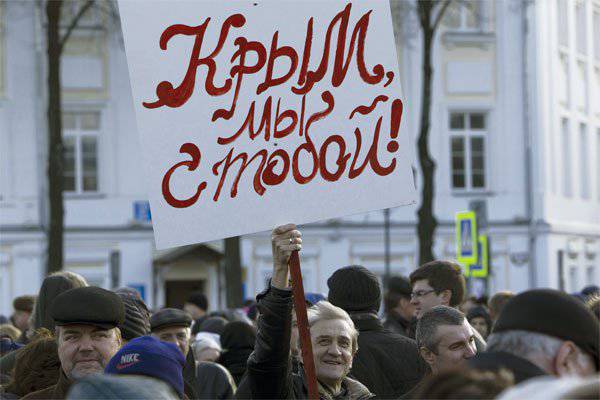 One of the main problems that today manifests itself on the peninsula is the problem with the turnover of funds. Today, in the territory of the Republic of Crimea and in Sevastopol, the largest Ukrainian banks, whose depositors were hundreds of thousands of Crimeans, have turned their activities. Many in the bank accounts remained substantial amounts, which today turned out to be actually stolen banks from their own investors.

One of those banks that have curtailed their activities in the Crimea after its reunification with Russia, and curtailed, criminally taking with them deposits of the Crimeans, is Privatbank. The main owner of this financial institution is the notorious Igor Kolomoisky. As you know, today Kolomoisky appointed self-proclaimed authorities of Ukraine to head the Dnipropetrovsk region.

In the course of communication with citizens, the Russian president said that within about a month a fully functioning domestic banking network would be created on the territory of the Crimean Peninsula, which would avoid difficulties in the financial turnover segment. Speaking about the problems that have arisen with the Ukrainian banks that left the Crimea, Vladimir Putin said that negotiations are underway with their leadership, but so far no positive agreements have been reached. If the Ukrainian bankers will continue to be so categorical, isn’t it time to think that, in connection with the theft of Kolomoisky, the companions of the personal savings of citizens in the Crimea in relation to Beni will have a criminal case?

Another of the topics related to the reunification of the Crimea and Sevastopol with Russia, and, in particular, the financial component of this process, was raised by a resident of the Krasnoyarsk Territory. The man, addressing Vladimir Putin in a direct line, said that teachers at one of the local schools at the meeting were told that their salaries would be cut by 20%. The reason was explained as follows: they say, for the needs of the Crimea. And this, it must be admitted, is far from the only case when residents of various regions of Russia report a certain “Crimean” percentage that they are going to retain from them the leadership of companies and institutions.

This question was answered not only by the president, calling it a blatant fraud, but also by members of the State Duma.
On the United Russia website Appeared material, which presents an explanation of the situation from the deputy Nikolay Bulaev. He noted that the funds allocated for state employees go within the framework of a protected item of expenses, and therefore it is simply impossible to redirect them to any other needs.

The president rightly noted that it is immoral to speculate on such things. Hope no one does. Teachers ’wages are managed by the region. Accordingly, funds for teachers' salaries are allocated from regional budgets. Naturally, none of the Russian regions donated funds from their budgets to the budget of Crimea, and could not transfer them. The Budget Code will not allow this. I am sure that the region has already dealt with this situation.

To speculate is immoral, and this is understandable. However, today there are many individuals who want under the guise of good intentions just to fill their own pockets. The scammers, it seems, do not stop anything, and therefore law enforcement agencies need to respond to such signals immediately, otherwise the “overworking” of the scammers may well lead to exacerbation of the situation around the Crimea.

The great problem of today's Crimea is its artificial subsidy. For two decades, the Ukrainian authorities have done everything so that the economy of the peninsula does not develop at the pace that it could develop. From it, the colossal amounts of financial resources were withdrawn, not without “help”, by all those oligarchs who today claim to steer the whole of Ukraine. The very concept of “Crimea is a subsidized region” looks awkward, but the terrible thing is that it is so. Modernization, re-equipment, large-scale investments are needed by industrial enterprises, agriculture and even the tourism business. After the Crimea ceased to be part of Ukraine, the latter decided to make an attempt to arrange a real blockade for the peninsula. Already today, the supply of fresh water to the peninsula has been significantly reduced, the volume of electricity supply is reduced. Crimeans, apparently, Kiev is trying to "put in a corner" in this way because they decided to demonstrate their will.

The inhabitants of the Crimea, the new citizens of Russia, need to sympathize, the process of reunification is a thing, however cynically it sounds, unpolished. It just so happened: to lose - to lose, but with associations it was not at all wondered ... And often far from our will. Therefore, today almost everything relating to the topic of unification is a novelty not only in the Crimea, but in the whole of Russia.
But sympathy will not help the cause. To prevent the Crimea from becoming a island from the peninsula due to the demarches of Kiev, the Russian authorities are already actively working on financial and technical support for the Crimea and Sevastopol. In the near future we plan to build not only a bridge (tunnel) from the Krasnodar Territory, but also to lay a pipeline (conduit) along the bottom of the Kerch Strait, which will be able to supply fresh water to the regions. Indeed, without the necessary amount of fresh water, the agriculture of the region can simply stand up, and this is a huge blow to the economy of the Crimea. The plans include a substantial modernization of the military-industrial complex enterprises on the peninsula, investments in the tourism sector, and transport infrastructure.

The number of problems today is large. But this is not a reason to clasp your head with your hands or beat it against a wall, reproaching yourself for your own determination. Both the Crimea and the rest of Russia realize that all these difficulties will be overcome, that Kiev provocations ultimately, if they strike at someone, first of all, those self-appointed authorities who today hold their seats in the Ukrainian capital.

The main thing is coordinated work. Work aimed at the full integration of the Crimea into the all-Russian space. And it’s really not necessary to tell about the potentials of the solar peninsula. And the main potential is people. People who can say their weighty words, who can defend their interests. As the classic said: nails would make of these people - there would be no stronger nails in the world! Today it is exactly about Crimeans and Sevastopol.