Tsar Cannon is not a cannon at all: What stands in the Kremlin 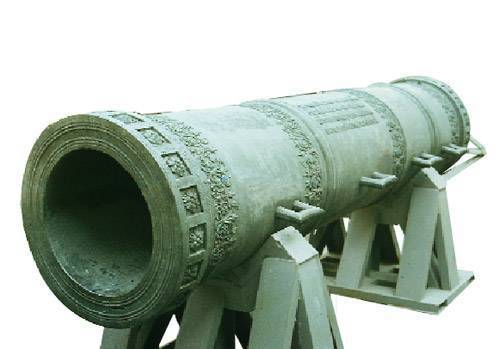 Tsar Cannon has long been one of the symbols of Russia. Almost no foreign tourist leaves Moscow without examining the miracle of our technology. She entered dozens of anecdotes, which featured the Tsar Cannon that had never fired, the Tsar Bell that had never called, and some non-working miracle Yudo of the H-3 lunar rocket.


In a row with the Tsar Cannon, the poet Alexander Roslavlev even erected the famous monument to Alexander III by Trubetskoy:

Third wild toy
For the Russian serf:
There was a king-bell, a king-gun,
And now the king ...

But, alas, our venerable historians and dissident anecdators around are wrong. Firstly, the Tsar Cannon fired, and secondly, this weapon is not a gun at all. 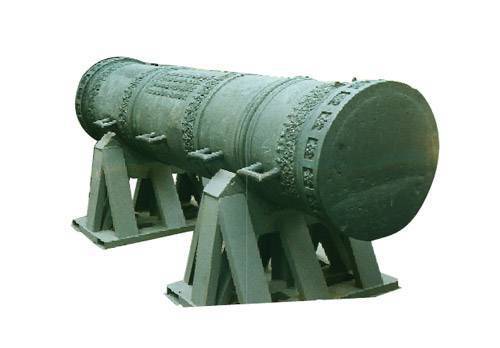 But I will start in order. The Tsar Cannon was cast by the famous Russian master Andrei Chokhov (up to 1917, he was listed as Chekhov) by order of Tsar Fedor Ioannovich. Giant guns weighing 2400 in poods (39 312 kg) were cast in 1586 at the Moscow Cannon Yard. The length of the Tsar Cannon is 5345 mm, the outer diameter of the barrel is 1210 mm, and the diameter of the thickening at the barrel is 1350 mm.

Currently, the Tsar Cannon is located on a cast-iron decorative gun carriage, and next to it are decorative cast-iron cores, which were cast at the iron foundry of Byrd in 1834 in St. Petersburg. It is clear that it is physically impossible to shoot from this cast-iron gun carriage, nor to use cast-iron cores - the Tsar Cannon shatters smithereens! The documents about the Tsar cannon tests or its use in combat conditions have not been preserved, which gave grounds for long disputes about its purpose. Most historians and military men in the 19th and early 20th centuries believed that the Tsar Cannon was a shotgun, that is, an instrument designed to shoot shot, which in the 16th – 17th centuries consisted of small stones. A smaller part of the specialists generally excludes the possibility of using the gun in combat, considering that it was made specifically to frighten foreigners, especially the ambassadors of the Crimean Tatars. Recall that in 1571, Khan Devlet Girey burned Moscow. 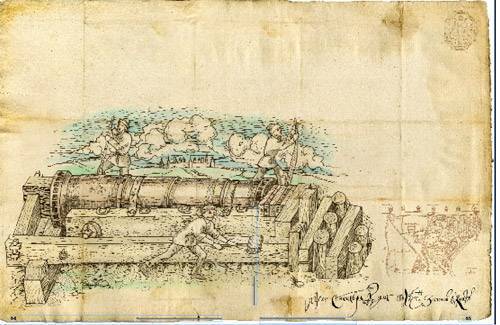 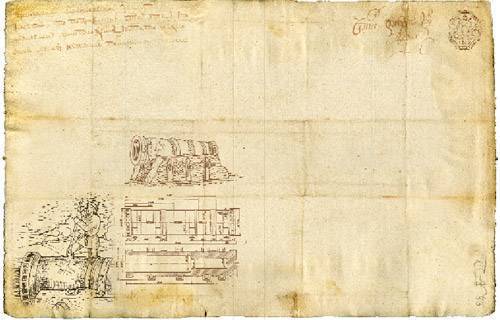 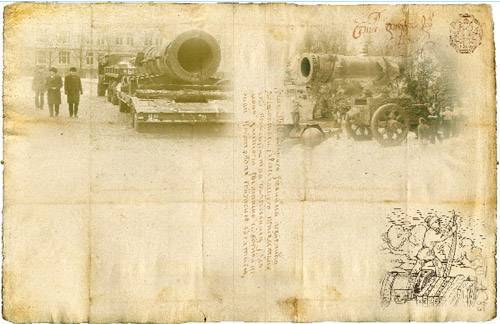 In the XVIII - early XX centuries, the Tsar Cannon was called in all official documents a shotgun. And only the Bolsheviks in the 1930-s decided for propaganda purposes to raise its rank and began to magnify the gun.

The secret of the Tsar Cannon was revealed only in 1980, when a large automobile crane removed it from the gun carriage and placed it on a huge trailer. Then the powerful KrAZ took the Tsar Cannon to Serpukhov, where the cannon was repaired at the factory of the military unit No. 42708. At the same time a number of specialists of the Artillery Academy. Dzerzhinsky made her inspection and measurement. The report was not published for some reason, but from the preserved draft materials it becomes clear that the Tsar Cannon ... was not a cannon!

So this is a classic bombard!

For the first time bombers appeared at the end of the XIV century. The name "bombard" comes from the Latin words bombus (thunder sound) and arder (burn). The first bombardments were made of iron and had screw-bolts. So, for example, in 1382, in the city of Ghent (Belgium), the Mad Margaret bombardment was made, so named in memory of the Countess of Flanders, Margarita the Cruel. Bombardy caliber - 559 mm, barrel length - 7,75 caliber (klb), and the length of the channel - 5 klb. Gun weight - 11 t. “Mad Margaret” fired stone cores weighing 320 kg. The bombardment consists of two layers: the inner one, consisting of longitudinal welded strips, and the outer one - of 41 iron hoop, welded to each other and with the inner layer. A separate screw chamber consists of a single layer of discs welded together and is provided with sockets where the lever is inserted when it is screwed in and unscrewed.

On loading and aiming large bombards spent about a day. Therefore, during the siege of the city of Pisa in 1370, each time the besiegers prepared to make a shot, the besieged would go to the opposite end of the city. The besiegers, taking advantage of this, rushed to the attack.

The bombardment charge was no more than 10% of the core weight. Axles and carriages were not. The tools were placed on wooden decks and log cabins, and piles were hammered in the back or brick walls were erected for emphasis. Initially, the angle of elevation did not change. In the 15th century, primitive lifting mechanisms were used and copper bombardments were cast.

Note that the Tsar Cannon has no trunnions, with the help of which an elevation angle is attached to the instrument. In addition, it has an absolutely smooth rear section of the breech, with which, like other bombers, it rested against a stone wall or frame.

By the middle of the XV century, the most powerful siege artillery was at ... Turkish Sultan. Thus, during the siege of Constantinople in 1453, a Hungarian caster Urban cast a copper bombard of an 24 inch (610 mm) caliber to the Turks, shooting stone cores weighing about 20 pounds (328 kg). It took 60 bulls and 100 people to transport it to the position. To eliminate the rollback, behind the gun the Turks built a stone wall. The rate of fire of this bombard was 4 shot per day. By the way, the rate of fire of large-caliber Western European bombardment was about the same order. Just before taking Constantinople, the 24-inch bombardment exploded. At the same time, its designer Urban himself died. The Turks appreciated the high-caliber bombers. Already in the 1480 year, during the battles on the island of Rhodes, they used bombers 24 – 35-inch caliber (610 – 890 mm). The casting of such gigantic bombarding required, as indicated in old documents, 18 days.

In 1868, over 20, huge bombardments still stood on the forts defending the Dardanelles. There is evidence that during the Dardanelles operation 1915 of the year, the English battleship Agamemnon had hit an 400-kilogram stone core. Of course, it could not penetrate the armor and only amused the team.

Let's compare the Turkish 25-inch (630-mm) copper bombard, cast in 1464, which is currently stored in the museum in Vulwich (London), with our Tsar Cannon. The weight of the Turkish bombard 19 t, and the total length - 5232 mm. The outer diameter of the barrel - 894 mm. The length of the cylindrical part of the channel - 2819 mm. Chamber length - 2006 mm. The bottom of the chamber is rounded. Bombard fired stone cores weighing 309 kg, gunpowder weighed 22 kg.

Bombarda once defended the Dardanelles. As you can see, externally and on the device of the channel, it is very similar to the Tsar Cannon. The main and fundamental difference is that the Turkish bombard has a screw breech. Apparently, the Tsar Cannon was made on the model of such a bombardment.

So, the Tsar Cannon is a bombardment designed for firing stone cores. The weight of the Tsar-cannon stone core was about 50 pounds (819 kg), and the cast-iron core of such a caliber weighs 120 pounds (1,97 t). As a shotgun, the Tsar Cannon was extremely ineffective. At cost, instead of it, it was possible to make 20 small shotguns, which require much less time to load - not just a day, but only 1 – 2 minutes. I note that in the official inventory “At the Moscow Arsenal of Consisting Artillery” # 1730 copper and 40 cast iron shotguns were counted on 15 for the year. Pay attention to their calibers: 1500 pounds - 1 (this is the Tsar Cannon), and then follow calibers: 25 pounds - 2, 22 pounds - 1, 21 pounds - 3, etc. The largest number of shotguns, 11, is in the 2-pound caliber.

And yet she shot

Who and why recorded the Tsar Cannon in shotguns? The fact is that in Russia all the old guns that were in the fortresses, with the exception of mortars, were automatically transferred to shotguns over time, that is, in the case of the siege of the fortress, they had to shoot (stone) with shotgun, according to the infantry on assault. It was inexpedient to use old guns for firing cores or bombs: what if the guns were blown apart, and the new guns had much better ballistic data. So the Tsar Cannon was recorded in shotguns, in the late XIX - early XX centuries the military forgot about the orders in the smooth-bore serf artillery, and civilian historians did not know at all, and by the name "shotgun" decided that the Tsar Cannon should be used exclusively as an anti-assault guns for shooting "stone shot".

The point in the dispute, whether the Tsar Cannon shot, was put in 1980 by experts from the Academy. Dzerzhinsky. They investigated the canal cannon and, for a number of signs, including the presence of particles of burnt powder, concluded that they shot from the Tsar Cannon at least once. After the Tsar Cannon was molded and trimmed at the Cannon Yard, it was dragged to the Spassky Bridge and laid on the ground next to the Peacock Cannon. # To move the cannon, ropes were tied to the eight brackets on its trunk, 200 was simultaneously tied to the ropes horses, and they rolled a gun lying on huge logs - rinks.

Initially, the Tsar and Peacock guns lay on the ground near the bridge leading to the Spasskaya Tower, and the Kashpirov’s gun at the Zemsky order, located where it is now Historical a museum. In 1626 they were lifted from the ground and installed on log cabins densely packed with earth. These platforms were called roscates. One of them, with the Tsar Cannon and the “Peacock”, was placed at the Frontal Place, the other, with the Kashpirova Cannon, at the Nikolsky Gate. In 1636, wooden roskats were replaced by stone ones, inside which warehouses and shops selling wine were arranged.

After the "Narva confusion", when the tsarist army lost all the siege and regimental artillery, Peter I ordered urgently to pour new guns. The king, necessary for this, decided to mine by melting bells and antique cannons. By “nominal decree” it was “ordered to pour into the cannon and mortar casting the Peacock cannon, which is in frontal place on the rossate; the Kashpirov gun, that of the New Money Court, where the Zemsky order was; the “Echidna” cannon, which is near the village of Voskresensky; the gun "Krechet" core pud ten pounds; the Nightingale cannon with the 6 core of pounds, which is on the square in China. ”

Peter, because of his ignorance, did not spare the most ancient tools of the Moscow casting and made an exception only for the largest tools. Among them, of course, was the Tsar Cannon, as well as two casting mortars of Andrei Chokhov, which are currently in the Artillery Museum in St. Petersburg.

Ctrl Enter
Noticed oshЫbku Highlight text and press. Ctrl + Enter
We are
Obvious Things About a Moon ScamThe poet of the village. Sergey Alexandrovich Yesenin
33 comments
Information
Dear reader, to leave comments on the publication, you must to register.