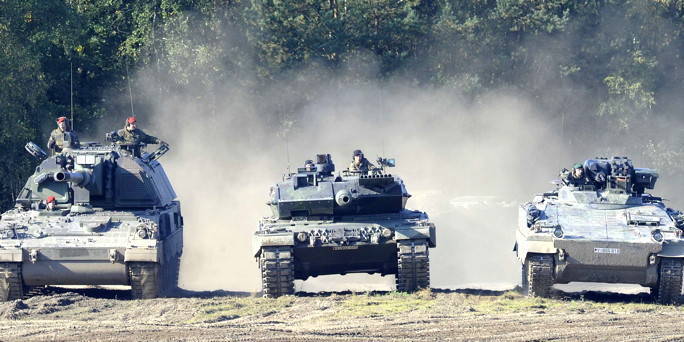 Russian Deputy Defense Minister Anatoly Antonov said on Wednesday on the Vesti 24 TV channel that NATO troops in Europe have a threefold advantage in tanks and armored vehicles in front of the Russian.


"NATO has 10 thousand tanks in Europe, and we have 3,5 thousand. NATO has 22 thousand armored vehicles, we have about 7,5 thousand. This is a good example," RIA quoted him as saying "News».

At the same time, the deputy minister stressed that Russia is in compliance with all international agreements.

Thus, in the framework of the agreement on the destruction of medium and shorter-range missiles, Russia destroyed about a thousand ballistic and ground-based cruise missiles, eliminated 825 launchers and more than 3 thousands of nuclear warheads.

The deputy minister added that information that Russia allegedly threatens Ukraine and Europe with a military invasion is "nonsense."

“All the horror stories that Russia is hanging over Ukraine today, and tomorrow Russia will almost not reach the English Channel, Bordeaux and the Cote d'Azur - all this is nonsense. We are engaged in normal daily activities aimed at increasing the combat readiness and combat capability of the Armed Forces, ”said Antonov.

“All these figures from the evil one are elements of dishonest information war,” said Antonov. He recalled that over the past month, seven inspections were carried out at the border of Russia and Ukraine, and the inspectors had the opportunity to photograph military convoys and communicate with commanders.

“Following the results, we were not told that any activity is causing concern,” the deputy head of the military department concluded.

On the eve, NATO Secretary General Anders Fogh Rasmussen reported that the alliance received recommendations from military experts to strengthen the defense capability of the alliance, some of them can be applied soon.

Before that, he said that NATO does not discuss military actions in connection with the situation in Ukraine, and noted that it is necessary to find a political solution to the conflict.

Answering the question whether the deployment of NATO permanent bases in Eastern Europe is possible, he said: “We are now considering further steps to strengthen our collective defense, as I noted, they also include what I would call an adequate deployment (of forces). But it is still a bit early to go into the details of how we specifically strengthen our collective defense. ”

Rasmussen expressed concern about the events in the east of Ukraine and called on Russia to de-escalate the crisis. He is convinced that Moscow is “trying to determine and dictate the course to Ukraine,” and has already threatened Russia with “deeper international isolation.”

Before that, NATO tried to substantiate its position on the situation in Ukraine by publishing a response to the main, from the point of view of the North Atlantic alliance, arguments of Russia.

As stated by the Russian Foreign Ministry, NATO does not care about the speediest normalization of the situation in Ukraine, but uses the political crisis in this country as an attempt to rally the ranks in front of an imaginary external threat.