US decided to drive Russia into a trap 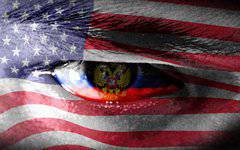 We do not need to send troops to Ukraine to influence the situation, the expert recalled


Ukraine is not only a battlefield between the West and Southeast. Without too much exaggeration, it can be said that this is a battlefield (perhaps even decisive) between Russia and the West for the re-shaping of the "unipolar" world.

The fact that Russia will show itself in the struggle for the Ukrainian rebelling Southeast depends largely on whether the final complete collapse of the US hegemony or Russia will firmly establish itself in the status of such a power that it will be risky to exclude from somewhere own reputation.

In the meantime, the West is still trying to humiliate Moscow with sanctions, thereby implicitly emphasizing who is the only owner in the big house, who is the guests, and who is the attendants. And Ukraine is important as a strategically important test.

There is a growing suspicion among political analysts: everything that is happening in Ukraine is painfully similar to the banal provocation of Russia. The West needs Moscow to introduce military equipment (already publicly, without polite "green men") and get hooked. As an aggressor.
Then it will be possible to deduce Russia on the wave of rising indignation from really serious and decisive organizations, as well as to introduce NATO troops, deploying them a few dozen kilometers from Moscow.

“The United States decided to kill two birds with one stone. First, write in your "asset" half of Ukraine. Secondly, to put Russia in an unfavorable light ... Thus, a state appears on the new "Ukrainian-Ukrainian" border, for which the return of lost "eastern territories" can become a national idea, the deputy director of the National Institute of the development of modern ideology Igor Shatrov.

The current perspectives of Ukraine and Russian participation in its fate were discussed by a political scientist, director of the Center for Geopolitical Expertise, deputy head of the Center for Conservative Research at the sociological department of Moscow State University Valery Korovin:

- The West really has as its goal to provoke Russia for tough actions, but not to respond to it from NATO, but to destabilize both Russia itself and the space between Russia and Europe in order to prevent the possibility of a strategic rapprochement between Russia and the EU.

Here, the Americans are trying to implement the same scenario that they themselves went through during their participation in the internal conflict within Vietnam. Then the Americans joined the civil war and suffered huge losses - both military and moral. This threw the United States far back in terms of positioning itself as a democratic power.

The Americans are trying to do the same for Russia: to draw it into civilian strife in the territory of the former Ukraine. At the same time, this does not mean that Russia should not intervene at all and only passively observe how, with the assistance of American instructors and CIA agents, the junta is cracking down on the population of the Southeast with military means.

Therefore, Russia must, of course, take part in what is happening, but not in a direct military way, but at the level of implementation of network technologies, through humanitarian influence, economic participation, consulting in the field of warfare and positional battles in the city, as well as means of support in including technical, military, medical, and so on.

All political transformations on the territory of Ukraine should occur with the direct participation of those entities that are emerging today in the South-East of the former Ukraine and which can serve as a source of power and a basis for the formation of a new post-Ukrainian statehood in the South-East.

It is obvious to everyone that the end of the Ukraine project is already near, that it did not take place. Ukrainian unitary statehood did not take shape, and therefore today it is necessary to proceed from the current reality and consider the options for the existence of new entities in the territory of the former Ukraine, their orientation, subjectivity and political independence.

- However, Kiev is threatening to close its borders for Russia tightly and to stop all contacts from Russia as much as possible (presumably, including through the Internet). How to implement “soft power” in such conditions?

- The fact is that those orders that are made in Kiev are untenable, also because the junta is simply not capable of ensuring their implementation. It should be understood that this is not a state power due to the fact that they have no state, no tools to maintain the existence of this state, no legitimacy, that is, support for an absolute majority, but legitimacy only from the Maidan, which by all parameters cannot be a state .

Strictly speaking, the current junta, headed by Turchinov and Yatsenyuk, is controlled only by the Maidan, the center of Kiev and several cities in the regions of the former Ukraine adjacent to Kiev. But all this can not be called a state machine, a state apparatus.

Therefore, it is necessary to calmly accept the decisions taken by these people, realizing that the reality looks completely different: it follows from the continuity of a large Russian space, including in the territory of the former Ukraine. And no forces today can stop the free movement of citizens of the former Soviet Union, carriers of post-Soviet and new Russian identity. And all these prohibitions are only a manifestation of the agony of people who seized the center of Kiev.

Russia has all the opportunities to influence the situation in the country through civil society, through public organizations, structures like private security companies, or on the initiative of volunteers from both Russia and the former Ukraine.

- How do you look at the perspective of a confederation within Ukraine?

- I must admit that at the moment the Kiev authorities have already “passed” federalization for the South-East. Now there is a coalition of independent republics - Donetsk, Kharkiv, Luhansk, and this process will continue. You can talk about the confederation of the South-East in the format of New Russia. And, in fact, federalization itself is an opportunity for Kiev to preserve the remnants of the former Ukraine, lying on the spaces of Little Russia and zapadenschiny.

And if Kiev wants to keep what he has left - Western Ukraine and the territory between Zbruch and the Dnieper - he certainly has the opportunity to turn to the federalization format, hold referendums or a general referendum for zapadenschina and Little Russia and thus preserve the remnants of what will remain after the Southeast exit from this common space.

If Kiev insists on unitarity, the process of disintegration of the former Ukraine will continue, and in the end the real picture of control by the Kiev junta will coincide with what actually exists, namely Kiev and several areas in its vicinity.

I think that, having seen enough of the oligarchs in the center of Kiev, on the Kolomoisky and Poroshenko faces that do not correspond to the Ukrainian ideal identity, they will say goodbye to Kiev and choose their path, and Kiev and the surrounding area will remain in this kind of agony, plunging into internal contradictions, chaos, poverty and total decline.

Ctrl Enter
Noticed oshЫbku Highlight text and press. Ctrl + Enter
We are
A great interview with Sergey Lavrov: about Ukraine, Obama and IranThe West without the USSR: the world goes to an ideological explosion
Military Reviewin Yandex News
Military Reviewin Google News
71 comment
Information
Dear reader, to leave comments on the publication, you must sign in.